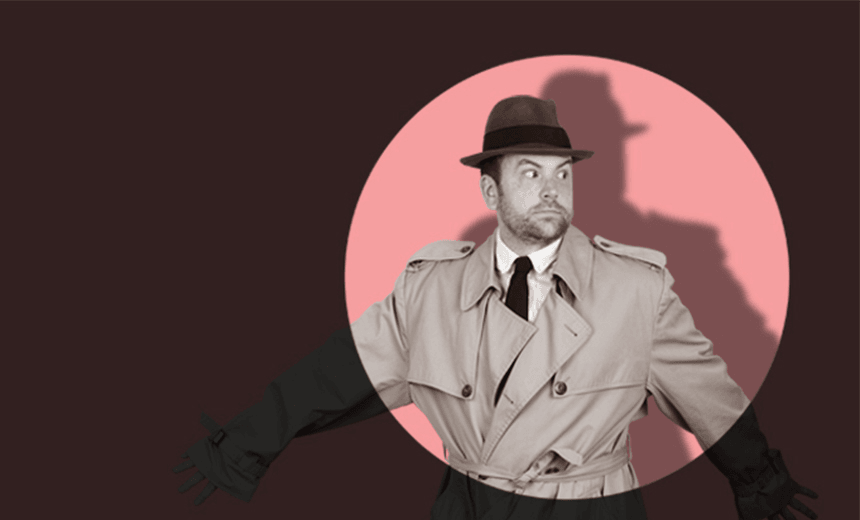 Mathman: a story by Nic Sampson

Noted funny man Nic Sampson (Jono and Ben, Funny Girls) writes us a short story about a dad, his time-travelling son and the dangers of learning about maths.

“Hey Dad I need help with my maths homework!”

Paul thought his heart might stop. This was it, it was finally happening! He dropped his World’s Best Dad mug into the sink, wiped his hands on the good tea towel and run-walked into the dining room where his son Max was working.

“What seems to be the problem, son of mine?” asked Paul coyly, fully aware from one glance of the problem Max was having with his quadratic equations. You see, despite his day job as a dentist Paul Gorman was secretly very good at maths.

Paul was so good at maths he would often joke that if he became a superhero he would be Mathman! Paul thought this was great wordplay on the superhero ‘Mothman’. Paul didn’t realise a superhero called Mothman didn’t exist and was quite possibly getting the name Batman wrong.

“Just tell me how to work this out, okay?” grumbled Max into the tablecloth.

“This looks like a job for Mathman!” Paul proclaimed loudly, startling their very old cat.

“Dad? Who’s Dad? I’m Mathman! And Mathman could tell you how to solve your equations, but wouldn’t it be more fun if he could show you?”

“Please just tell me I have so much other homework,” Max groaned.

“Let me just go and fetch Mathman,” winked Paul and disappeared down the hall.

“You just said you were Mathman?” Max yelled after him. “Now you’re going to fetch him? Which is it?”

Paul burst into the sewing room and quickly donned his secret Mathman costume. He had been working on it for some time, sneaking in late at night to sew old socks and broken calculators onto several pillowcases. With compass-antennae and soft silk wings the costume had a strong insect-vibe going, for whatever reason Paul just could not shake the ‘moth’ imagery when designing Mathman.

“A civilian is in need of assistance,” he announced excitedly to the mirror.

Paul’s son Max was terrifyingly competent for a 14 year old and rarely came to him for advice on anything. Lately Paul had been feeling kind of useless, like he didn’t deserve his World’s Best Dad mug. Heck maybe he didn’t even deserve to be nominated.

“But now he’s wandered into my maths web!” said Paul, pretty confident that moths span webs. “And I shall take him under my wing, and we’ll fly. Fly! Towards the light of knowledge!” Paul spread his math wings wide, knocking over half a pile of towels. “Mathman away–”

A rush of wind accompanied by a bright light blasted through the room, knocking over Paul and the rest of the towels.

Standing in front of Paul, suspended in the air and encased in a ball of crackling energy thrust out of a wormhole was a grizzled man with a robotic arm and a large Victorian top hat.

“I see,” managed Paul. And then in his shock he could think of nothing to say other than: “Are top hats very popular in the future then? Should I buy one?”

The man’s hand went up and touched his hat self-consciously. Paul swore he could hear someone snickering behind the time traveller’s back from inside the wormhole and saw his face go bright red.

“Yes,” the man said. “They are and you should.” Paul heard open laughing behind the man now. “Shut up!” The man called over his shoulder.

“Max?” The years and unimaginable traumas had done terrible things to his son’s face, but by gosh it was him alright…

“Listen I don’t have much time. They’ll find us soon.”

“Who?” gasped Paul. “Who’s after you? Is it the Inland Revenue? Do you need to borrow some money? You need to make sure you’re putting twenty percent of your paycheck in an account you can’t touch–”

“It’s not the Inland Revenue Dad!” Max dropped his voice to an urgent whisper, looking over his shoulder. “Just listen to me, I know this is going to sound crazy…but you can’t help me with my homework tonight.”

“I most certainly can young man!” Paul had never been more offended. “I am very good at maths.”

“You don’t understand Dad. I don’t mean you can’t help me. I mean you mustn’t.” Max tipped his top hat back dramatically. “The fate of the world depends on it.”

“Did your mother put you up to this?” Paul asked, sure that she had. She was always putting people up to things.

“I made a terrible mistake, Dad.” Max admitted. “I created a form of malevolent artificial intelligence that decimated the earth’s population, and now an army of killer robots scours the wasteland picking off any survivors.”

“It’s not my fault, Dylan made me do it!”, whined Future Max.

“So if Dylan jumped off a cliff would you too?”, Paul scolded.

“He did jump off a cliff, to avoid a slow agonising death toiling in the battery mines.”

“Oh dear, poor Dylan.” Paul was not very good at dealing with these sorts of things. “I should get his mother a Body Shop voucher or something.”

“No Dad! He’s not dead yet!” Max was finding the whole ordeal of getting through to his father about as much of a nightmare as he expected. “But he will be if you help me with my maths homework!”

“No not at all. You do an excellent job Paul–”

“That’s Dad to you young man. I didn’t give up the best years of my life raising you to have you call me–”

“–And that’s the problem.” Behind Future Max in the wormhole, the sounds of a desperate battle could now be heard. Time was clearly running out. “You help me with my homework, we bond, it’s awesome. But then I go on to pursue a career in maths.”

“And then I go on to create the AI and everything goes to hell!” Max yelled over the sound of unseen lasers fire.

“Everything is destroyed because of what I did. So you have to stop me. Stop me from enjoying maths. Stop me from even understanding it. It’s the only way. Do you get it? Dad?” Someone was trying to yank Max back into the wormhole now. He struggled away from their grasp, reaching out to grab the sock-proboscis of Paul’s costume. “Do you get it?!”

“Promise me Dad! Promise you won’t help me with my homework!”

“Or everyone you’ve ever known will die!” The wormhole was shrinking now, but horrific screams of metal on flesh could be clearly heard. “You’re the only hope, Dad! The only hope!” The air sucked out of the room as Paul’s son from the future and the horrific robot battle vanished with the sound of an oven door closing.

“I promise Max! I promise!” cried Paul as he fell forward reaching for his son, grabbing nothing but a pile of jeans that no longer fit anyone but were still too good to throw away.

Dazed, Paul shambled back into the dining room, his Mathman costume flopping about on his head. As he walked past his gawking son, Paul’s face contorted into an insane grin that he hoped projected the message ‘Nothing very bad happened just now in the sewing room why would you even bring that up?’

Paul continued into the kitchen and got started on the dishes again.

“Nothing very bad, why would you even bring that up?”

“Uh…” Max gestured to his homework. “Because you said you were going to help me?”

Paul’s smile faltered. “I…I can’t.” He whispered into the dishwater. “I can’t help.”

“Why not? Are quadratic equations too hard for you?”

At this, Paul bit the inside of his cheek so hard he drew blood. But he tried to keep in the front of his mind what had just happened. Paul’s thoughts had an infuriating habit of wandering off when something important was being said, and he wasn’t one hundred percent sure he had taken on board all the things his future-son had said. Something about robots, he was certain. And potentially something about needing to borrow money?

“Yes Max. They are too hard, what with all their simple formulas and whatnot.” Paul scrubbed furiously at an already clean spoon. “I’m sorry. I just don’t know how.” He could almost hear his son’s voice drifting across the gulf of years. You saved us Dad, it seemed to say. If this was being a hero, Paul did not like it one bit.

At the dining table, Max made one last ditch effort to avoid having to do his own homework.

“That’s ok. I’ll just ask Dylan if his dad can help me tomorrow after school. Dylan says he’s a genius at this sort of stuff.”

“What!” Paul slammed his hands down into the sink, getting soapy water all over himself and the cat. “Dylan’s father doesn’t know shit about shit!” Dylan’s father was a huge dummy and all the dad’s knew it. Paul would not be able to show his face at any prize-giving if word got out Dylan’s dad was helping the son of Mathman.

The scummy sink water stilled and Paul’s reflection swam into focus, but it was not Paul that stared back at him. It was a giant moth. Noble. Brave. And very smart.

In that instant Paul made a decision with consequences more far-reaching than most men in their mid-40s made on a Tuesday evening in Christchurch. He grabbed his World’s Best Dad mug from the drying rack, filled it with water and swigged; before turning to his son and spreading his moth wings dramatically.

“Let’s take a look at that homework eh boy?”

You can subscribe to Nic Sampson’s Word Bees short story newsletter here, and you can book tickets to his Comedy Festival show Jewel Heist here.