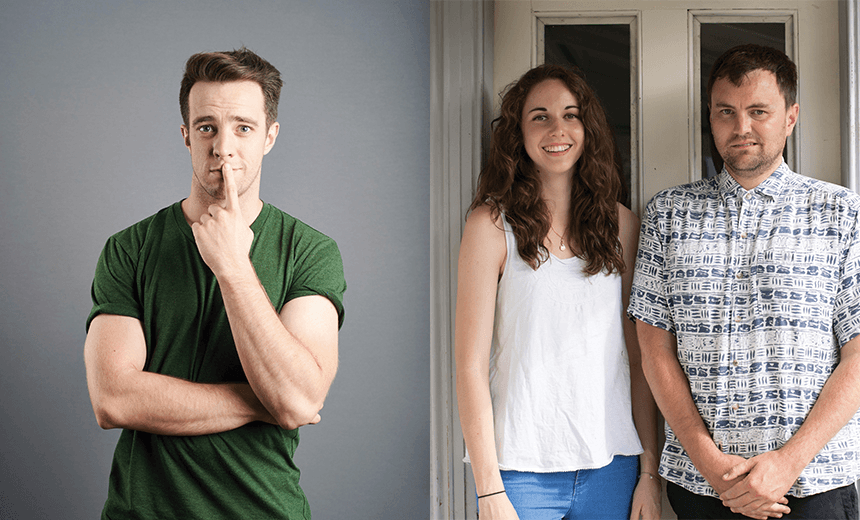 And so it begins: The Basement’s Comedy Fest curtain-raiser, reviewed

Spinoff Comedy co-editor Natasha Hoyland heads to the Basement Preview Show for a first look at the acts performing there over the course of the comedy festival.

The Flick Electric Co. Comedy Gala is happening tonight in Auckland, which means it’s officially time for the NZ International Comedy Festival! To celebrate, I went out to partaaay*, heading to The Basement theatre’s preview showcase of acts that’ll be performing at the venue over the next few weeks. Here are my thoughts!

(*Disclaimer, I was home by 11 and didn’t consume a single alcoholic beverage. Wild, baby, wild.)

The Basement is one of my favourite venues, especially during comedy festival time, so this preview show really got me on a buzz and all geared up for my most likely very regular visits in the weeks to come. The audience all funnelled into the main theatre, taking up every seat. The air was warm and drunk women were taking selfies in the front row – welcome to comedy fest!

There were way too many acts on this line up for me to write about them all, so I’ve picked a few stand out acts. Trust me, if I wrote about all of them you’d get so bored of me gushing about people that you’d throw up. I genuinely enjoyed all the acts, which is not something I can say about any other comedy line up show I’ve ever been to, so that’s a good thing. I laughed and smiled the whole way through this one. These were some of my favourite moments:

Donna Brookbanks opened the show as MC, walking on stage as an alter ego crazy cat lady character with blue hair. I was really into it, but it was really hard to tell if anyone else was. She quickly discarded the character and soon became herself which sounds like some Eleanor Catton written thing, but that is exactly what happened. She hosted as herself the rest of the night and was very good! I loved every second that Donna was on stage, and I’m not sure if it’s her warm bubbly personality and stage presence or if it’s her often self-deprecating yet relatable humour that made me enjoy her performance most.

Eli Matthewson is always a stand out act for me in any line up, and last night was no exception. His set, much like his upcoming show judging by the title, was all about sexual observations, education, and the advice that features in the sealed sections of Cosmo magazines. My favourite joke of the night was about ‘praying the gay away’. This preview show was a bit like a pecha kucha seminar (but a lot less dire) where everyone was pitching their show to audiences members to get them to come along. A lot of them succeeded in this case, and Eli has definitely sold me a ticket.

I didn’t really know what to expect from Inosi Colavanua as I’ve never seen him perform before, but he did come second in the RAW Comedy Quest last year, so I knew he’d be decent. He joked about Tinder and being single – which seemed to be a common theme in this line up. Somebody just date these people! Or don’t, because it’ll probably ruin their careers. Inosi also joked about being lazy, walking his dog whilst in an Uber and how a 101 year old woman winning a 100m race makes him feel like a terrible person. Inosi is quite new to the scene but was one of my favourite acts of the night. He’s definitely one to watch.

Now, Guy Montgomery. I never know what to say, but I still can’t get enough of him. This was a great set for Guy, making observations about the things stupid people on Facebook do, and his hatred of open letters. Guy Montgomery is one of the best storytellers around at the moment, some of these stories being real life anecdotes, and some being quite surreal and absurd where there’s no way of telling what the destination is, but you’re still keen for the ride.

Fuq Boiz were something else. I had no idea what to expect from this unlikely combination of Hamish Parkinson and Ryan Richards, but I really enjoyed it. I can’t really explain what it is they did, but there was a lot of wall kicking, screaming, and cake baking. An audience member was left with a cake at the end. James Roque summed it up best with his response to the audience member offering his act, Frickin Dangerous Bro, some cake when they went on stage “I don’t want any of that, I’m not gonna trust a cake that comes from a group called the Fuq Boiz”

I also thought each of the duo acts that performed separately were real good. In particular, Bridget Davies and Tom Sainsbury each stunned on their own with their real life anecdotes, so when they come together for their show in the festival, I expect that show to be a hit.

* Disclaimer: The author is the producer of the Fuq Boiz and Frickin Dangerous Bro shows.

Click on each of the acts names to buy tickets to their comedy festival seasons or go to comedyfestival.co.nz to view the full line up of acts on at The Basement and other venues across Auckland and Wellington.