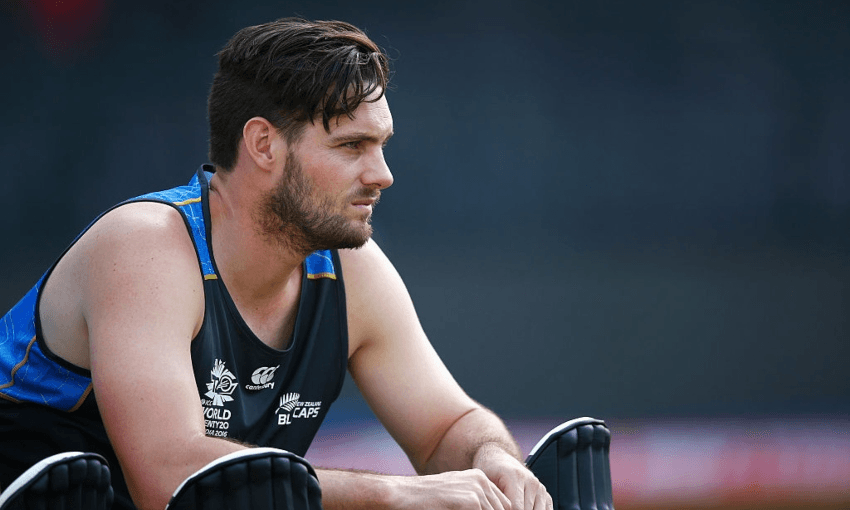 Mitchell McClenaghan dreams of getting back in black

One of the best T20 bowlers in the world is currently without a cricketing gig. What does the future hold for Mitchell McClenaghan?

It’s telling that out of all of the many shirts worn by cricketer Mitchell McClenaghan, his favourite one is still the black shirt of New Zealand. But he’s been forced to watch the Black Caps play in the World Cup in England from the other side of the world; and he has had to find himself a day job.

The fast bowler controversially turned down the offer of an NZ Cricket contract in 2017, to pursue opportunities on the international T20 tournament circuit. It hasn’t been a bad call at all, with McClenaghan recently playing an understated but important role in the Mumbai Indians winning the extremely lucrative and competitive Indian Premier League. In the final he sent down four overs for 24 runs, holding the Chennai Super-Kings underneath the required run rate in an eventual 1 run win.

That was about a month ago. Now he’s coaching people at F-45 gyms around Auckland, without any confirmed contracts to look forward to. He hasn’t got a call up at this stage for the T20 Blast in England, or any of the other various leagues he’s played in around the world. It’s quite a turnaround, from the absurd bling and glitz of the IPL, to getting up at 4.15am in the morning to get to his day job.

“I’m currently unemployed as a cricketer, so I’m shitting bricks,” he told The Offspin podcast. “I’m not feeling confident about any of it, to be fair. What I’ve learned the most over the last couple of years is that it’s a fickle game.”

Listen to Mitchell McClenaghan’s interview with The Offspin. Download this episode (right click and save), listen on the player below, subscribe on iTunes or via Spotify.

He’s seen an increasing trend of statistical analysts taking over the recruitment for T20 franchises, and many of them are looking to make their mark by unearthing the next Wasim Akram or Jofra Archer out of nowhere. “They’re trying to forge a career and looking for the next big thing.” That leaves McClenaghan with far fewer limited opportunities to make teams, despite a proven record in shorter formats. He also appears to be out in the cold for the national team.

“When I made the decision to play Big Bash [in Australia] part of my conversations with High Performance New Zealand was that I’d still be available for all formats,” he said. “And it was almost done in a way with [former coach Mike] Hesson and the high performance guys that they were happy for me to go and do it, and just let them know when I was available. For whatever reason, that didn’t eventuate.” He hasn’t played for New Zealand since, and hasn’t had any conversations with new coach Gary Stead about a return, saying “the communication has been limited.”

It wouldn’t be fair to say he turned his back on New Zealand either, despite the decision to turn down a central contract. Over the last home season, McClenaghan played Super Smash for Auckland, coming 2nd on the overall tournament wickets list, as well as coming 5th on the wickets list in the List A Ford Trophy. He considered himself available for New Zealand for the ODI World Cup, and wants the opportunity to push for a chance in next year’s T20 World Cup too.

“They’ll probably try a lot of younger guys before the World Cup, which is understandable, they want to know what guys can do. And then if they can’t do the job, there’s a reliable elder statesman waiting in the wings I guess,” he said with a laugh.

He believes his game has improved since he last played for New Zealand too. Once his main role was basically to smash out wickets, but the different demands of IPL cricket have forced him to adapt. “When I do get left out, it’s because teams are concerned about economy rates. So this last year I’ve been working really hard on if I’m not taking wickets, then I’ve got options to dry up the runs.

“I’ve always had the attitude that I don’t really care too much about my figures, I’ll go and do whatever job needs to be done for the team at that time,” he added.

Playing overseas with the absolute best of the best in different conditions is a major part of why he believes he’s a better player now than he was then. “I’ve got more skills, I’ve learned so much and I think I’ve still got a lot to offer. It’s just an interesting position because you don’t want to go to a player who does this stuff, but at the same time, I’ve got better. Other guys who are doing it now like Anton Devcich, they’re getting better, they’re learning more.”

However, it could well be that now that he’s left the door open, others have stepped through it. Matt Henry has been impressive at the current World Cup and has been banging down the door for a permanent slot for years. Lockie Ferguson, who quite literally took McClenaghan’s spot on the central contract list, has also become a top performer. Doug Bracewell waits in the wings, and Hamish Bennett has just come off a dream season with the ball.

It leaves McClenaghan probably requiring an injury crisis to get the call up again. He’s philosophical about his chances.

“I don’t think it’s going to happen any time soon, which is disappointing. But I’m happy to be the person who’s forging that pathway for guys to go and get different experiences and different conditions, and become better players, and then come back and apply their services for New Zealand when it’s required.”

Listen to Mitchell McClenaghan on The Offspin, The Spinoff’s World Cup podcast. Download this episode (right click and save), subscribe on iTunes or other podcast services, or listen via Spotify.

This content was created in paid partnership with Coffee Supreme. Learn more about our partnerships here.