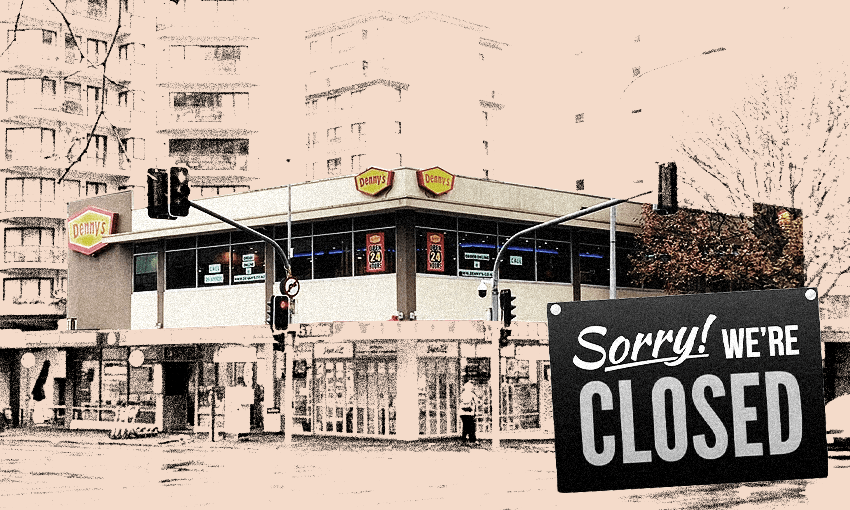 Picture this: You’re out late on a Saturday night in Auckland’s thriving (tbc) CBD. You’ve been boogying along the viaduct, hobnobbing on Karangahape Road, or maybe somewhere cooler betwixt the two. You really want a bite to eat, but you’re not in the mood for queueing at McDonald’s or Kebabs on Queen. You want pancakes at 3am, you want to sit down, you maybe even want a Coke float. So you go to the CBD stalwart: Denny’s.

And for the first time in your memory, it’s closed. There’s a sign on the door that says “Denny’s Auckland CBD Restaurant will now be operating from 7am to 11pm due to current staffing shortages. This stores [sic] will no longer be operating 24/7 ‘til further notice. You can still get your Denny’s fix and all your favourites with our new revised hours.”

That’s right. The one constant of the ever-shifting CBD, the bastion light in a foggy darkness, is no longer open 24 hours a day. And it hasn’t been for quite a while.

On February 27, Denny’s posted an identical message to their Facebook page, informing “friends and family” that the Auckland CBD and the Manukau restaurants would only be operating from 7am-11pm due to staffing shortages, a familiar hospitality phrase in the Covid era. Denny’s Christchurch suffered the same fate early in April. For a while there were no Denny’s open 24 hours in the whole country. New Lynn? Nope. Porirua? Don’t even think about it.

Almost a year ago, I tried to spend a full 24 hours in the Auckland CBD Denny’s, only to be thwarted at the nine hour mark. But even in that time it was clear to me that Denny’s was mostly empty during the day, which makes the decision to close at 11pm especially bewildering.

I’ve observed, outside of this failed stunt, the restaurant full of people – theatre kids after a closing night, high schoolers after the ball, students out late on a Wednesday night, adults who should know better – entirely in the hours where the pm clicks over to the am. It comes alive in these hours, and proves its worth.

Denny’s is an institution. It’s a tier above McDonald’s, where service has been reduced to ordering from a screen. It’s the only place where you could have something close to a restaurant experience at any hour of the day. It’s also the only place where it’s socially acceptable for messy children and messy adults to dine next to each other, everybody united by the social contract that it is slightly embarrassing to be at Denny’s.

An anonymous staffer at The Spinoff called the food “underrated”, whereas I would call it “correctly rated”. It’s unlikely to be the best meal you’ve had but it’s also unlikely to cause any lasting physical damage, which is the best you can hope for from somewhere that’s open 24 hours a day. When you truncate those hours to a mere 16, it’s just another restaurant with OK food.

Staffing issues are rife throughout the country and in all sectors, so I’m glad Denny’s workers aren’t being made to work overnight shifts while short-staffed. But if a Denny’s isn’t open 24 hours a day, it’s not really a Denny’s, as far as I’m concerned. It’s a Denno’s.

There is a silver lining to this tragic tale. As of writing, one Denny’s in the country is still open 24 hours a day. After announcing its own shortened hours, the Manukau Denny’s went back to its classic opening hours on April 11. So if you want your Coke float fix, you better get on your preferred form of transport and get out to South Auckland. Otherwise, you’re out of luck between the hours of 11pm and 7am.