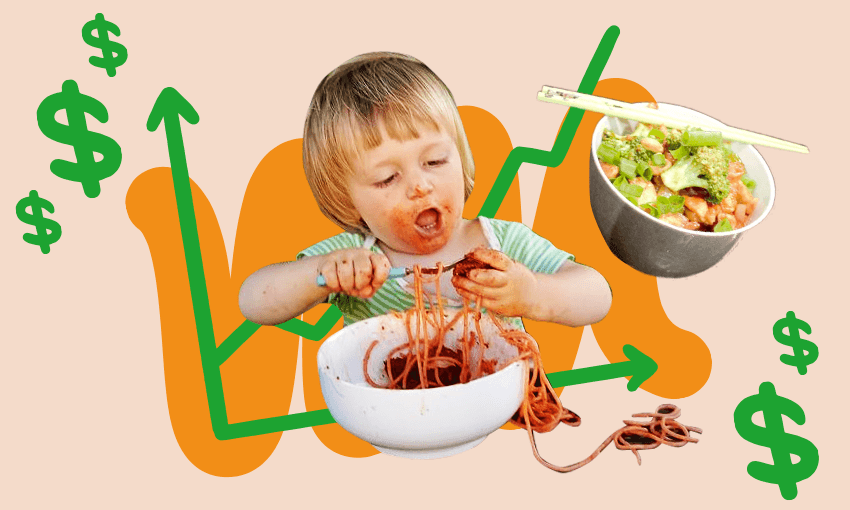 As food prices soar, how are Aucklanders adapting in the kitchen?

By Tulia Thompson
Guest writer
Made possible by

Faced with the highest annual increase in food prices in a decade, many New Zealanders are rethinking the way they feed themselves and their families.

We sit outside to eat it on the small verandah of the apartment she shares with her husband and 10-year-old son, and their fluffy but temperamental chinchilla, in the central Auckland suburb of Freemans Bay.

The dal – a recipe she learned from “an aunty” who was part of her parents’ expat Auckland community – costs just $9.17 to make, with most of the cost coming from the bag of fresh spinach.

For Mok, who works as a data and insights lead for Auckland City Council, the traditional cuisines her family loves are still cost-effective.

But many New Zealanders are struggling with burgeoning food costs – in January, Stats NZ reported the highest annual increase in food prices (5.9%) in a decade, after the 6.6% rise to January 2011 – are rethinking the way they’re feeding themselves and their families.

Many recipes that make regular appearances in Mok’s home are easy on the budget, using staples such as red lentils, mince, rice and tinned fish that feature in multiple meals. Her husband cooks Indian Muslim food from his own culture. Mok cooks a range of dishes from southern India, Malaysia (both Malay and Malaysian Chinese) and mainland China.

But recent price rises mean Mok has moved away from buying her preferred brand of cheese. “It’s New Zealand – why is cheese so expensive?”

Like a lot of people, a lack of time means she often shops at her expensive local supermarket. “It’s very tragic – because it’s close.”

Across town in Blockhouse Bay, Caroline Scott Fanamanu-Matamua, co-owner and carver at Vava’u Carving House, is weighing a similar dilemma – to spend more on petrol to go to a cheaper supermarket further away, or buy locally?

“I could go up the road, which takes two minutes and costs $1 extra, or spend $5 in petrol to get something cheaper at Pak ‘n Save.”

She leads a busy life, coaching a women’s rugby team while raising the three of her five children who are still living at home – boys aged eight, 14 and 17 – and says at times she’s too busy to cook dinner after she’s driven them to after-school sports.

“Sometimes you just can’t physically do it.”

Fanamanu-Matamua is grateful that her children love easy, quick food. “They don’t have any high expectations,” she says, partly because they grew up as “sideline babies”. Two or three times a week Fanamanu-Matamua cooks a lasagna, using spiral pasta, ready-made pasta sauce and cheese. It costs $25 to feed the family of six, including the three boys, her partner and another relative who lives with them. Fanamanu-Matamua says her teenagers eat as much as adults.

She has been finding recently that cheaper stock is missing from supermarket shelves, so she’s forced to buy more expensive brands.

Fanamanu-Matamua has responded to high food prices by shopping around and choosing cheaper cuts of meat. Even mince was recently up $15 per kilo, but she nabbed a Pak ‘n Save special for $10.

One regular meal is kia’isipi, lamb’s neck. She boils kia’isipi with potatoes or rice and it makes enough leftovers for sandwiches.

“Money basically gets sucked up by rent, groceries and electricity and that’s pretty much it.”

For Rajneel Singh, a freelancer in the film and television industry who lives with four flatmates in Mt Roskill, high prices and irregular work means he can’t afford to cook delicious food to share with friends.

When Singh had more money, he would cook steak, roast chicken or salmon and veges. But when times are tough, he will swap beef for chicken and eat more potatoes, noodles and rice. He’ll travel further to go to a butcher offering specials. In the last couple of years of Covid lockdowns, there were weeks when he couldn’t afford meat at all. Instead, he would make vegetable stir-fries and curries, and “fill up on potatoes”.

He cooks a Chinese-style stir-fry every week, starting with fried ginger and onion and garlic, using either chicken or beef for protein, and adding green beans or broccoli and capsicum. He makes his own Cantonese-style sauce and eats it with either egg noodles or steamed rice. It’ll cost him about $11 or $12.

In the last six months, increases in the price of meat means he uses smaller portions in each meal. “I’ll buy the same amount of meat but I can’t use it up in just one or two meals. I have to make it last four to get the same value out of it.”

He can’t cook in bulk because he has only a small freezer. “The narratives around how people could be smarter with food are always built around assumptions that they have family-size kitchens and family-size fridges,” he says.

In adjacent Mt Albert, maritime lawyer Colin Hunter is an experienced and talented cook – he learned a decade ago to impress his new wife, a keen foodie – but his options are often limited by the tastes of their two preschool children, who prefer pastas, braised chicken or hamburgers.

Cacio e pepe, an Italian pasta dish he cooks regularly, is “like carbonara without the agony”. It’s simple and costs just $4 to make, he says, relying on the magic of emulsifying butter and cheese and starchy pasta water into a creamy sauce.

Hunter largely shops at Pak ‘n Save because it’s close and pretty good. He doesn’t buy veges at the supermarket, because he finds them expensive and low quality.  Instead, he frequents the vegetable market on Margan Ave in New Lynn, getting fish from the fishmonger’s next door, on the way to visiting his folks in Titirangi.

Hunter is sceptical about how much prices have changed in the last three to six months. For him the significant change has been before and after these two years of lockdowns. “Compared to our pre-pandemic food bills, our weekly food bill is up 50-60% easily.”

He says it’s possible he hasn’t noticed the most recent price creeps. “Maybe I’m just getting used to it.”

Nonetheless, the increases have changed how their family shops and eats. “I had a fantastic local butcher that I love, and I had a long relationship with them. But they’re just more expensive. I definitely cook less meat and more pasta now.”

Expensive cheese has been one casualty. “The chance that I might go out and get a really nice cheese from a specialty store, we would do that far less. Just because you spend so much at the supermarket.”

For Mok, being an apartment dweller means her food shopping is also curtailed by her lack of adequate pantry space and storage. If she had more, she says, she would shop more regularly at her favourite bulk shop Bulk Food Savings in Mt Eden, run by a New Zealand Gujarati family. “It has a huge organic selection and Middle Eastern ingredients that are hard to find elsewhere.”

Spices on the supermarket shelf seem limited and low quality, she says. “It seems ridiculously expensive for a tiny amount.” Instead, she shops for spices at A1 Spice Market on Hobson St, and for dry goods at Asian supermarkets Soung Yueen and Lim Chhour.

For Singh, the high cost of food at the supermarket makes takeaways tempting.

Sometimes, he says, he looks at his shopping list and thinks, “Shit, if I spent two more bucks I could go get KFC.”