Word has spread quickly among Aucklanders about branches of the much-loved Japanese convenience store chain Lawson popping up around the city. But why are so many visitors walking out feeling so disappointed?

It’s near impossible to overstate the importance of the convenience store, or konbini, in Japan. Whether it’s FamilyMart, 7-Eleven or Lawson, konbini are one-stop shops that you’re never too far from. Known for their affordable and delicious food selections, indoor seating, cooking facilities and other services available 24/7, their literal convenience is a product of Japanese society and culture – ubiquitous in everyday life for locals and tourists alike.

For travellers, they leave a lasting impression. It’s hard to comprehend the logistics that allow for this eternally available, fresh and tasty food.

Though originally a brand from Ohio, Lawson is now most closely associated with Japan – where there are 13,992 stores. And it has a particular kind of fanfare around it. The Spinoff’s Sam Brooks says, “Lawson is so huge in Japan that in video games you can dress your characters up in Lawson colours.”

Anthony Bourdain was a fan of the Lawson egg salad sandwich, describing it in true Bourdain fashion as “unnatural, inexplicable deliciousness”. Items like the premium roll cake, onigiri and fried chicken have achieved cult status.

So, when Lawson shops started popping up around Auckland, it’s no surprise that those familiar with the Japanese stores were excited. Word spread quickly among those with a passion for konbini culture.

However, many left disappointed, finding the experience far removed from their treasured memories of the Japanese branches.

Creative freelancer Nahyeon Lee fondly remembers visits to konbini on a holiday to Japan. Drawn in by the familiar name, wild west-type font and blue-and-red colour scheme, she visited the Victoria Street Lawson store in downtown Auckland soon after it opened, with plenty of anticipation.

That visit to the Auckland outlet was “hugely disappointing” though.

“Superficially it looked really similar, inside it just wasn’t good,” she says, reflecting on the disappointing bread twist she tried and a sad-looking burger she spotted on the counter. She remembers being surprised by the cabinet of bongs in the store. “In Japan that would be transgressive, here it’s just confusing.” 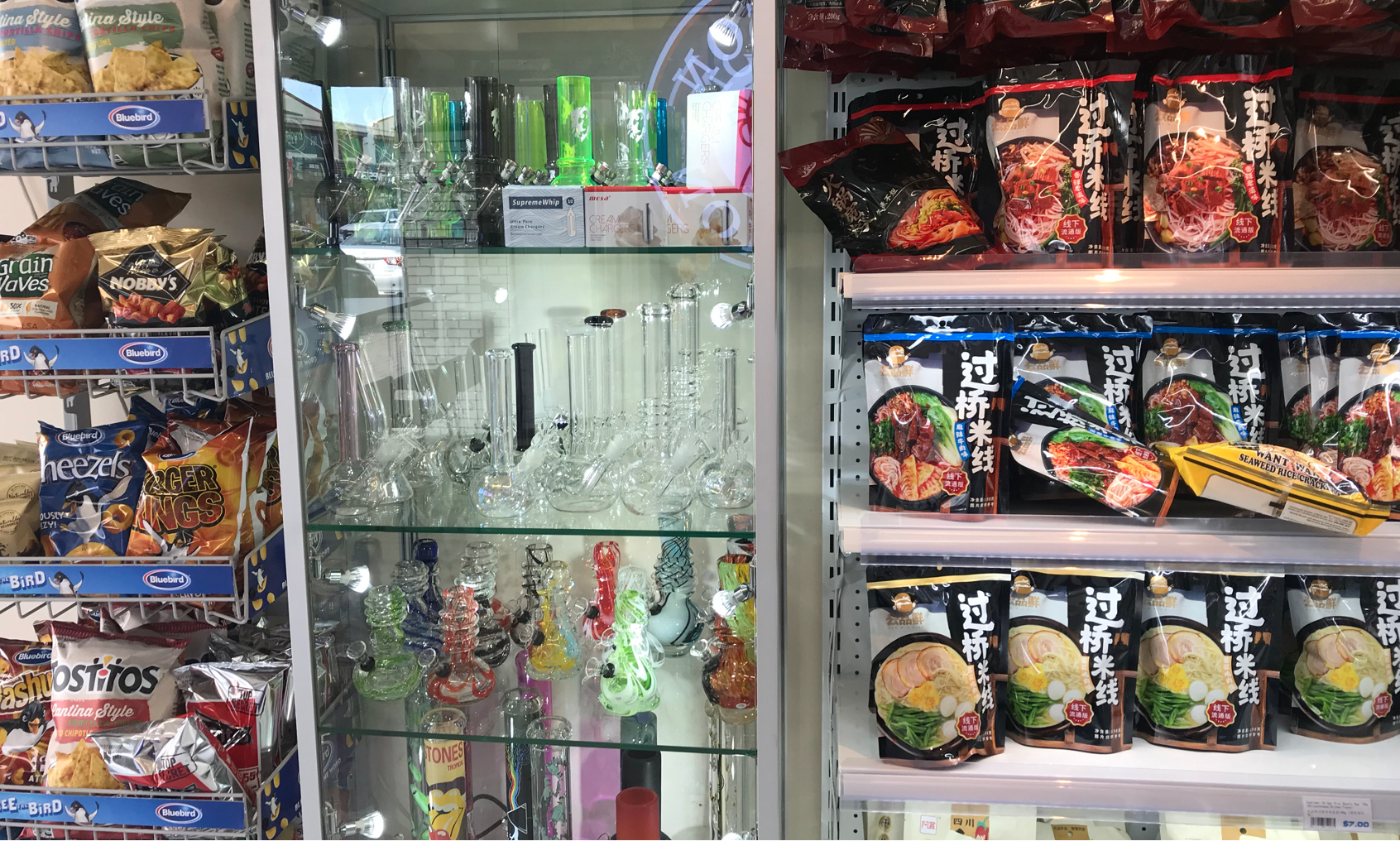 While the branding at the four Auckland Lawson stores clearly attempts to mimic that of the overseas brand, on closer inspection there are some distinct differences between the stores overseas and those here.

The New Zealand companies register lists Lawson Convenience Store as being registered to Welcia Corporation Limited on November 19, 2019. The registered office is listed at Suite 2, 652 Great South Road, Manukau, far from the Tokyo headquarters of the original company.

A quick scan of Lawson’s official Japanese website shows a list of countries and regions with Lawson stores; Japan, China, Indonesia, Hawaii, Thailand and the Philippines. There’s no mention of a New Zealand outlet.

Knowing now that these local iterations are ersatz versions of what she fondly remembered from her trip, Lee feels the company is “preying on memories”.

Consumer NZ CEO Jon Duffy believes this type of imitation could be detrimental at a competitive business level to other retailers, and to consumers who are enticed into the store by the reputation of the highly regarded Japanese brand.

“There is concern if consumers are visiting the shop assuming it’s one thing but it’s actually another,” he says.

To Duffy, there’s a good argument that these Lawson stores are misleading consumers by being an imposter brand. 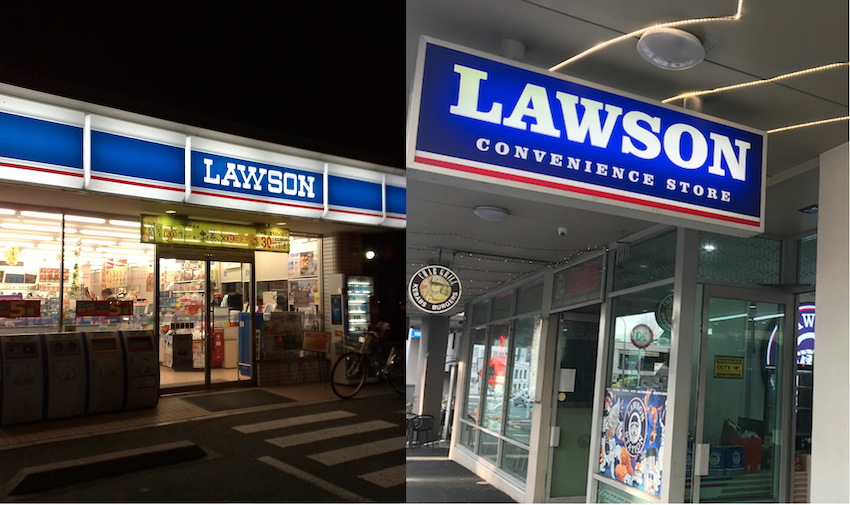 Alex Simms, associate professor in the department of commercial law at the University of Auckland Business School, describes the local stores as “a blatant rip-off”.

She’s not the only one who thinks so. On Google reviews, one customer of the Victoria Street outlet claims to have contacted Lawson in Japan who “mentioned their intention of further legal action”.

Simms explains that while the Japanese-based Lawson company isn’t registered in New Zealand, it still has legal standing if it can prove people were misled into assuming an association between the two, as it potentially infringes the Fair Trade Act. “You can’t stop someone else from using the colour blue, but there’s no way this is coincidental, this is cut and dry,” she says.

A local brand copying such a large overseas corporate is a high-risk strategy, and it wouldn’t be the first copycat convenience store to end up in the courts. In 2016, 7-eleven sued knock-off versions of the store that had opened in Brooklyn, New York.

In New Zealand, Simms says it’s possible the Commerce Commission could bring an action, but it’s unlikely it would.

If the original Lawson company doesn’t take action quickly enough, Simms believes it could potentially lose protection – similar to what happened in Australia with Burger King and Hungry Jacks. A Lawson Convenience Store trademark has already been registered by the counterfeit brand in New Zealand, and another for Lawson Station (another direct copy of the Japanese brand) is currently pending. Graphic designer Lindsay Yee is a fan of convenience stores in Japan, and has visited three of the Auckland Lawson stores so far; Chancery, Dominion Road and Victoria Street.

“Initially you think it will be like the Japanese experience, but it’s definitely not the same,” he says. The Auckland Lawson stores instead remind him of the convenience stores he visited in China, Hong Kong and Taiwan.

While Yee would have preferred the local company had created its own brand rather than imitating the famous Japanese company, he appreciates having the option to eat and sit down somewhere 24/7. “I’m still excited for it to be a thing.”

As for The Spinoff’s Sam Brooks, he had found comfort in Lawson convenience stores in Japan so was “delighted” when the Victoria Street outlet opened. “It looked and felt just like a Lawson’s,” he says.

He had no inkling it wasn’t the real thing until someone told him. “It didn’t occur to me that someone would try to knock off such a recognisable brand,” he says.

“On the surface, it all looks the same, but when you go there in the harsh light of day, it’s like a bad cover of a song you really love. The bones might be there, but none of the notes are right.”