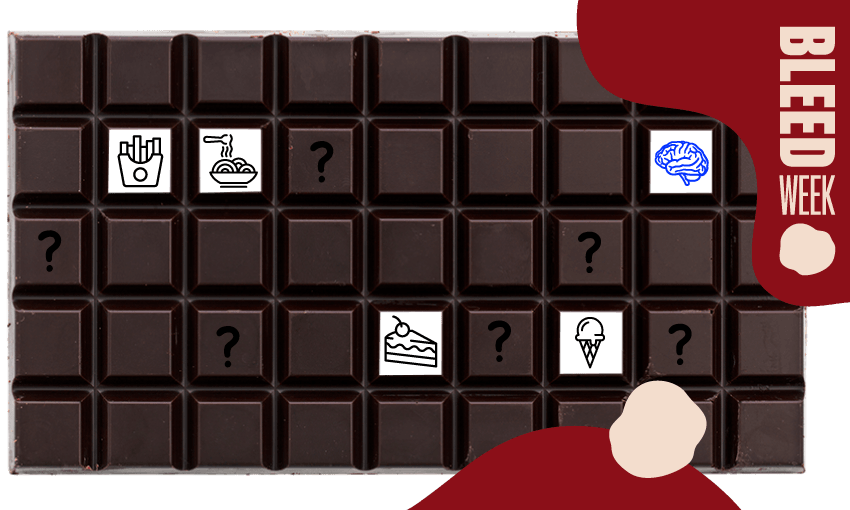 Do our period cravings have a scientific basis, or is it all just marketing by Big Chocolate? Charlotte Muru-Lanning asks the experts.

When I reflect upon the long, unravelling list of foods I eat in the week before my period, it calls to mind the Very Hungry Caterpillar: one bag of chips, half a block of chocolate, one styrofoam container of char kway teow, one mince and cheese pie, two croissants. Not usually an ice cream enthusiast, my mind drifts to whipped cream-capped sundaes.

There are a raft of symptoms associated with PMS: irritability, insomnia, sore boobs, mood swings, hot flashes, fatigue, cramps. But probably the most prominent image of the premenstrual phase involves eating.

Whether it’s sobbing into tubs of ice cream or gobbling individually foil-wrapped chocolates, the belief that our cravings skyrocket around our periods is pervasive. So much so that various food brands have tapped into the link between periods and foods, including “Pause Your PMS” and “Moody Girl” chocolate blocks and “Don’t Come Near Me” and “Don’t PMS” ice cream flavours.

While these cliches are tinged with a somewhat reductive attitude toward menstruation, many of us do notice that our appetites seem to change around our menstrual cycle. But do our cravings really surge right before our periods? And if so, why?

“It’s very real,” says Auckland University of Technology professor of nutrition Elaine Rush. While this can be a challenging area to study because of the scores of variables at play, she explains that “a lot of research has been undertaken about metabolism, appetite and food cravings during the menstrual cycle”.

The physiological reasons for those cravings are complex, says Rush, which stems from the fact that “there’s a soup of different factors and hormones, things going up and down and changing.”

Before our periods start there tends to be a simultaneous drop in progesterone and a rise in oestrogen which can cause blood sugar levels to drop, explains Rush. When those blood sugar levels drop, our brains send signals that we need sugar and carbohydrates to restore balance.

It’s also common for serotonin, the chemical that controls moods, to drop before menstruation. That triggers cravings for starchy and sweet foods which help your body to release the “feel good” chemical. There’s also evidence that we burn more fat in the second half of the cycle before menstruation, so at that time “you might also be craving the energy rush of carbohydrates”, Rush says. In some cases, a craving might also mean there’s a shortage of something in your diet.

“Food cravings depend on your previous experience,” explains Rush. “What you regard as a comfort food, what you’d like to taste or what you like the smell of can change with the menstrual cycle.” When you take time to think about what you reach for at different times of your cycle, you’re learning about your body, she adds.

Emotionally, these kinds of cravings can be both liberating and distressing, explains Samantha Ryan, a health psychology researcher from Western Sydney University who has studied premenstrual changes, including cravings in women who felt negatively about their premenstrual bodies. “Within western culture, women are expected to control and resist their appetites, in order to achieve that idealised western feminine body,” she says.

“The premenstrual body is culturally constructed as being outside of the idealised feminine body, which is the thin, toned, controlled, healthy, very consistent body that does not fluctuate,” she adds. And so along with the myriad painful physical and mental experiences that menstruation can bring on, cravings sometimes only add to discomfort through the guilt associated with eating certain types of foods.

Ryan explains that cliched images of insatiable premenstrual appetites are intimately bound to the stereotypical associations between menstruation and hysteria and lack of control. “Eating appears to come into that for some women, because what can we associate with being out of control and undisciplined? It’s your eating behaviour,” she says.

Weirdly, the way that we’ve absorbed these depictions can also offer a liberating, if short-lived, break from these societal expectations of controlled eating. Ryan explains that the premenstrual self is often positioned as “separate” from the usual self, a permission slip of sorts to allow “those behaviours that they would normally position as immoral and bad.”

In other cases, the physical and mental discomfort around menstruation brought about justification to eat what they felt like. “It was positioned as kind of like a self-care thing.”

Popular culture has also helped create ties between certain foods and mental distress, and consequently menstrual cravings. Moments like Rory eating a ginormous tub of ice cream on Gilmore Girls, Bridget Jones eating a slightly smaller tub of ice cream swaddled in a duvet or Elle Woods eating a whole tray of chocolates in Legally Blonde – or more menstrually specific, the cupcake scene in No Strings Attached – are reified every time we take a spoon to ice cream or reach for the chocs before our periods. A 2017 peer-reviewed article from science journal PLOS found evidence that the types of menstrual cravings we have are informed by the culture around us. “These results suggest that exposure to US culture increases the likelihood that menstruation is identified as a perceived trigger or cause of chocolate cravings,” the study said.

Ryan theorises that foods like chocolate and ice cream have such strong associations with premenstrual cravings because they’re “feminised foods”. At the same time, “they’re also positioned as the food that women are meant to resist”. Multiple studies have suggested that the food we resist is often the food we crave. “It’s not the whole story, but I think that women are really trying hard to avoid these foods could be part of it,” she says.

Some segments of society are slowly adapting to the differing needs of people who menstruate. We see it in the small but growing list of companies offering menstrual leave, schools offering free tampons and pads to students or sports training tailored to athletes’ cycles. Still, there’s little widespread accounting for the associated monthly (or thereabouts) fatigue, brain fog and emotional and physical pain that around half of us will experience for a good chunk of our lives.

Within this context, finding enjoyment in menstrual cravings offers an imperfect way to look after ourselves in a society that for the most part, doesn’t seem to care. “We can take back a little bit of our agency over our own lives and our own bodies and our reproductive cycles,” Ryan says. “So yeah, eat the chocolate bar.”