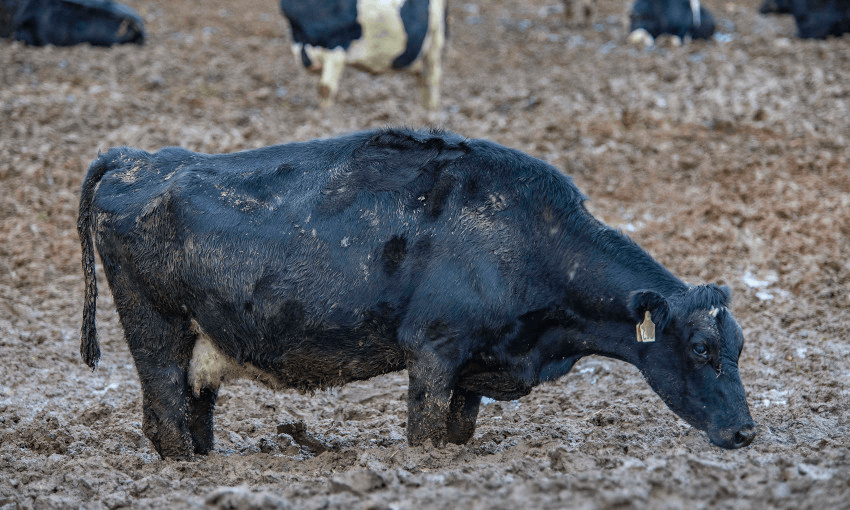 The government has promised to take action on intensive agriculture, with funding approved to set up a group that will “assist and at times embarrass” regional councils failing to enforce the Resource Management Act, David Parker told RNZ today.

After a week of intense scrutiny of the Five Star Beef feedlot and similar operations around the country, Fish and Game last night released footage of cows udder-deep in mud, struggling to walk around a saturated South Island farm. A recent rise in intensive winter grazing has been met with increasing damage to waterways and animal welfare, the group said.

Parker, the minister for the environment, said the government acknowledged the practice can have severe effects in some cases, as effluent and nutrient runoff is near impossible to manage without grass and other natural impediments.

“There’s no grass to take it up, and so when you have a rain event, unless you’re collecting it all, there’s only two places runoff can go: into the aquifer below the land, or across the land into adjacent waterways. Neither of those are good.”

“Fish and Game has been watching this practice and what we have seen is deeply disturbing. You can see animals knee deep in mud and dirty water, with sediment washing unchecked into nearby waterways,” he said. “This mud washes into drains, streams and rivers, choking the environment and smothering insect and plant life.”

“Yeah, I would be embarrassed if that was on my farm,” he said. “To be honest, a lot of it, I believe, is an education thing – farmers have traditionally done things a certain way.”

New Zealand Veterinary Association chief veterinary officer Helen Beattie said cows in these conditions are at increased risk of lameness and mastitis, and are unable to exhibit natural behaviour like lying down to chew cud – a crucial part of rumination.

“Unsightly plumes of discoloured water can be seen billowing downstream from winter feeding sites, yet the councils responsible for monitoring seem to be turning a blind eye to the damage being caused,” Taylor said.

“Some councils like Southland are using their so-called environmental plans to make it even easier for farmers to use this destructive practice.”

And David Parker told RNZ it’s “not fair” for regional councils to pass the issue on to central government, as they have authority to control the practice under the RMA.

“Regional councils of course have had full authority since the RMA was passed decades ago to control these practices, but sadly some haven’t done it properly. The rule of law needs to be enforced. One of the reasons we’ve set up this enforcement unit in central government is to make sure that’s the case.”

Revelations around the environment and animal welfare this week promise continued scrutiny on Kiwi farmers amid a global trend towards environmentalism and ethical meat. And, if rumours from environmentalists are true, beef is just the beginning.