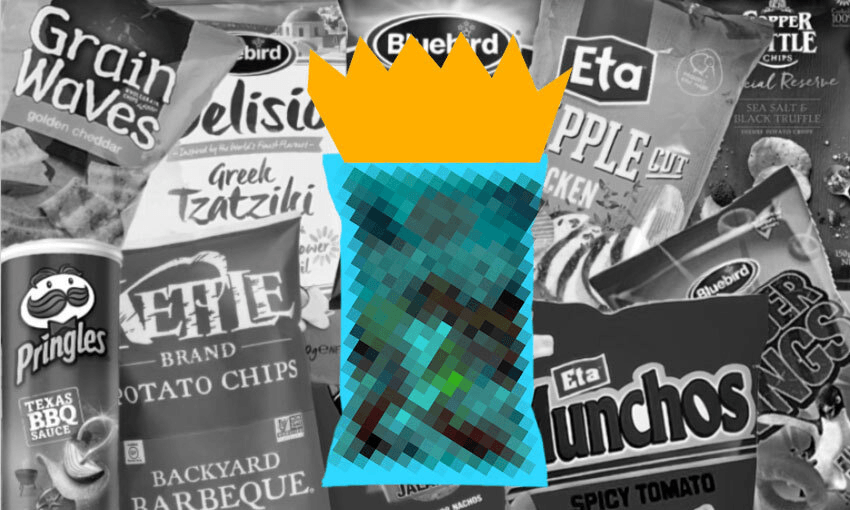 If you already guessed it, congrats? (Image: Tina Tiller)

If you already guessed it, congrats? (Image: Tina Tiller)

Never return to the scene of the crime. Everybody knows that. But when everybody’s stuck at home and I have only my own thoughts to keep me company, they begin to wander to my greatest sins. And at the top of that list, even ahead of [redacted], is my chip ranking. I didn’t kill anyone, I didn’t physically hurt anyone, I didn’t steal anything (except a lot of people’s time, apparently) and yet the guilt lingers. So here I am, more than two years on, righting my wrong.

Back then (a lifetime ago!) I said that Bluebird Salt and Vinegar chips were the best in New Zealand. And thousands of you said ‘get fucked’. And you know what? You were right. Because it was the choice of a coward. Someone who wasn’t ready to put her actual favourite chip (Delisio Sweet Chilli Relish) at number one out of fear. Someone who thought just don’t make them angry while knowing full well that making decisions out of fear is a fool’s game. I was a fool. For nearly two years I walked the supermarket chip aisle with the weight of a nation’s anger on my shoulders. With every purchase of Proper Crisps Cider Vinegar & Sea Salt, I wondered is this, in fact, the best chip in New Zealand? Every flavour was reassessed in a new light and although I knew Bluebird Salt and Vinegar felt wrong, no other chip felt right.

People of New Zealand, it is with great pleasure and absolutely no fear or shame that I declare the new best chip in New Zealand:

I’ll admit I walked straight past these chips for months (the Snackachangi ranged launched in June 2020) on my way to the Delisio section because the branding made it look like yet another ill-fated novelty range. Yes the name sucks and yes I detest saying it out loud. Snackachangi (hate it) is the unfortunately named spinoff chip range from Leigh Hart’s even more unfortunately named Wakachangi beer (gross). The name is terrible, the beer name is worse (though the beer is also surprisingly tasty), the packaging is hectic and not great, but the chips are something else.

How to describe this chip? It’s perfect, that’s it. I want to submit an OIA request to find out how, among all the bougie chip brands and stalwart chip brands, did Leigh Hart (Leigh Hart! From the sausage ads!) create the perfect chip.

First, the consistency. Sitting somewhere between a standard potato chip and a thick cut, Snackachangi has managed to find the ideal chip thickness. It’s sturdy enough to hold a lot of dip, but not too thick that it feels like a corn chip. And while chips like Proper and Kettles have an admirable density, Snackachangi is a rippled chip. A traditional crinkle, something I never thought I’d appreciate until I realised no new chip brands have crinkles. As with people, wrinkles in a chip give it personality and suggest a life well-lived. Snackachangi perfectly straddles the worlds of traditional, kinda budget potato chips (ETA, Bluebird classics) and new-age fancy-pants chips (Proper, Copper Kettle).

Secondly, the flavour. Snackachangi comes in five flavours. The BBQ flavour is decent, as is the vinegar and salt. But the star of the pack, in a world of its own, is Sour Cream Chive & Onion, or ‘Chonion’, as it’s known in my flat. I never thought I’d so love a flavour that wasn’t a staple (salted, chicken etc) but there’s something about this very specific flavour that makes it feel universal. The distribution isn’t too heavy so you’re not left with powdery fingers, but it’s strong enough that you know immediately what you’re dealing with.

It dips incredibly well (that aforementioned thiccness), and unlike other very specific chip flavours, Chonion chips can be eaten ad nauseam (did I use that term correctly? I doubt it). Any time a flatmate goes to the supermarket, it’s expected that they’ll return with two packets of flat chips: one Chonion and one “other”. In however many months Chonion chips have been available, no other flavour has been promoted to the main slot. And that, my friends, is a meritocracy in action.

Since starting this article I have learned that Griffin’s are the manufacturers of this chip and now I don’t know what to think. Griffin’s own chip brands are ETA and Kettle Chip Company, so I’d suggest they ditch those and go all in on Hart’s Snackachangi range. When you’re making the best product, why make a bunch of mediocre ones as well? Again, this thinking is why I’ll never be rich. But I don’t even care because you don’t have to be rich to buy a packet of Chonion chips. In fact, for only a few coins, you too can experience a perfect potato chip.

I don’t know how you did it, Leigh Hart, but your clever marketing skills have produced a genuinely astounding product that deserves to be eaten by every New Zealander before their silly little lockdown walk.

Snackachangi Sour Cream Chive and Onion chips are the best in New Zealand.