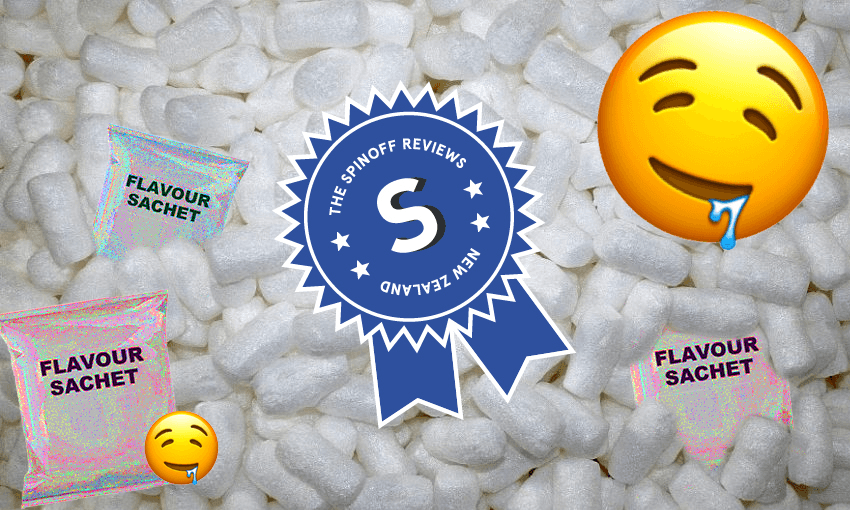 We review the entire country and culture of New Zealand, one thing at a time. Today, Josie Adams eats packing peanuts.

To avoid a lawsuit, let me first state that Pop Starch packing peanuts do not call themselves edible. The word “edible” is nowhere on the product. In fact, the product description says “not meant for human consumption”. To my mind, “not meant for” has a very different meaning from “not suitable for”. Just as Sir Ed changed people’s minds about Mt Everest being “unclimbable”, I am determined to change the way the nation sees biodegradable loose fill.

I came across these starchy pods when the Spinoff office received a PR package. It wasn’t meant for me, but the rustling of packing peanuts sang out across the room like pulpy sirens. “What do we do with them?!” wailed Alex Casey, waving the unsolicited nugs around, afraid for the environment. “Don’t worry,” said young, sharp-eyed Alice Webb-Liddall, “those are not normal packing peanuts. They are made of corn starch.”

In a fit of relief and enthusiasm, I immediately ate one. Thankfully, Alice was right, or I would have just consumed styrofoam.

The packing wrapped around my teeth like a needy lover. All my life, I’ve swerved vices. I smoked, I drank, I accidentally listened to an entire Jack Johnson album, but I never felt the jaws of addiction nipping at my sinful neck until I ate this packing peanut. I ordered a 10L bag online immediately.

My sweet packing flesh arrived at the office the next day, which is not quite as good as Uber Eats but much better than Countdown home delivery. As soon as I drew the starchy white bounty from its box, the Spinoff staff descended like vultures.

Ads guy Matt McAuley shared my thrall for the ball, and popped several into his salivating mouth one after the other. “I wouldn’t call them moreish,” he commented between nuts, “but I will eat more.”

Packing peanut expert Alice kept a bowl next to her desk, saying they were “very good with salt”.

Everyone else refused to eat one, screeching closed-minded screeds like “absolutely not” and “no way, you’re all fucked”.

I was determined to change their minds. All this pseudo-styrofoam needed was a little flavour.

Sauces were out of the question. The packaging clearly states to avoid liquids and condensation – barring my stomach acid, obviously. I tried a peri-peri drizzle, but it dissolved the chunks as soon as it touched them, leaving me with a cold and fibrous soup. I’ve never been a fan of minestrone. Instead, I scoured the office kitchen for dry flavouring.

I haven’t eaten raw mie goreng flavouring since there was a power cut in my Dunedin flat. It’s even more powerful than I remember. Because the nugs taste like nothing (with a hint of maybe corn air) they don’t mask the powdered concentrate of garlic and soy like raw ramen does. I am eating straight flavour and my breath has never been more offensive. Two co-workers partake. They nod, grimace, and eat no more.

These pumice-esque babies may look porous, but they’re not! The flavour slides around them and into the bottom of the bowl. You have to crush them into wrinkled, Pez-reminiscent tabs before their surfaces will offer purchase to a simple dusting of vanilla icing sugar. Tastes good, though.

I don’t know why I thought this would ever taste good on something that isn’t a potato wedge.

Flavour 4: dissolved in a glass of water

I was going for a Metamucil vibe here, but really missed the mark. I read the fine print on the bag a little more closely while giving the nuts a stir. “Almost completely dissolves in water. What remains quickly biodegrades.” I looked at the wee clumps of fibre floating in my glass and began to doubt that “biodegradable” and “acceptable for human consumption” were synonyms.

It didn’t stop me eating them. I was hooked on the way they swaddled my mouth like shy peanut butter. I ate them with salt and said, “yes, not bad”, even though they are objectively bad. I didn’t want to give up on them. I ate so many, straight from the bag, and was still hungry. How many calories are in a packing peanut? Not enough.

I felt lethargic and, honestly, really sad. I felt so sad. It could have been a chemical upset from eating a product “not meant for consumption”, or it could have just been hunger. Alice got a headache. I’m not blaming the packing peanuts for this, but anything’s possible.

Good or bad? Good for the environment, bad for human consumption.

Verdict? Eating these should be a hobby, not a lifestyle.