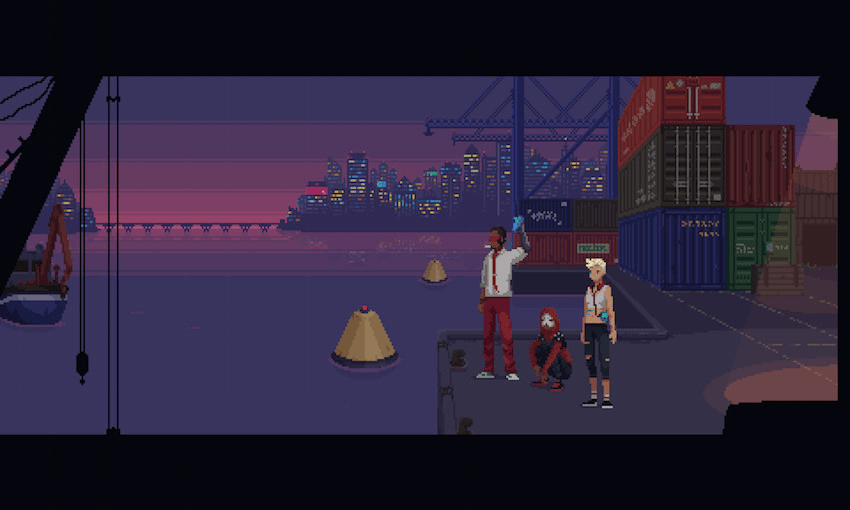 The gorgeous pixel art of Deconstructerteam’s The Red String Club.

The gorgeous pixel art of Deconstructerteam’s The Red String Club.

Deconstructerteam’s new point-and-click adventure game is a progressive riff on an old genre. Sam Brooks goes into what’s special about The Red Strings Club and why more games need to be like it.

The Red Strings Club starts by cribbing one of the most famous film noir openings ever: Joe Gillis’ corpse floating in a pool on Sunset Boulevard. It begins with protagonist Brandeis, having just fallen out of a skyscraper window, wondering out loud how he got to that point. Over four or so hours, The Red Strings Club tells a story that you couldn’t begin to describe as classic: A cyperpunk film noir with an unapologetically progressive bent, some sneakily charming dialogue and an aggressively heady frame of focus. But being classic is overrated.

A new indie game by three-person developer Deconstructeream, The Red Strings Club has the look and feel of the old school LucasArts point-and-click games – think Sam and Max, think Maniac Mansion – a kind of pixel art that even two decades on remains expressive and vibrant. The gameplay is a departure from that point-and-click era: it’s largely a dialogue-based game, where you have to intuit what people are actually saying and why they’re saying it.

The bulk of the ‘gameplay’, such as it is, revolves around Donovan, the deuteragonist who runs the titular Red Strings Club. He’s an information broker and Brandeis’ implied lover – one of the strengths of this game is how fluid it keeps people’s relationships and how murky it’s about how they feel about each other at what point.

More importantly, however, he’s a bartender who has a mystical ability to control how people feel based on what cocktail he makes them. He can mix vodka and absinthe to make someone feel depressed, absinthe and bourbon to make them feel mad (which, no shit that’ll make you feel mad) and so on and so forth. Based on what feelings whatever client you’re serving is having, you can get different information from them – who they hate at work, for example, or who their new CEO is.

This, unsurprisingly, makes him an effective information broker. It also ties into the main theme of the game – the costs of free will. The plot is kicked off when an android escapes from the not-at-all-forebodingly-named Supercontinent Inc. and makes its way to Donovan’s bar. As you might expect in a not-quite-dystopic-but-not-super-great cyperpunk existence, there’s a plot going down to control society.

Now, in the world of The Red Strings Club, people can get implants for any number of things: to stop depression, to become more sexually appealing, to have a larger social presence. There’s even a mini-game where you have to craft these implants and put them into people, along with a sick, twisted subversion where you put the wrong implants into people to make life easier for yourself down the road.

The game dovetails into a really interesting, and genuinely thought-provoking discussion of free will and what that means to society. While this is incredibly heady stuff, the game couches it in some of the most sparkling and sharp dialogue I’ve heard in a game since, well, the LucasArts games. Deconstructerteam have done amazing work in not only giving the characters their own distinctive voices but giving the world its own distinctive voice; these characters talk to each other and interact in a very specific way. It’s not just fast-talking 40s noir dialogue, it’s the hyperactive ‘pleasure now’ kind of an attitude married with a world weariness.

It’s a really difficult register to hit, especially in a video game format, and in a game where so much of the gameplay is based around the intricacies of how people interact, that’s really important. So often dialogue can just be a pretty mask to an empty shell – some of BioWare’s lesser games show this off – but the dialogue in this game is deeply felt and reflective of humanity.

For example, at one point, you have to talk to the lawyer from the corporation who has come to check you out. She gives you exactly three questions. Within these three questions, you have to figure out what mood you want to manipulate her into. Do you want her to feel ambitious? Remorseful? Happy? Then, based on what she’s feeling, what questions do you want to ask her to make sure you get the information you need? It’s an intricate game – and once you figure it out, it’s pretty easy to manipulate – but it’s the best attempt I’ve seen at a video game actually trying to mimic the way people interact with each other, and gamify it.

Which, cleverly, links to the entire thesis of The Red Strings Club. We see the world through the eyes of our two protagonists: Brandeis and Donovan. Donovan has no implants, and see the world entirely from behind his bar, while Brandeis is full of implants augmenting his humanity, and trying to bring down the corporation that wants to control people’s emotions. As Donovan talks to the escaped android Akara and brings them to work at the bar, they have deep conversations. If you could get rid of xenophobia, or rape, or murder at the cost of free will, would you do it? Who gets to make those choices?

This is heady stuff for any work of art to get into, and if the game was a visual novel it would be a largely one-way discussion of this theme. But where this game actually uses its medium is by constantly asking you to assess and reassess what you believe about free will. Do you want to manipulate this person to get them to say or do something you want them to do? Is it moral or okay to do that even if the service of the greater good? What if your idea of a greater good is vastly different from somebody else’s?

Every time you mix a drink for an unsuspecting client or use someone else’s knowledge or lack thereof against them, it’s a moment where the game is asking you to question what you think is free will. So not only are Deconstructerteam setting up a game where this theme is beautifully explored, they’re actually engaging you in the action of exploring that theme with every action you make.

Unfortunately, the game loses a bit of momentum before the end. The last puzzle, revolving around some corporate espionage that is extremely my jam, is invigorating and stressful but it takes up maybe a quarter of this already short game. It is then followed by not one but two supervillain-but-also-here-is-the-theme monologues that cut off some of the ideological tree branches that the developers have carefully left hanging, and it makes the game less philosophical interesting than it has been up until that point. It reduces a relatable theme in a too-close-for-comfort world to an obscure trope, and while it doesn’t derail the game, it makes it a less interesting beast at its end than it was on its journey.

Where The Red Strings Club doesn’t lose its way is in its chill depiction of otherly identified characters. There’s been a reasonable amount of discussion around the game’s portrayal of deadnaming – the deadname of a trans woman is used as a puzzle clue – and while I understand the ickiness around that, there’s something incredibly heartening about seeing a game so far ahead of our society. It’s a place where identity is beyond discussion, beyond constant reinforcement and restatement; people are chill about each other’s identities, their life choices, and their histories. The fact that Deconstructerteam does this in such a non-performative but clearly intentional way is commendable – and should be looked at as an example of how to integrate minority groups into video games industry-wide.

And, honestly, the kind of intelligent and witty storytelling that Deconstructerteam is doing here should be a model. You can do a riff on an old structure, both narratively (the game takes cues from film noir, and ‘game noir’ too) and mechanically (ye olde point and click adventure) while still moving the medium as a whole forward. The writing isn’t the conversation tree mode of interaction that we’ve seen for the past 15 years, or the kind of subpar Joss Whedon wit that been taught to take like gospel; it’s genuinely great writing. If you’re a developer, play it. If you’re a gamer, you better play it.