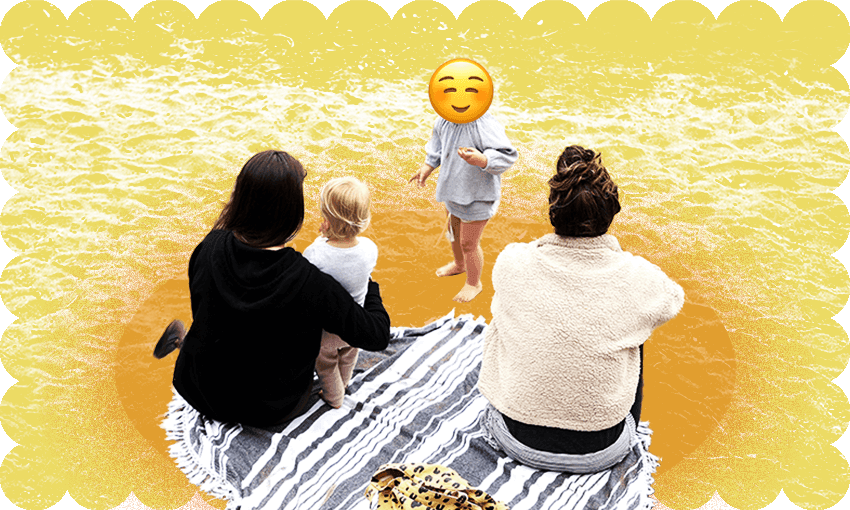 What’s in a face? Parents are concerned about sharing images of their child online. (Photo: Getty Images, additional design by Archi Banal)

What’s in a face? Parents are concerned about sharing images of their child online. (Photo: Getty Images, additional design by Archi Banal)

Information about a child can exist online before they even know what the internet is. Shanti Mathias talks to parents who conceal their children’s faces for privacy reasons.

Usha’s daughter was less than a week old when the requests from friends and family started coming in. She and her partner Sam “were both hounded with people asking ‘have you had your baby’,” the web developer says. While pregnant, the couple had decided not to post any pictures of their child online until she was old enough to make her own decisions about sharing her image. But Sam and Usha didn’t want to be fielding individual messages on top of caring for their new baby: it was more convenient to make a group announcement. They took a picture of themselves holding their daughter, carefully positioning her so only the back of her head was visible, and posted it on social media for their friends and family to see.

Sam and Usha’s daughter is now nine months old, and they’ve only shared a few pictures of her on their Facebook, Instagram, and TikTok accounts, always taking care to make sure her face isn’t visible or concealing it with an emoji. They’ve asked their friends and family to do the same. “It’s important that our daughter gets to make her own decision about posting online, and at nine months, she obviously can’t do that,” says Usha.

They’re not alone: big New Zealand celebrities like Dan and Honor Carter and TJ Perenara don’t post pictures of their kids’ faces. Overseas, celebrities and influencers like Chris Pratt and Kirsten Bell cover their children’s faces with emojis when sharing photos with their millions of followers.

The ethics of consent are tricky when it comes to sharing information about children, says Sean Lyons, the chief online safety officer at Netsafe. Major social media companies’ privacy policies are developed in response to laws in the US – although by conducting business in New Zealand, they’re still subject to the 2020 Privacy Act. These platforms have age limits set in the terms of service, delineating the age at which a child is expected to be able to make an informed decision about sharing personal information with the world’s biggest companies – usually around age 13. “You’re asking users to abide by an arbitrary number,” Lyons says. “You don’t turn 13 and get a degree in privacy.”

But regardless of a child’s ability to make an informed decision about their digital footprint, many parents want to share information and pictures of their children, before and after they’ve turned 13. “Parents make decisions on behalf of their kids all the time,” says Lyons. “But young people grow up, and the information we share when they’re young doesn’t disappear.”

But why does the pressure to share photos of children online exist at all? “Sharing is natural,” notes Lyons, pointing out that in earlier generations photo albums might be kept in the living room to be shared with guests, filled with pictures of kids taking their first bath or winning cross country, all shown without the express permission or sometimes even presence of the child. Social media often feels like an extension of that living room, a place where social relationships are conducted through messages, calls and yes, sharing pictures. People are interested in each other, and interested in images of each other – thousands of years of art history demonstrates that as effectively as the urge to friend request an acquaintance on Facebook so you can look at pictures of them in other contexts.

But compared to a photo album, where only one or two copies of a photo might exist, platforms like Facebook and Instagram change the mechanics of distribution. A photo of a child is held on remote servers, replicated onto the screens of anyone who scrolls past the post. There’s a difference, too, in the permanency: a new friend you meet at a festival would most likely never see the crinkled photo of your younger self that your dad keeps in his wallet, but it would be a matter of a few clicks to find that image if it was posted on a public profile.

To Facebook and its ilk, it doesn’t matter what kind of content a user shares, just that the content is there – they profit from making their platforms an extension of users’ social lives, and encourage personal posts to build engagement. “The way that algorithms work, people are ‘rewarded’ when they post things that other people like,” says Lyons. Sam agrees. “I think people are seduced by the validation these platforms are designed to provide,” he says. Likes and comments appreciating the child you already love to pieces are especially validating, even if the child can’t understand how their image is being used for other people’s advantage. Sam has to consciously resist using his child’s image to seek this validation.

There are broader implications of megacorporations profiting from reams of data about children, usually posted in good faith by people who love their kids and want to share that with their communities. For many parents, though, it’s the risk to their individual children that is concerning. “I’ve read a lot of horror stories about how people’s photos are used, copied and pasted onto someone else’s phone, screenshotted and misappropriated,” says Sela Jane Hopgood, Pacific communities editor at The Spinoff, who has been active on social media since her early teens. Since her accounts are public, she doesn’t know who may hold images of her child – but she can at least conceal his face.

While these concerns are valid, and Netsafe is working to help parents and caregivers mitigate the risk of people individually targeting children with predatory intent, Lyons points out that the harms can be broader. Images which create social embarrassment or lead to bullying from a child’s peers, even if the intent of the adult sharing the image is positive, can hurt too.

Individuals like Hopgood, Sam and Usha choosing to hide their children’s faces are in the minority. Social media isn’t designed to make individuals thoughtful about their own privacy – it’s not even set up to encourage us to read the terms and conditions. Changes to the mechanics of the platforms could help; Hopgood suggests a “are you sure you want to post a picture of a minor” prompt when facial recognition detects a child, similar to the Twitter function that asks people to read an article before they retweet it.

But large tech platforms profiting from the norms around posting pictures will likely be slow to instate these functions unless regulation asks them too. In the meantime, Lyons says that in the inevitably digital world the best thing parents can do is model thoughtful behaviour to their own children. If you’re thinking about sharing a photo online “don’t just ask your kids – be seen to be asking your friends or your partner if they’re OK with it,” he says. “That’s such an important part of developing healthy boundaries in online life for our children.”