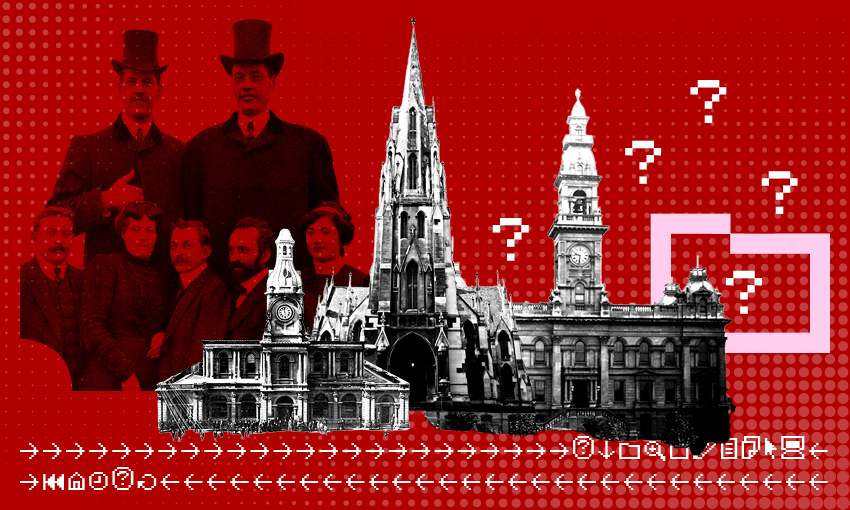 Thousands of conspiracy theorists believe our entire architectural history is a lie. For IRL, Josie Adams dives into an alternative world history: the Tartarian mudflood.

What if I told you the Dunedin railway station pre-dated European settlement of New Zealand? Thousands of people online are convinced of an alternative historical truth: a giant, highly advanced global empire came to our country before Europeans, and it built the railway station.

The ancient empire of Tartaria is at the centre of a conspiracy theory that’s growing online, spread via YouTube and Reddit, where more than 14,000 people regularly engage with what’s been called “the Qanon of architecture”. Proponents of the theory say there was once an advanced, giant civilisation that dominated the Earth’s surface; Tartaria. As recently as 200 years ago, a flood of mud destroyed these people and most of their buildings. Ever since, there’s been a cover up going on. But what evidence is there of this supposed empire? Why cover it up? And who exactly believes this stuff?

The Capitol in Washington, the pyramids in Egypt, and the Great Wall of China are all supposed remnants of Tartaria. Too massive to be destroyed in a flood of mud or torn down by our tiny modern hands, they stand tall and strong as clues that a civilisation much more advanced than ours once ran the world. Other buildings, like Old Penn Station in New York City and the Moir’s Chambers in Perth, were intentionally destroyed to hide Tartarian history.

And if they made it to Australia, of course Tartarians made it to New Zealand. Take a walk around any major city and you’ll notice our oldest buildings have incredibly high ceilings. Who needs a ceiling that tall? You’ll notice basement windows, often cut in half by the ground. Who would put a half-window into a basement? The answer to both these questions, according to proponents of the theory, is: a giant race of technological wunderkinds.

Remnants of them remain. Places like the old government building in Christchurch, the Dunedin railway station and Auckland’s Northern Club are too big and technically complex, they claim, to have been built by the few scattered European settlers living in New Zealand in the 19th century. Even old maps of our country from the early 19th century could be proof of the empire’s existence, because who named all of those places on the map? Tartaria fans believe it couldn’t possibly have been the puny Englishmen sent here to club seals.

More obvious evidence of Tartaria may have been deliberately destroyed post-mudflood. Luna Park in Auckland, complete with its Tartarian clown-demon idol, was burned down, and adherents of the theory believe the 1931 Napier earthquake was an opportunity to demolish the city’s Tartarian architecture.

Redditors and Youtubers who subscribe to all this are drawing, very loosely, on a real historical place: you may have heard of the “Tartars”, historical residents of a region spread across Russia and China. They weren’t part of an empire; they were residents of a massive region with many different cultures lumped together into “Tartary” by Europeans who didn’t care to understand the area beyond its association with Ghengis Khan. As Skeptoid points out, something as simple as re-labelling a modern map of Eurasia as “Tartary” can get conspiracy-prone minds racing.

The Tartarian theory was originated by pseudohistorians, who combined a Russian fervor for their lost empire (“Tartaria” being the supposed real name of Russia) with an alternative historical chronology; basically, all known historical events happened in a much shorter period of time than we are told. YouTubers picked up on these separate subjects and combined them, along with other strange things – eg the fact old photos of cities always look to be covered in mud, that World Wars I and II wiped out a ton of old world architecture, and pictures of old-timey people with gigantism, like Robert Wadlow – and developed the Tartarian mudflood theory we’ve described.

Robin Aitken, an architectural historian based in Wellington, was blunt when approached for comment on “Tartarian” architectural features: the mud everywhere, he said, was probably because of horses. “I think horses can answer for a lot of this,” he said. “Horse shit, horse hooves pounding the horse shit.” Another factor contributing to the mudslide-looking streets of the 1860s, he said, is that colonial cities were very slow to upgrade roads. “In the beginning chuck up some kitset colonial buildings and wait until the street is so fucked that you need to do something about it,” he said.

And what about the houses built on an incline? “True,” he admitted. “The layout of Dunedin was drawn in Edinburgh and didn’t account for the topography, so the streets don’t follow more gradual contours making for some steep streets.” But, he said, this style can actually work to flatten social hierarchies. “If you build following the same direction as the slope, you might achieve a number of floor levels between the top of the slope and the bottom along the length of the building, and can achieve interesting things like multiple ‘ground level’ entrances to residences or tenancies, levelling the social hierarchy seen in Paris and other flat European cities, where the aristocratic live on the deuxieme etage [second floor], sufficiently above the stink and mud of the street but not too far up the stairs.”

This socially progressive sloping model, he said, is also behind the basement windows. “[They were] working on a horizontal social hierarchy where plebs had rooms at the back, in the slope with windows looking out to a subterranean hole,” he said.

But why is Aitken helping to cover up the great empire of Tartaria, and who made him do it? The only culprits Tartaria believers can point to is a nebulous new world order; the government, or shadow government, or deep state. Exactly why The Man has hidden the history of Tartaria is unclear, but it has something to do with profiting off electricity we could be getting for free.

Since 2016, the theory has been picking up traction. In recent years New Zealand has started to pop up in videos and posts; now we have our very own spokesperson. Local YouTuber David Obeda – who creates content under the name King Dave – has been posting videos consistently. He pores over old photographs and goes for walks around our major cities, pointing out evidence: mud-drowned basement windows from the flood; aerials on top of 19th century buildings that once conducted electricity; and roads far too wide for your traditional horse-and-buggy, but the perfect size for giants.

“I came across the theory through YouTube channels like Martin Liedtke and autodidactic, who are now friends of mine,” Obeda told The Spinoff. “I was just researching and came across their channels and pretty much had my mind blown.” Once he learned about Tartaria, he dedicated his channel to exposing the truth behind our architectural history. Since 2019 he has posted 59 videos, most of them on Tartaria. “In doing so I am now the lead alternative historian in the country.”

The core of his and other adherents’ argument seems to be: how could 1800s settlers build these things? It’s too complicated, the buildings are too big, and Hōne Heke was giving us so much trouble Aucklanders couldn’t have had the time. “The grand architecture and ornate features in all of these neo-gothic/Greco-Roman buildings across the world are impossible to have been done by hand, especially back in the time frames they give us,” he said. In truth, it’s nice to see a little inversion of the Erich von Däniken “indigenous people can’t build pyramids” conspiracy.

This is not the case with Tartarian history. Obeda says he believes Māori culture as we know it was brought in as part of the cover up. He is, himself, Māori, and admits he found learning this “shocking”. “Most, if not all of our cultural history has been fabricated. Racial identity was something the controllers brought in to divide us,” he said. “Tartaria was a worldwide civilisation that lived in harmony, and had access to technology that we could only dream of.”

Some Māori pā and redoubts, he said, are actually buried “star forts” (Tartarian military bastions). “They say the sites are sacred to keep people from snooping, but I guarantee when we start digging them up we won’t be finding old taiaha but buried ancient architecture.”

Since 9/11, “truther” movements have been on the rise; rapidly-changing technology, social mores and, yes, architecture, can stir up questions about where the world is going, and who’s driving it. Obeda says there is growing interest in the Tartarian theory: “The reason I do this is out of love. Once people realise our history has been completely fabricated, it will bring everyone together.

“The truth will prevail in the end,” he added.