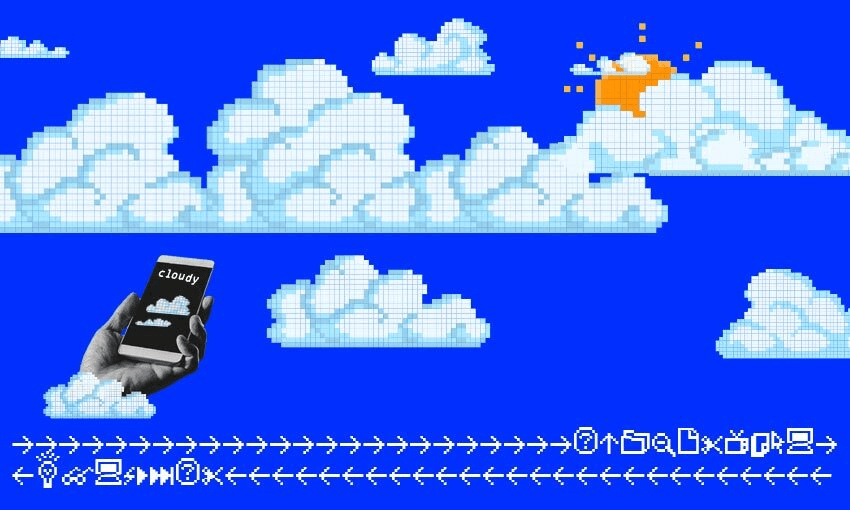 The fascinating tech behind your weather forecasts

At Niwa and MetService, predicting the future involves sophisticated technology and an absurd amount of data, while climate change adds urgency to meteorologists’ work. Shanti Mathias reports for IRL.

Maybe you’re planning a picnic, or choosing which outfit to wear. Checking the weather is an automatic reflex, a tap of fingers to see a sunshine emoji or a picture of rain on your weather app of choice.

This simplicity belies an intricate network of tools, data, technology and human ingenuity responsible for creating the weather forecast. Above Paraparaumu, shiny, beanbag-sized hydrogen weather balloons are released daily, sending readings from throughout the atmosphere to MetService. As the balloons rise, the hydrogen within them expands until they are the size of a small house. MetService receives the data. The balloon explodes.

The forecast also depends on the buoy offshore from Hokitika, measuring waves and sending the data to Niwa for analysis; on photographs of clouds beamed down from a Japanese satellite orbiting 35,000 kilometres above the Pacific; on a radar in Taranaki processing microwaves reflected from raindrops.

To generate the weather forecast everyone accesses, meteorologists turn torrents of data – information about air and water from around the country and the world – into a forecast that can be a sentence on the radio or a cloud emoji beneath a touch screen. At MetService, New Zealand’s national weather authority, and Niwa, a Crown Research Institute focusing on climate and water science, meteorologists work around the clock to process data into forecasts.

“People haven’t realised how good forecasting has gotten in the last few decades,” says Tristan Meyers, a meteorologist and forecaster at Niwa. A generation ago, knowing the weather beyond two or three days was largely guesswork. Now, he says, forecasts up to five days away are at least 80% accurate, and longer range forecasts are getting better, too.

The improvement is largely thanks to technology, especially data processing, says Lisa Murray, meteorologist and science communicator at MetService. “We’d be up there with the most data-heavy industry in the world,” she says. Think of it like this: weather is about the temperature and rainfall, yes, but also about wind strength and direction, humidity, pressure and more. Effective weather forecasting requires estimates of these measurements at, say, 10 metre intervals above points on land, all the way up through the atmosphere and forward through time.

Both MetService and Niwa input these many, many data points into their own weather models, which are essentially representations of the state of atmosphere, extrapolated into the future. MetService uses three “global models” – computer simulations of the entire atmosphere – to predict the weather. The models, which are from the American, British and European weather bureaus, are combined with forecaster knowledge of how weather systems interact with New Zealand geography to produce the most accurate prediction.

Meyers sketches on the table, showing me how observations from around the country are fed to models. His finger draws intersecting gridded lines, a representation of how these models imagine the heat and air and water that shift through the atmosphere to create weather.

Whether weather models are produced at MetService and Niwa or adapted from overseas, running this enormous volume of information requires supercomputers. Niwa’s supercomputers, Mahuika, Kupe and Māui, can process more than two thousand trillion calculations per second. MetService run their simulations on Amazon Web Services’ cloud.

Despite this processing power, some weather models “take a long time to run”, Meyers says, so they are updated only twice or four times a day, and longer term climatic or seasonal models are updated once a week or less. He shows me some of the different versions of weather over the next few days and the probability of each, clouds of orange – that’s precipitation – skidding across the ocean and catching on the Southern Alps.

The volume of data weather forecasting requires offers a glimpse into how humans use technology to grasp almost unimaginably complex systems. Murray refers to the “butterfly effect”, the idea that in a big system like the atmosphere, a butterfly flapping its wings in Mozambique could cause a cyclone in Manila. “There are millions of observations and variations,” she says, “and each has a knock-on effect.”

“There’s chaos in the weather,” Meyers says, a candid admission by someone whose job is turning that chaos into order. Different kinds of modelling, including “ensemble techniques” where multiple models are run at once to give a spread of outcomes, and machine learning, where models are fed the actual weather compared to their predictions so they can learn, help to diminish the “inherent unpredictability”, but the atmosphere is large and ever shifting, and no model is perfect.

Forecasts predict the weather, the air we breathe, the salient effects of the atmosphere in the very near future. But weather is inseparable from climate, the long term trends of temperature and rainfall. Is climate change altering how predictions are done?

Not really, says Murray. “The increases in temperature are automatically fed into the model, it starts at a warmer temperature and produces predictions from there.” The forecaster’s role is to respond when the model produces extreme weather events, like flooding in Westport or Canterbury. “We [can’t] look at it and think, ‘The model must be wrong’, because these extreme events are possible.”

Climate change is even having an effect on the weather observation stations around the country that relay information to forecasters. “We’re working on moving the wind anemometer in Westport,” Murray says, as the instrument, which measures wind speed and direction, is at risk from coastal erosion. While weather-observing instruments are built to withstand extreme conditions, flooding can render the stations unable to transmit. In the February 2020 floods in Fiordland, for instance, the rain gauge at Milford Sound was submerged. “I was quite surprised. We’re seeing more of these extremes,” says Murray.

Aspersions are often cast at those trying to make a profit from the future: horoscope writers, owners of psychic octopuses, or financial speculators. Weather forecasting, however, is a scientifically legitimate way to augur the future, a future of which climate change is a part.

“Looking into the future becomes a habit,” Murray says. Living with the data makes climate change something concrete to her. “There’s already one degree of warming. That means more moisture in the air, systems have more punch to them.”

Predicting the future means nothing, of course, if people don’t understand it. For both MetService and Niwa, climate change ups the stakes of weather communication. Having the data and the technology to create forecasts is only one piece of the weather puzzle.

“It’s no longer good enough to do a good forecast if people don’t know about it,” Murray says. One of the main parts of her job is to use social media, both to relay forecasts and view photos from across the country sent in by followers. “The feedback we get on social media helps the forecast room,” she says. “We know what hail in Timaru or flooding in Gisborne actually looks like.”

The forecasts are important for public safety; MetService is the national provider of severe weather warnings, delivered through their app and website as well as media channels. “I make sure all my friends have the MetService app so they can get watches and warnings,” Murray says. “It’s life-or-death forecasting … In a changing climate, we’re going to see more extreme events. I want to keep people safe.”

Weather apps, which most of us have in our pockets, may bely the complexity of the information that goes into a forecast, but that’s a good thing, Meyers says.

“You want people to have that information [about the weather],” he says. “You don’t want them to have to do this.” He pulls up the interface he uses to talk to the supercomputer, lines of green code on a black background. My brain immediately goes into ‘I do not understand the computer’ panic mode and I instantly decide that I love the simplicity of my emoji-based weather apps and could never work as a meteorologist.

“The way the internet interacts with weather is in its infancy,” says Meyers. Behind him, the weather is coming in; the overcast sky gathering plump streaks of grey, the northerly puffing against the windows of the Niwa building at Greta Point.

I ask Meyers how it feels to think constantly about what lays ahead. “It just doesn’t stop,” he says, and I’m not sure if he’s referring to the future, the weather, or both.