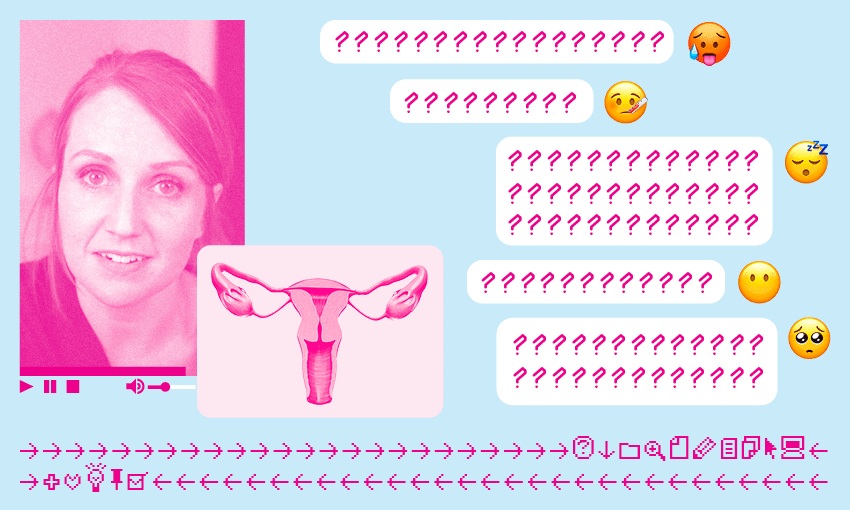 Southland-based YouTuber Danielle Jones, aka Mama Doctor Jones, is using the algorithm to teach gynaecological health to the masses. For IRL, she tells Shanti Mathias about why this work matters.

“I never have any downtime,” says gynaecologist Danielle Jones, talking to me from her home office in Southland. It’s easy to understand why: the American doctor is a global star, with over a million subscribers on both YouTube and TikTok, as well as 280,000 more on Instagram. In addition to YouTubing and practicing medicine, Jones is also a parent to four young kids.

Jones – known as “Mama Doctor Jones” across the internet – describes her videos, which focus on human reproduction and sexual health, as “edu-tainment”. Want to know how an IUD is inserted? Wondering if drinking cranberry juice will actually help with a UTI? Jones has videos addressing these questions, and many more, often with entertaining sound effects and lurid examples.

Her deep passion is evident: whether it’s the wide-eyed wonder as she watches a giraffe give birth, or the curiosity in her voice as she explains an ultrasound video, Jones is invested in her content.

Jones is aggressively pro-science; she even sells merchandise, shirts with slogans like “Vaccinated because… Science” and “You don’t get to be offended by science”. On TikTok, she posts sassy videos replying to, for instance, a commenter who suggests that she shouldn’t be a doctor by saying that the various boards of medicine she’s certified to practice under don’t agree. For the most part, she doesn’t mind the pushback: “I’m confident in pretty much anything I take on as a discussion,” she says.

Mama Doctor Jones videos often reference recent academic research in her field, explaining them in simple terms for those without a scientific background. She links the papers she cites, highlighting key terms on the screen, making the science legible to those who don’t have the years of training that she does.

As a medical practitioner, Jones needs to keep up with development in her field anyway, so her social media content dovetails tidily with her other work. “I find a topic that was relevant [clinically] that week – almost everything I do online is related to my day-to-day life as well.”

Jones learns things from her audience, too, and she tries to be open about that process. “Criticism from my audience is sometimes extremely helpful – I would know so much less about cultural practice and the importance of cultural sensitivity and the LGBTQIA community if my audience didn’t constructively criticise things I do,” she says.

When making a video mentioning vaginal steaming, for instance, she is clear that the practice has no medical use, but is important in some cultures. That said, she draws a clear line between this kind of feedback and people who “literally just criticise anything I do”. She’s bemused by why these people watch her content at all. “I know not everybody is going to like my content and that’s OK, it’s not for everyone, but I’d like to have those [critics] just go,” she says.

That consideration of her audience, and value of accessibility, is central to what Jones does. “I definitely think there are people who are less well served by traditional models of dispersing medical information,” she says, picking her words carefully. Perhaps the popularity of her videos are an indictment of the education and healthcare systems – not to mention digital platforms – which often don’t provide people with clear information about sexual health. Jones knows that there are people who “have felt for a long time that they just weren’t heard, in gynaecology and pregnancy care they were ignored, their pain was ignored”. How can she offer clear, accurate information to this audience before the predatory purveyors of misinformation do?

“People tend to believe the first thing they hear, and it’s much harder to unlearn that,” she says. In this respect, the size of her audience means she has to be careful – the same algorithms and human impulses that lead to thousands of clicks on her videos can also spread untruths about health, and there’s the possibility that “responding to these [myths] will give them more traction than they had before I said anything.” Her strategy is to try to address things early “so I can go back and say, ‘Y’all can watch that video [that already exists]’ – it’s much more effective that way.”

The titles of her videos offer a sense of how she’s trying to do this: bright thumbnails labelled ‘5 tampon myths you should NOT believe’ or “10 pregnancy rules your doctor needs you to know”. Didactic? Sure, but that’s the point. These are the kind of make-you-click titles the YouTube algorithm loves, and Jones says she actively looks for trends to join. “My nerdy science brain … loves learning to use social media platforms on their algorithmic level.”

Thumbnails for videos – Jones’s face radiating shock, eyes wide, eyebrows raised – are strongly emotive, another way to get picked up by the algorithm. The Mama Doctor Jones channel often uses familiar video formats like reaction videos, where health TikToks or episodes of I Didn’t Know I Was Pregnant are met with Jones’s straightforward explanations of the science behind the biology. And her algorithm expertise works – behind her, in the southern autumn sun, glitters a gold plaque from YouTube commemorating her million subscribers, a milestone Jones reached last year.

Does Jones think more doctors should do what she does in demystifying healthcare via social media? “I think it’s unfair to ask people to do the amount of clinical work we do, [the] hours and years of our lives and also say you have a duty to be figuring out how to do this on the internet,” she says. She does both clinical work and YouTube because she genuinely enjoys social media, but says it “has to be a labour of love”.

After all, many doctors are busy, and Jones is particularly so – we’re speaking on a Saturday afternoon after she rescheduled our Friday interview, emailing me at 1.00am after an 18-hour shift. The extra shifts she’s taking on are a result of the well-documented understaffing in the Southern DHB, especially in the gynaecology department.

As a result, Jones has had less time to do her social media mahi, which she’s sanguine about. In the third year of the pandemic, with headlines frequently declaring the pressure on health systems and frontline workers, her videos offer a glimpse of the pressure that individual workers are under.

On social media, Jones describes her family as “nomadic”. I feel my “ask about New Zealand” instincts kicking in. She says she’s enjoying living here. “I think only good things come from seeing more of the world,” she says. Moving country “offers perspective and widens your eyes to different people and different practices”; already, she can see her kids being more sensitive and open-minded. She doesn’t know how long she’ll stay, but she hopes to learn more about Māori birth practices, her mouth still getting used to forming te reo words.

And what about her channel? “I’m thrilled to be able to give so many people information that is sometimes hard to get in everyday life and is a bit taboo sometimes,” she says. She wants to “lean in” to social media while she still can, cognisant there might be an “expiration date” when she’s no longer relevant. For now, though, there’s plenty to learn, and lots to teach.