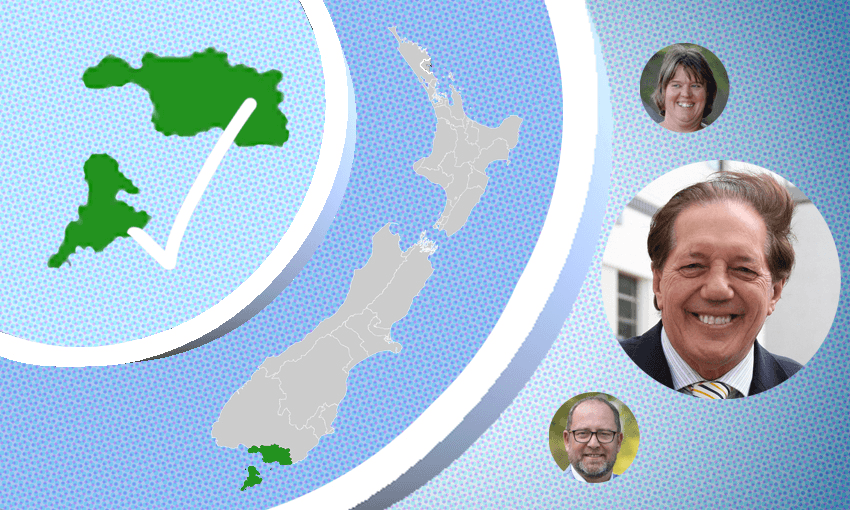 Race briefing: the betrayals and back-stabbing behind the Invercargill election

At the bottom of the country is the city Keith Richards once referred to as “the arsehole of the world”. In slightly kinder words, ex-English rugby captain Brian Moore called it “the Chernobyl of the South Island.” Much like both arseholes and nuclear radiation, the chaos of Invercargill spreads further than you’d think. The district stretches south to encompass Bluff and Dog Island, and goes north far enough to frame Makarewa. The city is a gateway to Stewart Island, and freedom from the tyranny of the north.

And much like Chernobyl’s nearby settlement Pripyat, Invercargill has risen above its negative press and become something unique, compelling, and often delightful. It’s got cheese rolls (the sushi of the south) and one of the country’s most successful refugee resettlement centres. Southlanders call jeeps “trucks,” they roll their ‘r’s, and they have glass in their roads. With a population of just over 55,000 Invercargill may technically qualify as a city, but it’s a city unlike any other on this planet. We can’t expect their local election to be like any other, either.

What are some of the big issues for Invercargill this election?

Culture is a huge issue for Invercargill locals this election. The city was once a bustling cultural metropolis. Sure, it was no Wellington, but it had a certain je ne sais pourquoi. Now the art gallery is closed, the museum is closed, and rumour has it Bill Richardson’s Transport World hasn’t hosted a wedding since early last year. The city is in danger of becoming a cultural desert, and its people are seriously worried. They need community spaces, artistic or otherwise.

The problem, as always, is money. The art gallery, museum, and historic buildings need fixing, and not just a little. The council also has plans to redevelop the CBD, and must plan for the potential loss of income from the Southern Institute of Technology (SIT).

That’s because the government is considering a polytech merger across Southland and Otago, in a move opposed by almost everyone in both regions. The merger would centralise SIT with the other 15 polytechs around the country. Otago and SIT have notably outperformed the more northern polytechs, which are struggling. The people of Invercargill are rightfully distraught about the institution’s local management being taken away. SIT was a huge investment for Invercargill. Its presence has helped build community, funds, and job opportunities. Any incoming mayor would need to commit to the ongoing Southland and Otago bid for autonomy.

One of the council’s most recent controversies was surrounding job opportunities for Invercargill’s disabled community. Southland disAbility Enterprises (SDE) holds the recycling contract for Invercargill, but earlier this year a WasteNet advisory group recommended another service provider to the council. It went to a vote, which was split down the middle, with Tim Shadbolt casting the deciding ballot. The public still recall exactly who voted for what, and of those running for mayor only His Shadboltship voted in favour of retaining SDE.

Sir Tim Shadbolt, obviously. If elected, this will be his ninth term in office. He has been mayor of Invercargill for 21 years. Yes, he’s faced criticism recently. His councillors were “extremely disappointed” in him less than a month ago, and he has come under fire for spending upwards of $3,000 on wristbands that read “I met the mayor”. At 72 years old, it’s not surprising his opponents are going for the Retire Gracefully angle, with some implying his brain doesn’t work as well as it used to. However, losing track of council meetings is not an indication that Shadbolt is in decline. He has always been this way. When acting as mayor of Waitemata City in the early 80s he lost his mayoral chains twice. Shadbolt says “hell no” he’s not senile. “If I develop anything like a sniffle, councillor Amundsen morphs into something akin to Gollum eyeing up the mayoral chains,” he told Stuff.

Darren Ludlow has been on the Invercargill council almost as long as Shadbolt, and even served as his deputy mayor for a while. He knows the ins and outs of council, and while he recognises the financial issues facing the city his first priority would be getting the house in order. “People need to understand what their role is,” he says. It’s true, the shambolic nature of the council – including Shadbolt’s shutdowns – have stood in the way of getting much done. However, there’s a personal element to this challenge. In 2017, Ludlow pulled a “you can’t fire me, I quit” and stepped down from his role as deputy mayor to focus on his other duties in the council. Interestingly, the council records describe his replacement’s appointment as “noted” by the council, not voted or accepted. Shadbolt hand-picked her, and that woman was…

Rebecca Amundsen, Shadbolt’s current deputy mayor and the most immediate and cutting betrayal in his challenger line-up. Amundsen’s main focus is community engagement – it’s what motivated her to join the council in the first place. She considers herself a strong leader, implying that Shadbolt is a weak one. While the public may hate her for criticising Shadbolt’s tendency to go on tangents, she has a strong support network: her mum said she’ll go and put dog shit in haters’ letterboxes.

Steve Chernishov, who has no beef with anyone on council, is the fourth option. He’s got experience in graphic design and accommodation. This is great, because if elected the council will be able to save money on both a website designer and redevelopment planner. His platform is based largely on housing and waste management, but he’s made it clear that Invercargill’s crap nightlife also needs fixing.

And who’s most likely to win?

In his 20 years as mayor, no-one has unseated Shadbolt. He has an inexplicable charisma despite, or perhaps as a result of, never fully opening his eyes. He’s a master of filibustering, having set the record for the longest single event in New Zealand television history after being interviewed for 26 consecutive hours; a stint he later said he felt could have gone on longer.

Even Amundsen and Ludlow know he’s going to be hard to beat. He describes Shadbolt as “an icon”. She describes him as “an institution”. It’s hard to characterise an anti-Shadbolt voter; someone looking for new blood (Steve Chernishov) or looking for a trusty old model with a little more mileage left (Darren Ludlow)? It doesn’t matter. Likely outcome: the vote will be split, and Shadbolt will continue setting the record for longest-running mayor in New Zealand.