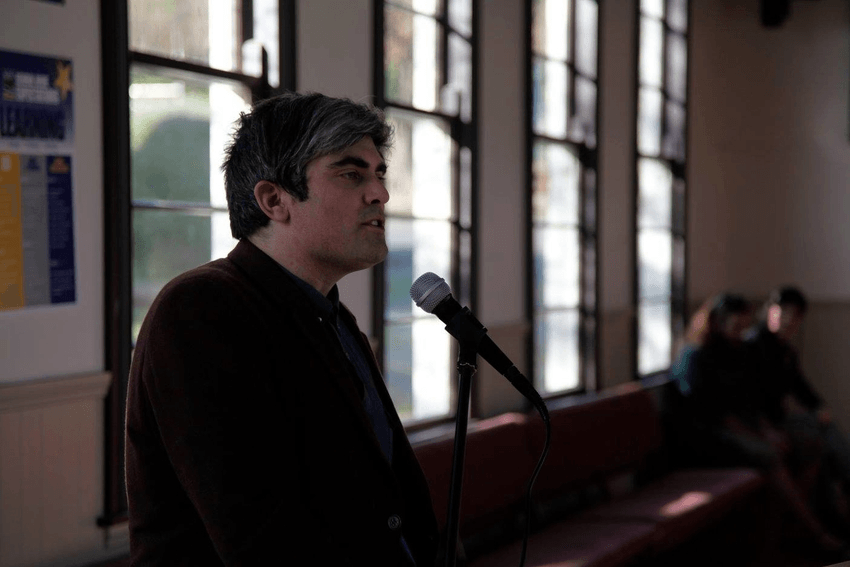 Dunedin’s new mayor Aaron Hawkins is the first official Green Party mayor in NZ and, arguably, the first to represent the city’s student population as much as its older residents. Josie Adams, who guessed he would win, asked him some questions about it.

Mayor-elect Aaron Hawkins was at a children’s birthday party when he got the call. He started his new job the next day by joining in the student clean-up and memorial to Sophia Crestani that took place on Dunedin’s notorious Castle and Dundas Streets. Hawkins is a young father, an experienced city councillor, and was once a big name in student media (in some circles, he still is). He’s familiar with Dunedin’s many faces, and maybe that’s why they voted for him.

Fourteen candidates threw their hats in the ring to take over from the retiring Dave Cull. When I said 35-year-old Green Party candidate Hawkins would win last month, our readers said, and I quote:

That no-one thought Hawkins was a top contender for the role is bizarre. He’s been on council for two terms already, received plenty of coverage by both the Otago Daily Times and Critic, and mayor Dave Cull himself gave him the nod. His win wasn’t guaranteed, but it was worth putting money on since Dunedin uses STV, a voting system which benefits a broadly popular candidate like Hawkins. Name recognition and a nice suit count for a lot. Almost the entire way through the race, Hawkins was polling equal or just ahead of his main competition, Lee Vandervis.

I reached out to Hawkins to ask him about proving the haters wrong and what his win will mean for Dunedin.

How are you feeling?

Overwhelmed? Numb? Mostly just incredibly humbled to have been asked by the community to lead our next council.

I feel very professionally vindicated by your win. Why do you think people ever thought you would lose?

Haha. Your punditry was thankfully closer to the mark than Francisco’s [ex-OUSA president and Green Party hack Francisco Hernandez]. Seriously though, I was optimistic that we would get a positive outcome for the city, I just wasn’t confident that it would be me.

Have you heard from Lee Vandervis?

Lee got in touch on Saturday night to congratulate me on winning by a decent margin.

I see he’s still on the council. Do you think there’ll be much simmering resentment at meetings? Are you going to cackle and shake the mayoral chains at him?

I think it’s important that all voters are represented around the council table, and a sizable chunk of them have chosen Cr Vandervis to do that for them. Having a range of views presented, in a constructive and collegial fashion, is healthy for local decision making.

How pleased are you with the council you’ll be presiding over?

The message we got on the campaign trail was that people were positive about the city at the moment, and broadly supportive of the direction we were heading, around environmental wellbeing in particular. The makeup of the elected council largely reflects that, which is good news for building on what we’ve done over the past six years.

What does it mean for you to be NZ’s first Green Party mayor?

I’m the first elected mayor to have stood under the Greens banner, though we’ve had members (Sukhi Turner) and former members (Celia Wade-Brown) get elected as independents. So it’s big news for the party. But more generally what I think it shows is that in local government people are more prepared to look beyond party political tribalism, and vote for individuals that they think are competent and capable of doing the job.

How do you feel about the title of NZ’s first psytrance mayor?

A few weeks ago they said that Dunedin was about to elect a mayor that knew what breakbeat hardcore was, which was quite the endorsement, but this is up there for sure. That aside, I definitely feel like I wear shoes far too often to be able to accept this accolade in good conscience.

Any more firsts up your sleeve?

Two? Oh sorry I read this as fists. It’s been a long weekend.

What will your mayoralty mean for the Port Chalmers noise scene?

I know this is supposed to be a joke question, but I remember running into Chris Heazlewood a few years back and he said that he had never felt represented by a local politician in his entire life. It’s important to see that your elected members share the same values and priorities as you. But yes, I’ve had at least two messages of congratulations from Robbie Yeats so far.

If your best public transport ideas are enacted by this council, will you stop hitch hiking everywhere?

I haven’t had much time to think about my future hitch hiking plans this weekend because I’ve been too busy answering questions about whether or not I’ll keep hitch hiking to work. Efficiency of the bus service aside, if I don’t have any work to do on the way in to the city it’s a great opportunity to get 15 minutes of unfiltered feedback from people about what’s going on in the city. Not that I think I’ll be short of that in the coming months!