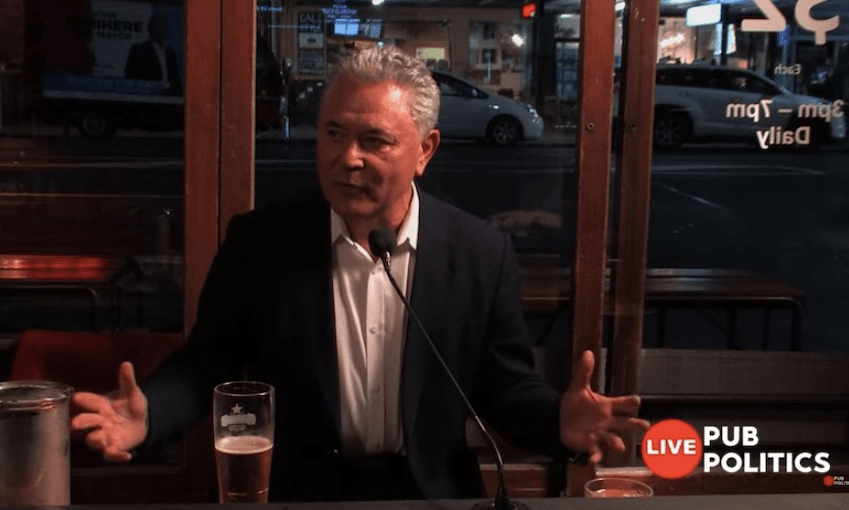 Cheat sheet: How to not say Nazi stuff at an Auckland mayoral debate

Last night Auckland mayoral contender John Tamihere said “sieg heil” when answering a question on diversity. Sadly that has forced us to put together a cheat sheet on how to not say Nazi phrases in debates.

About one hour and 18 minutes into a pub politics debate at Chapel Bar on Ponsonby Rd last night, Auckland mayor Phil Goff was speaking on diversity. “In six weeks time I’ve got a grandson that will be born that’s a quarter Māori, a quarter Filipino, and a quarter Irish and a quarter English, and I’ll be really proud of that kid. That kid will represent the future of our city,” he said.

The debate’s moderator, Martyn ‘Bomber’ Bradbury, decided to give Goff’s opponent John Tamihere a follow-up question. “Uncle John, what do you wish for the grandchildren of Auckland?” he asked.

Tamihere started off his response: “Well, I say sieg heil to that”.

We didn’t expect to have to do this, but in light of these developments, The Spinoff has rustled together a handy cheat sheet on how to avoid saying Nazi stuff during an Auckland mayoral debate. Following these guidelines will help you improve your performance as a debater. Crucially, it will assist you in not repeating any Nazi slogans, or advancing any Nazi ideas during even the most robust political exchanges. In fact, if you read this article, you may be able to get through a debate without once having to allude to the existence of the Nazis. Are you ready? Let’s begin.

First off, if you find yourself in an exchange on your city’s diversity and a response pops into your mind, stop for a second. Ask yourself: ‘is the thing I’m about to say a Nazi thing, or in any way related to the Nazis?” If the answer to either of those questions is “yes”, pause, reflect, and don’t say it.

This is where Tamihere went wrong. He heard his opponent talking about Auckland’s diversity, and he said “well I say sieg heil to that”. Sieg heil is a well-known Nazi phrase, and was used to accompany the Nazi salute. It could be interpreted as being heavily Nazi. Saying it in response to an endorsement of diversity could be interpreted in concerning ways. Are you saying Auckland’s diversity is Nazi in nature? Are you being racist? These are questions people may ask.

It’s possible Tamihere thought ‘this is a joke’, or ‘this will be funny’. If you have those thoughts, don’t listen to them! Nazi phrases are never funny, because the Nazis killed millions and millions of people in the most horrific act ever recorded in human history. Referencing them is not appropriate in a debate on topics such as ‘should we change our recycling system y/n?’.

On a related note, if you find yourself moderating a debate where someone says ‘sieg heil’, feel free to ask what they meant by that. A response could include a question such as “why did you say the Nazi thing?” or even a statement: “It’s really not appropriate to say that Nazi thing”.

One thing not to do is grin, laugh, and bob your head excitedly, as if to say “this sure is boisterous politics, and I love it!”.

Furthermore, if you’re in a debate and your opponent says a Nazi phrase, it’s fine to push back strongly. You are probably taken aback or aghast, but you can frown, or say “don’t say that!’ It’s not always enough to simply say “what do you mean by that?” or “that’s weird”.

If you stick to these principles, you’ll have a better shot at carrying out a debate without saying any Nazi stuff. Even if Nazi phrases are said, you’ll be able to deal with them effectively, and without any laughing.

Hope this is helpful. Thanks for reading.