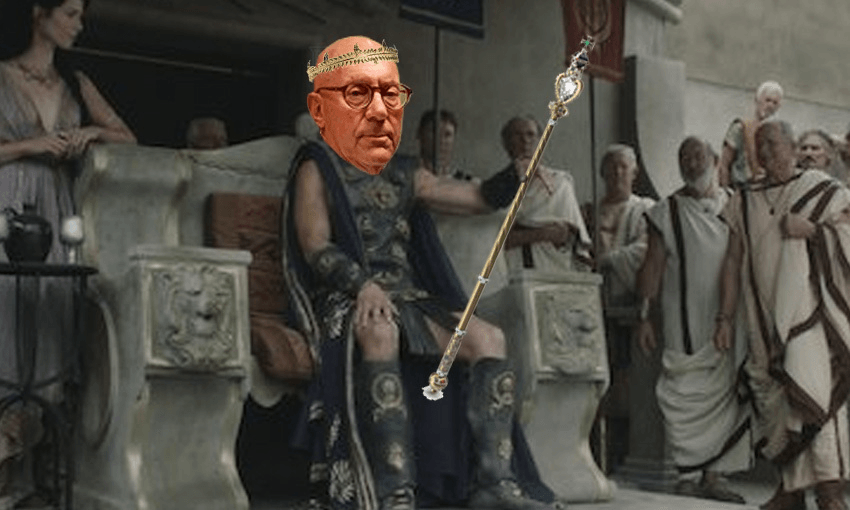 AN ARTIST’S IMPRESSION OF JIM BOULT

AN ARTIST’S IMPRESSION OF JIM BOULT

Queenstown is a microcosm of an idealised New Zealand. The epicentre of tourism, cradle of our national mythos, more recently a bolthole for the international elite, the small town on the edge of Lake Wakatipu is a jewel in the crown of New Zealand Incorporated.

But the social and economic ills which plague the country are felt most strongly here too. The housing crisis has pushed property prices to the highest in the country. Freedom campers have driven locals to the point of despair. Itinerant workers are sleeping eight to a room in dilapidated shitholes while they clean the mansions of the super rich. Mayor Jim Boult, running for his second term, believes he can fix all that – if only some people would come to the table and do what they’re told.

“I’ve had a lifetime in business and you get somewhere in business if you are tenacious and you push things through that you think need to be done,” he says. “I was elected by a landslide in 2016 because I think there was a view in the district that we needed stuff to be done, and we’ve done stuff. Sometimes that’s required me to be a bit bloody-minded.”

Nowhere is this more evident than in the brewing battle over a proposed expansion to Queenstown Airport, which would potentially double its capacity by 2045 by extending noise boundaries. The approach to the current runway is one of the most picturesque in the world. Planes fly in the shadow of the alps toward the base of the lake. Boult is totally opposed to expansion, favouring an extension in Wanaka – much to the chagrin of some in the township. Not everybody agrees with a halt on growth, but Boult, who led Christchurch Airport as chief executive through a terminal expansion and both earthquakes, says not everybody is informed.

“I don’t think there’s any other mayor in New Zealand who has got anything like the knowledge of running airports and the economics of airlines than I have. And yes, that probably does give me an advantage.”

Boult has an ambitious, 10-year, billion-dollar plan for the region, which is expected to have a larger permanent population than Dunedin by 2028. There are around 40,000 permanent residents in the district, with an average of 70,000 people a night. During peak periods there are up to 130,000. Already there are fears of a potential power black-out unless services are upgraded.

“It’s the most ambitious 10 year plan any council in our district has tabled, but there is a shortfall of $300-$400m, so where do we find that?”

Boult argues a visitor levy is the fairest and most effective way to plug the gap. A 5% levy applied to all accommodation providers including AirBnB would raise an estimated $22.5m, and Boult says international case studies show negligible impact on visitor numbers.

Hotelier Nik Kiddle, Boult’s most significant challenger for mayor, has written the accommodation levy off as “too blunt”, “heavy handed” and “overly simplistic”. Kiddle, who is running on a platform of “honesty and transparency”, argues that the levy would let central government off the hook for local infrastructure it should be funding.

Boult’s role on the board of Wayfare, a 65-year-old tourism operator formerly known as Real Journeys, is a conflict of interest, he says.

“Jim Boult is the chairman of one of the largest tourism operators in New Zealand, and his proposals deliberately exempt almost the entirety of that portfolio from additional tax liabilities. What I’m saying is that even if we get [just] the four big tourism operators – which includes his companies – to step up to the plate, it’s far fairer: [the] beneficiary pays.”

But the public, it seems, agrees with Boult. A referendum earlier this year showed 81% in favour of a levy with a 44% turnout. Any levy is technically a tax, and so central government has to agree, but Boult is confident they’ll come to the table. He’s had experience wrangling bureaucrats, he says.

“The buses here are run by the Otago Regional Council, but we had probably the dumbest public transport system in New Zealand before I instituted the $2 bus programme,” he says. “I mean, $16 return trips to get into town?

“I said to the ORC that if it was cheap enough and frequent enough then people would use it. If you make it good enough people will ride it. This council had to agree to underwrite it because ORC said they were nervous, and we took it on, and it’s gone like a rocket. In November 2017, the month before the programme began, 30,000 people a month rode on the buses. It’s now around 130,000. And as well as providing a way to get around the district, it’s much better for the environment.

“I had to kick and scratch and fight a bit to get there, but maybe that was the benign dictator kicking in.”

Kiddle sarcastically rephrases that characterisation to”‘benevolent dictator”. “[Boult’s] a businessman by training and he expects people to do what they’re told. But there’s a saying that when change is done to people, they resent it; when it’s done with people, they celebrate it. The mayor shouldn’t run council like a business, it’s about bringing people with you.”

There is an argument for assertive business acumen in Queenstown. The region is singularly dependent on tourism and the effects are felt most strongly here. The fortunes of tourism in Queenstown have a significant impact on the health of tourism in the country as a whole, Boult argues – if the Queenstown experience suffers a decline in quality, that will ripple out into the industry at large. Tourism’s image has soured in recent times, with questions around sustainability, growth, and ecological ethics plaguing the industry. It’s both a business and branding issue, Boult says.

“My personal view on growth going forward is that we’ve plateaued, and with the environmental and social issues going on around the world, I wouldn’t be surprised if we’re in for a pretty flat period. And so we need to move to a high-value model. If we turned tourism off tomorrow, town dies. So you know, that can’t happen. But we need to concentrate on value rather than numbers.”

At the end of the quarter ended June this year, bed nights in the town had increased 1.1% annualised, whereas spend increased 3.7% annualised, Boult says. “What that says is that numbers are pretty much staying where they are but the value was growing and that’s the direction I want to go in.”

But Boult’s business experience hasn’t been without its controversies. Around 300 itinerant workers will be evicted from the Lakeview camping ground in time for the election. They say they’ve been betrayed by a town that relies on them and many report facing homelessness. There has been criticism the move reeks of corporate callousness, with the site to be developed into a billion dollar mixed-use development, but Boult says the decision was made long before his time as mayor.

Boult was also a director of the doomed Stonewood Homes construction firm and resigned just three weeks before it and a number of connected companies collapsed in 2016 owing around $27m. Stonewood Homes was eventually bought by the Chow brothers, who own strip clubs, brothels and real estate in Auckland, for a bargain bin price.

In the lead-up to the 2016 election, Boult was subject to an orchestrated smear campaign when fellow contender Lyal Cocks approached journalists and public relations consultants with an offer of a job investigating Boult’s business dealings. The implication was that coverage of the Stonewood collapse would disqualify Boult in the eyes of the public should he refuse to stand down. A police investigation confirmed the existence of the campaign, but said it fell short of blackmail.

So why run again? Why leave huge sums on the table in the private sector if every campaign exposes Boult to allegations of corruption? Queenstown is growing, but it’s still a small place, and the drawcard is certainly not his office, which sits in a small room just above the Queenstown library, desk unadorned but for an apple and a model plane.

“My wife asks me that every day. I just decided I needed to pay back by putting something back into the community. There are times I think ‘Goodness me, I’d rather do something in business’, but most of the time of the time it’s the most satisfying thing I’ve ever done.”