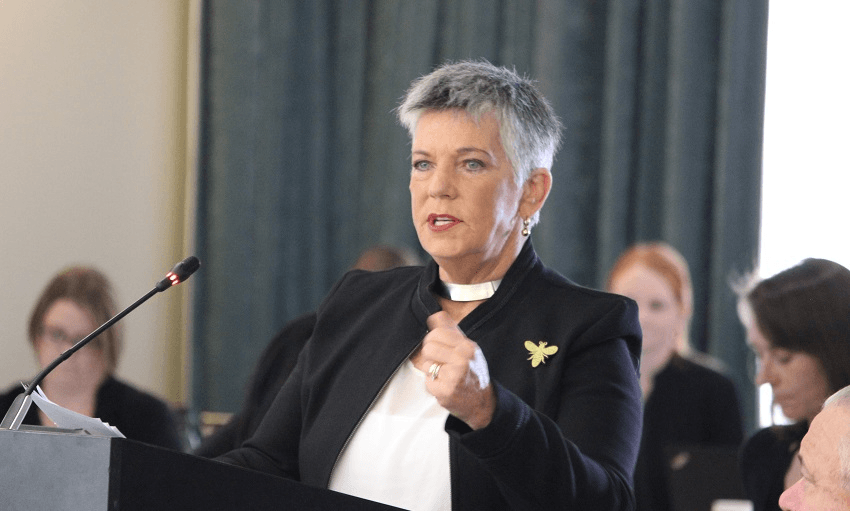 Penny Hulse made a call for collaboration and unity in the final meeting of her 27-year council career today. Will her plea be granted? Hayden Donnell delivers a grim assessment.

Penny Hulse got serious about halfway through her valedictory speech. She looked pointedly around the room. “I will go there, guys,” she said. “This A team, B team nonsense. You know, locals boards versus governing body. We all stand for office to be the very best representative of our community we can be, but those opportunities are being squandered with petty politics.”

The message didn’t seem to cut through. At the end of the speech, as everyone else in the room gave the retiring Waitakere councillor a standing ovation, self-proclaimed B team members John Watson and Mike Lee stayed stubbornly seated. Watson may have been confused. Lee looked sullen. When the council broke for lunch, he left the chamber without congratulating Hulse.

The pettiness wasn’t out-of-the-ordinary for Auckland Council. Its last term has been filled with infighting and bad blood. Councillors have loosely organised themselves into the aforementioned factions.The divide isn’t along party lines, with National members like Bill Cashmore and Linda Cooper broadly supporting mayor Phil Goff’s compact city agenda. Instead the rupture is more between progressives and conservatives, positive and negative, people whose main focus is enacting change and others who mainly want to stop it happening.

If this local election is anything to go by, Hulse’s plea for conciliation was probably in vain. Several of the city’s campaigns have been venomous, with splits emerging along similar pro and anti-change lines, as candidates try to harness ratepayer rage over controversial council projects. On the North Shore, sitting councillors Chris Darby and Richard Hills are facing hyper-negative opposition spearheaded by their opponents, Grant Gillon and Danielle Grant.

The pair’s More For The Shore platform could be summarised as “everything is terrible and these two are at fault.” The attacks have been many and varied. Lately, they’ve diverted into the vaguely hallucinatory. “Stop the MEGA rates rise,” one recent ad said. It wasn’t clear who was imposing the mega rates rise, or if it really existed. The message seemed designed to resonate with angry potential voters on a spiritual level, rather than a rational one.

In another case, a fake profile going by the name of a video game character and using a stock image as its profile picture has emerged to start a petition against the Takapuna town centre development.

The Shore is the worst, but it’s not the only poisonous election race. In Albert-Eden-Puketāpapa, Communities & Residents politicians have banded together with local golfers in an intense campaign to dislodge the councillors and local board members who want to divide the Chamberlain Park golf course. Signs around the suburb say “Stop the Next Chainsaw Massacre”, and feature crosses painted above trees on the course. A recent meeting hosted by the pro-golf course campaigners ended with people shouting “bullshit” and “do the bloody maths” at City Vision’s Graeme Easte.

There are more. Out west in Whau, Labour candidate Ross Clow is being challenged by his former ally Tracy Mulholland, who quit Labour and joined C&R after accusing Clow and other Labour members of bullying her into toeing the line. Her candidacy was encouraged by right-leaning Manurewa-Papakura councillor Daniel Newman, who has been effective at stymieing Goff over the last three years.

In Waitematā, Lee is running for a fourth term on what seems to be a platform of pure negativity. The 70-year-old had been considering retirement, but opted to run again because he thinks the supercity is “the worst thing that has ever happened to Auckland.” His candidacy could make things easier for Communities and Residents candidate Sarah Trotman, who was recently criticised for releasing a booklet saying the Waitematā Local Board was over budget by 40% this year. The claim is startling, but marred by the fact it isn’t true.

And in the mayoral race, John Tamihere, who recently said “sieg heil” at a debate, is trying to depose Phil Goff.

Back at council, Hulse was closing her speech. “There’s a huge amount of good around this table,” she said. “There’s absolute capacity in every single one of you to step away from some of the places you’ve been drawn into. I think to make Auckland the place that it deserves to be, and to get our staff the partners that they deserve, we need to step up to the plate and get on with partnering up with our mayor, with the Auckland community and getting the mahi done.” Once it was over, councillors Alf Filipaina and Linda Cooper put their arms around Hulse, and everyone sang ‘Tūtira Mai Ngā Iwi’.

It isn’t clear how the peace will last, though. Collaboration could be difficult if a large section of the next council gets elected on the back of campaigns laced with acrimony and anger. Partnering with fellow councillors could be awkward if you’ve spent the previous months saying they’ve been destroying the city.

That wasn’t Hulse’s concern anymore. She stepped off the stage, hugged her family, then stepped out of the council chamber for one of the last times. As the doors shut behind her, she probably experienced a mix of feelings. But one of them surely would’ve been a rush of relief.