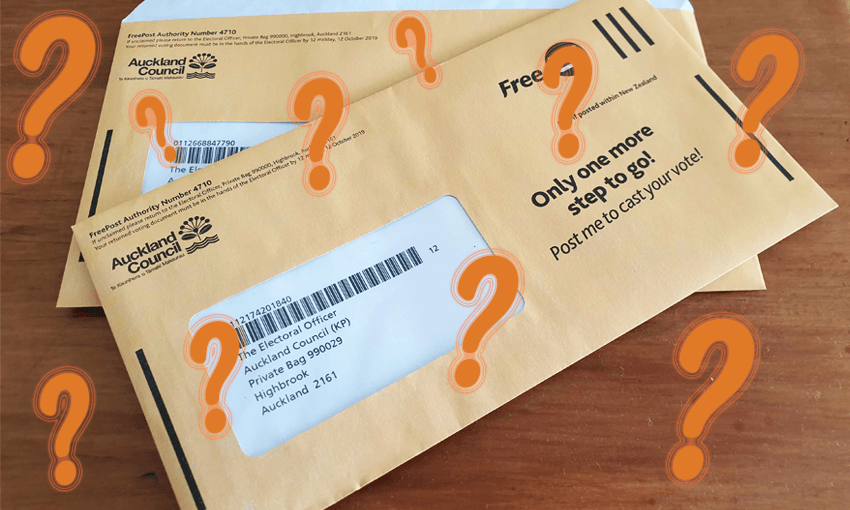 What are DHB elections and can we get rid of them? A Spinoff explainer

If you’ve ever voted in a local election, you’ll know the heady mix of confusion, boredom, and anger that comes from trying to fill out the DHB section of your ballot. Thankfully Julienne Molineaux is here with an explainer, and a plea for change.

What is a DHB?

DHBs are District Health Boards. There are twenty of them around the country and they provide publicly funded health services, including hospitals, in their district.

How are they part of local government?

They’re not. They’re part of central government but for convenience they hold their elections at the same time as the local elections.

Yes. They get their funding, policy directions, and targets from the Ministry of Health.

In addition to the elected DHB members, the Minister of Health appoints up to 4 members to each Board.

DHBs have dual accountabilities, and their accountability back to central government constrains their ability to respond to local needs or input.

How long have we had elections for DHBs?

Voting for the boards of local health services goes back a long way in New Zealand, to the 1909 Hospital and Charitable Aid Board, and before that for some hospitals in some parts of the country.

New Zealand is unique in having had elected health boards for so long. The only time we didn’t was a period in the 1990s when the then-National government decided to radically change the way our health services were organised. When the government changed in 1999, DHBs were created and the election of health board members recommenced.

This was partly a symbolic gesture – a clear rejection of the 1990s health policies, designed to soothe anxious and battle-weary health professionals and the public.

But there was also a genuine belief that community engagement is a good thing, with democratic boards more responsive to the communities they serve, and a good way to deliver population-based health outcomes.

Along with reinstating elected members, DHBs are required by law to consult with their communities, be open and transparent.

Are they open and community-focused?

DHBs are required by the New Zealand Public Health and Disability Act 2000 to have public meetings and consult on strategy, and to consult with Māori. But encouraging participation and openness is not a result of electing members so much as a legal requirement.

The Board has no direct democratic accountability to its voters. Some DHB members are reported as saying they are merely messengers of government policy, but when surveyed, most members felt they could manage dual accountability.

Does voting for DHB members make any difference to health outcomes?

Maybe not. A lot of things determine the success of a DHB and a lot of things determine whether you get the healthcare you need, when you need it, at a locality that suits you. One study of DHBs found that “The priorities and requirements of central government and the weight of institutional history were found to be the most influential factors on DHB decision-making practice.” The election of an individual DHB member isn’t likely to have a transformational effect on health service outcomes.

Is there a problem voting for DHB members?

One problem is many voters don’t know how their elected DHB members are performing. If we vote with little knowledge, isn’t the election a lottery?

Concern has been raised about whether elected Board members have the skills necessary to provide oversight and leadership of DHB finances and strategies and plans. They’re large organisations with large budgets and staff numbers – Auckland District Health Board, for example, has over 11,000 direct employees and an annual budget over $2b – and voters tend not to vote for people with management or finance backgrounds.

The voting public also tends to not vote for ‘minority’ candidates so Ministers use their appointments to ensure minimum Māori representation levels are met.

So what do I do with my ballot?

Remember it is STV – you need to number off the people standing. If you tick them your ballot will be disqualified. (Some Council areas use FPP for their elections so the tick/number thing has the potential to be confusing). You don’t need to number off every candidate, unless you definitely want someone to come last. Here’s a handy STV guide.

You can leave the DHB part of your ballot blank if you wish; that’s preferable to not posting your ballot because you get stuck on one part of it.

Are there any moves to get rid of DHB elections?

“The Panel has not formed a definite view on whether DHB elections are an effective or an essential way of achieving … effective avenues for [communities] guiding the direction of health service planning and delivery.”

The DHB model, though, might be in for a shake-up once the Review is completed in April next year.

Tell me what you really think…

When I cast my vote for my DHB elected members, I have no idea how much the Board has contributed to the experience I have of my local health services, compared to all the other factors that impact on that services (budget, government priorities, quality of management at hospital level, conflict between professions and departments within the DHB for resources etc). But more than that, I don’t know how the individual members of the Board have contributed to the Board’s performance. So I’m voting blind.

DHB elections are symbolic but perhaps not very meaningful. A more meaningful vote for the kind of healthcare I want is how I vote at general elections.