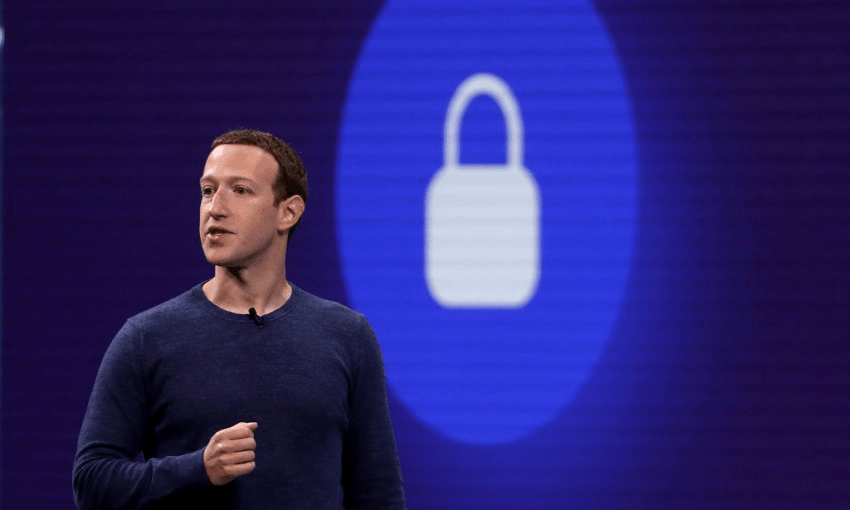 Facebook overlord Mark Zuckerberg with a padlock, which for the purposes of this article is both metaphorical and literal (Getty Images)

Facebook overlord Mark Zuckerberg with a padlock, which for the purposes of this article is both metaphorical and literal (Getty Images)

Should you delete your Facebook page? In many important ways it doesn’t matter what you decide, writes Sophie Bateman for Newshub.

In 2004, when college student Mark Zuckerberg launched thefacebook.com, he could hardly have known the global juggernaut his website would become.

Fast-forward to 2018 and Facebook is in the middle of its biggest ever crisis.

Last month it was revealed that up to 87 million users’ data was improperly shared with political consulting firm Cambridge Analytica, potentially affecting the outcomes of both the UK’s Brexit referendum and the 2016 US presidential election.

In the weeks since, more details about how Facebook operates have emerged. The company scans private messages, stores information about when and where its users have ever logged in, and can access everyone’s webcam and microphone.

Zuckerberg had to testify before US Congress, answering questions about his creation in a farcical hearing that launched a thousand memes. *cue robot blinking*

The backlash was swift. Shares plummeted, other tech CEOs condemned the network and the hashtag #deletefacebook began to circulate online – spearheaded by none other than Tesla’s Elon Musk. New Zealand’s Privacy Commissioner John Edwards has deleted his account, and says others should reconsider their own relationship with the site.

But is a move away from Facebook realistic? Or are our lives simply too entangled?

Dr Neal Curtis, media and communications lecturer at the University of Auckland, says it’s too late for anyone to consciously uncouple from the social media behemoth. Even if we delete our accounts, there’s no taking back the information most of us have freely given Facebook over the years. “Like that awful American band The Eagles say, ‘You can check out but you can never leave’,” he says.

“You can never, ever leave Facebook. You can close your account but you cannot leave. Facebook owns everything. You can’t delete any of that stuff, you can’t take it back. They’ve got you for life. People don’t know that.”

Too big to fail

Dr Curtis says he can see “troubling” parallels with the global financial crisis of 2008, when governments had no choice but to bail out the banks to avoid crippling society.

“They’re so big that they can do literally anything they want to, because the whole of society is beholden to them,” he says of social media corporations. “If we wanted to reform them or clip their wings a bit, we don’t have any power to do so. You can’t even get them to pay any tax.”

The Cambridge Analytica saga has proven the “impotence” of regulatory bodies when it comes to social media, raising questions about where contemporary power truly lies, he says.

Kathleen Kuehn, senior lecturer of media studies at Victoria University, says any rumours of Facebook’s demise are greatly exaggerated. “Facebook has 2.2 billion uses monthly, which is larger than the population of most large countries,” she says. “To suggest Facebook users are going to delete in mass I think is quite unlikely.”

She says there are simply too many consequences to leaving the site, both social and economic, for most people to make the move.

Ms Kuehn says even if we know how much data Facebook has on us, we’re likely to just accept it as the price we pay for a free service. “I think most people are quite aware of that trade-off, versus the privacy they feel is compromised or the data they’re giving up. They still see the social or economic benefits as greater than what they’re trading.”

Even knowing the alarming details about how Facebook operates, it seems we just don’t care that much.

Wanita Zoghby-Fourie, founder of New Zealand’s Social Media Conference, says the significance of the data breach may have gone over most people’s heads. “I think a lot of people are naïve and complacent about social media. When something like this happens, there’s a big uproar and then something else comes along.”

She thinks most New Zealanders have already forgotten that an estimated 63,724 Kiwis’ information was given to a shadowy British political consultancy. “People move forward. If this happens again, people will say, ‘Wow, do you remember the Cambridge Analytica thing?'”

Social media strategist Pauline Stockhausen agrees. She says it’s not a big deal for many people, “especially the younger generation”. “My son’s 19 and he couldn’t care less. If it affects them directly then they’ll take notice. If it doesn’t, they’re not going to.”

She argues that in 2018, social media is part of life and we don’t have much of a choice in the matter.

“Facebook’s been in our lives for so long now, what would happen if we didn’t have it? It would have to take something big for people to change the habits they’ve had over the last 10 years.”

But Paul Spain, CEO of Gorilla Tech, isn’t convinced that social media’s too big to fail.

“Facebook is already blocked in China. A society can get on just fine without these things, we had other mechanisms before. There are always alternatives. If Facebook were shut down out of a whole lot more countries, we would see something else spring up.”

However until that happens, it looks unlikely that anything will challenge the grip Facebook has on us. “There are other social media platforms being created with no advertising, but they’re so small they don’t have the clout to compete with the likes of Facebook,” says Ms Zoghby-Fourie.

Ello was launched in 2014 to much fanfare, but has faded from public consciousness. There’s also Diaspora, whose selling point is that you can retain your data without having to sign it over to a corporation.

Vero and Mastodon are both ad-free, meaning no data mining – but users may have to pay a subscription fee in future which will no doubt turn people off from a service they now expect for free.

The alternative: “boring as fuck”

Dr Curtis’ solution is a left-wing dream: a publicly funded, government-run social media. “We live in an age of transparency where everyone can see everything about us, but the companies that are developing that culture are completely non-transparent. What we need are companies that are publicly accountable.”

“We need to accept that social media offer a fantastic service, understand that and the problems that come with private corporations having unfettered access to all of that information. [We need] public media where it’s transparent how the information is being used, where the business model is not about making profit, it’s about funding through taxes.”

In response to the scandal, Facebook came out with a statement in April saying they’d let people know if their data had been accessed by Cambridge Analytica. They’ve also “dramatically” reduced the amount of information people can share with apps and will turn off access for apps that haven’t been used in three months.

While this might placate people for now, Mr Spain points out that from a site usage perspective, Facebook has been on a downward trajectory for years. In January it reported that its overall usage had dropped in the previous quarter by about 50 million hours a day – that’s roughly two minutes per user. Facebook also experienced its first drop in daily North American users after a controversial change to the News Feed algorithm.

But, cunningly, it branched out into Messenger as well as WhatsApp and Instagram, diversifying the business and ensuring it retains a massive number of users across its various apps and platforms.

“There have certainly been no signs of decline – whether that could become more dramatic comes down to how much attention media put on it and what other scandals are revealed,” Mr Spain reasons. “They can’t keep having these sorts of blunders and expect to come away unscathed.”

But while public trust in Facebook might be at an all-time low, the numbers simply don’t reflect that. Last quarter, Facebook grew its base of daily platform users by 2.18% – a slowdown compared to the previous quarter, but an increase nonetheless.

Even after everything we’ve learned, it seems that now we’ve got Facebook – and the good and bad that goes with it – we’re just not willing to let it go again.

We’re living in Zuckerberg’s world now, and it’s a mess of our own making.

This article was originally published on Newshub