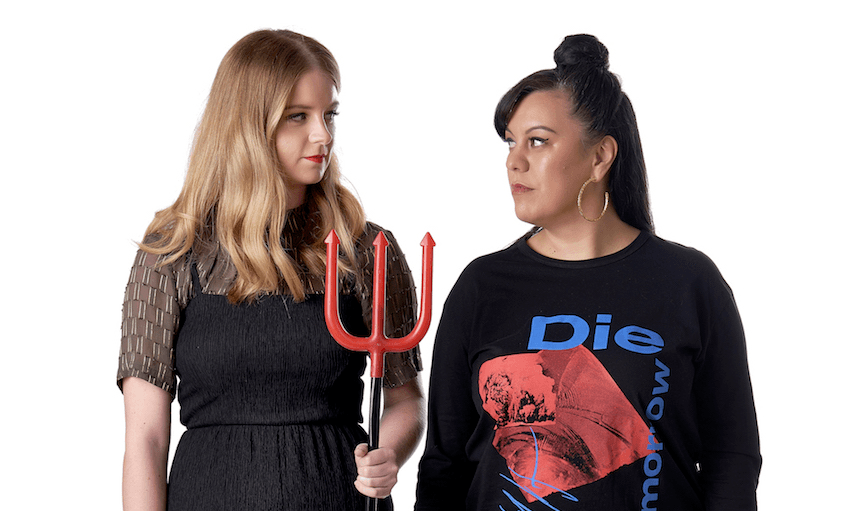 Huge and true: The Spinoff TV is coming to Three on June 22

Two years ago, we declared ‘Good news: TV is dead’. It turns out we were perhaps premature in that assessment.

In less than three weeks The Spinoff TV will hit all of your screens at once, arriving at 9.45pm into Three’s hallowed Friday night lineup, straight after 7 Days. We’ll do our best to approximate what we’ve done online, just on the television – gonzo reporting, scorching hot takes, ruthless media analysis, the best of our podcast lineup and more.

We’ve put together a dream team which is made up of both our people and our favourite outside collaborators to create a current affairs show in The Spinoff style. What that means is that we’ll attack the week as it comes at us, making video and releasing it on The Spinoff, Newshub and our social channels as it’s ready. Then we’ll pick the best of it, along with some exclusive content we’ve saved up, and head into Three’s studios on a Friday morning to package it up with our hosts.

A few hours later it will be on the television, thanks to our production partners at Great Southern Television, the team at Three and NZ on Air. (We can’t believe it either.) What follows is a list of the key on air talent, so you can start to get your head around what will be coming at you in a few weeks.

The first thing you see every Friday will be your hosts, The Spinoff’s very own Alex Casey and Leonie Hayden. Alex was the very first person employed at The Spinoff, and her furiously funny writing style is what built our audience and still defines us to this day. Leonie has been with us a year, after exiting her role as editor of Mana magazine to found The Spinoff Ātea, a dedicated Māori perspective at the heart of the site. The pair have honed their chemistry through their cult podcast On the Rag alongside Michele A’Court, and together will help make the show its own weird, unruly animal.

We put together a wish-list of people inside and out of The Spinoff who we wanted to make the show, and we got almost all of them. Let’s meet them:

The 2017 Billy T winning comedian will report and write for The Spinoff TV, bringing her truly unique sensibility to our little show.

The show’s director and beating heart, José will shoot, edit, write and when we’re lucky, appear on screen. This is his beautiful bouncing baby and you all must pat it on the head.

KFC fan and former New Zealand javelin champion Madeleine Chapman will write and review for the show, bringing to the show the kind of piercing insights that produced her smash hit analysis ‘NZ Politicians sitting down’.

Brings his universally beloved (even by Paula Bennett) series ‘Kiwis of Snapchat’ to the bigger screen.

Jamaine Ross, James Roque and Pax Assadi are Frickin Dangerous Bro, and will be providing a helpful guide to white culture.

Our news reporter, Rebecca Stevenson comes to us from running multiple papers in West Auckland, and will be busting down doors and bringing in scoops. If you see her coming, you probably have a problem.

Toby Manhire is the editor of The Spinoff and the host of the Gone By Lunchtime podcast. He used to edit the opinion pages of the Guardian in London, and write columns for the NZ Herald but has now used up all his opinions. Most recently he has been trying to do a good meme.

The savage YouTuber and comedian brings a second season of Repressed Memories, his deep, distressing dives back into New Zealand’s pop cultural past.

Coming via Sydney, with a stint at MTV and a smash short film under her belt, Lucy’s work is fresh and striking and she is far too good for us.

Adrian Stevanon is the producer of The Spinoff TV. Of Samoan/Swiss descent, Adrian’s job is to keep our talented band of content makers in line, and make sure that no bits of black go to air.

Carmen is our executive producer. With 30 years of telly making experience, she – alongside Duncan – is the boss.

Co-executive producer and The Spinoff’s managing editor, Duncan will also occasionally disgrace the screen as part of The Real Pod alongside Alex Casey and Jane Yee.

The Spinoff TV will air on Friday 22nd June, 9.45pm on Three