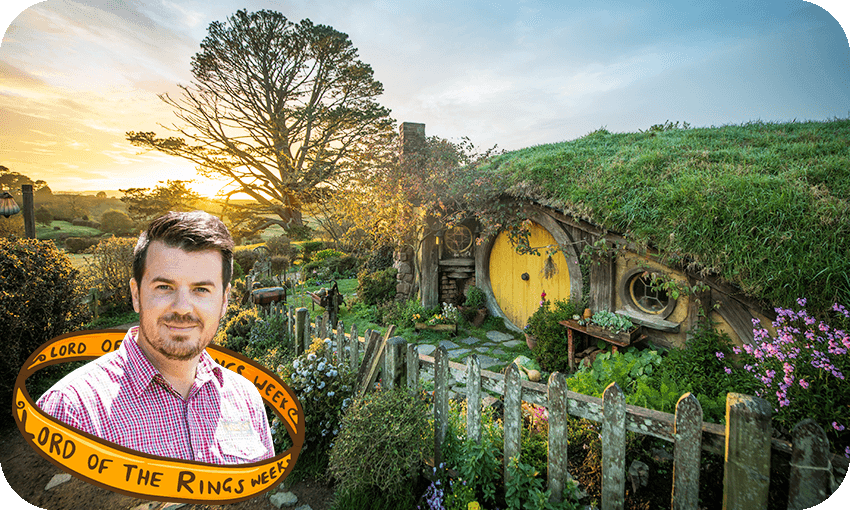 Tears and nosebleeds: At Hobbiton, they’ve seen it all

Plenty of Lord of the Rings superfans visit Hobbiton. Some are more excited than others.

At Hobbiton, your guided tour begins at “Gandalf’s Cutting”. In The Fellowship of the Ring, that’s the place where Frodo jumps on Gandalf’s cart, delighting young hobbits with an impromptu fireworks display. In Hobbiton, the Matamata tourist attraction where that scene and many others from The Lord of the Rings and The Hobbit trilogies were filmed, seeing it in real life can cause brains to fry.

Some visitors burst into tears. Others get on their hands and knees and kiss the ground. For many, it’s an overwhelming experience. “The Lord of the Rings and Hobbit stories have just been such a big part of their lives,” says Hobbiton CEO Shayne Forrest. “Arriving here … some of them feel like they’re home.”

One particular guest stands out from the others. “This is a guy who reads the books and watches the movies several times a year,” says Forrest. “He saw The Shire in front of him, the crown jewel, Bag End, up on the hills.” When he got to Gandalf’s Cutting, he couldn’t control his emotions. “He started hyperventilating … crying and kissing the ground.”

As his breathing got worse, staff attempted to calm him down. It didn’t work. “He ended up having a full-on nosebleed in the middle of Hobbiton,” says Forrest. But he wasn’t upset. Those were happy tears. “He had blood all down his face, all down his shirt, going, ‘This is the best day of my life.’”

“That,” says Forrest, “is the most excited person we’ve ever had out here.”

During his 10 years at Hobbiton, Forrest has seen plenty of fireworks. The Matamata attraction, which opened in 2002 but was rebuilt and rebranded when filming of The Hobbit finished in 2012, is among New Zealand’s biggest tourism drawcards, with pre-Covid visitor numbers peaking at 650,000 each year. As many as 85% come from overseas.

That’s 3,000 guests a day, a phenomenal number that requires plenty of infrastructure to cope. Among Hobbiton’s 320 staff are gardeners, landscapers, tour guides, props experts and hospitality staff. A bar, The Green Dragon Inn, modelled on that which appears in The Hobbit, is in operation, and brews its own themed beers. Opening hours have expanded to 8am-6.30pm, running seven days a week, with two-hour tours of Hobbiton’s 12 acres leaving every 10 minutes.

Numbers peak across the Christmas and New Year holiday, when bookings max out and 500 extra people show up every day, hoping to buy tickets despite Hobbiton’s website displaying a “sold out” sign. They could increase capacity, but don’t want to. “It’s all about maintaining the quality,” says Forrest.  “The easiest way to do that is [by] restricting the numbers so you have the peace and quiet of The Shire uninterrupted.”

All of that, though, stalled when Covid-19 arrived in Aotearoa. During lockdowns, with borders closed, Hobbiton’s numbers dwindled. Last year, just 90,000 people visited, resulting in staff and operation hours being cut back. “I’m not going to hide from it, things have been a lot different,” admits Forrest. He praises locals for keeping the experience alive, and says even those low numbers passed expectations. “We were quite humbled by the support of New Zealanders. A lot of people have always wanted to do it and are making the time to experience Hobbiton for themselves.”

Like many tourism operators, Forrest is hoping open borders see the return of international visitors next year. Yes, he’s also worried about the impact the loss of Amazon Prime Video’s upcoming Lord of the Rings series, which is moving overseas after just one season, may have. “It’s pretty disappointing season two is moving offshore,” he says. “What that’s going to look like long-term for the New Zealand brand, I’m not so sure.”

Many of Hobbiton’s visitors are Lord of the Rings and Hobbit experts paying pilgrimage to the defining film of their lives. “They can point to any spot and say what was said there, by who,” he says. Forrest, and his tour guides, are fans themselves. He started work at Hobbiton as beverages manager, working his way up to CEO. “I thought I’d work there a couple of years, and here I am 10 years later,” he says. “I love the place.”

Does he ever get sick of hobbits, elves and goblins? Never. He watches The Fellowship of the Ring whenever he travels, has just started reading the books to his kids, and makes his family binge the box sets regularly at home. “When I put on the movie, my wife says, ‘Are we really going to watch this again?'”

But even he can be thrown by some of the requests he receives. One guest paid for a tour, but didn’t want to go on it. Instead, “He just wanted to relax in Hobbiton.” For an entire day, a punter sat at the base of the Party Tree, reading his book. “At the end of the day we said, ‘Mate, you do need to leave. Do you need a ride? He said, ‘No, I’m off on my next adventure.’ We never saw him again.”

Actors from the films sometimes show up to surprise guests. Billy Boyd and Dominic Monaghan, who played Merry and Pippin, spent a day serving drinks behind the bar, denying they were who everyone thought they were. Other visitors are even naughtier: one customer snuck into a hobbit hole and spent a night there, sleeping in the dirt. “I don’t believe it would have been a comfortable sleep but he would have gone away with a great story,” says Forrest. The incident saw round-the-clock security measures installed.

Forrest has his own hobbit hole. When pushed, he admits it’s his job’s biggest perk. Out in Hobbiton, Forrest has picked himself a peaceful place he can escape to when things get too much. “It’s on the very edge of The Shire,” he says. It has a red deck and orange door, and overlooks a pond. Guests only see it in the distance, meaning Forrest can, and does, take the occasional nap – just like a real hobbit. “It’s a good spot for when you need some ‘me’ time.”