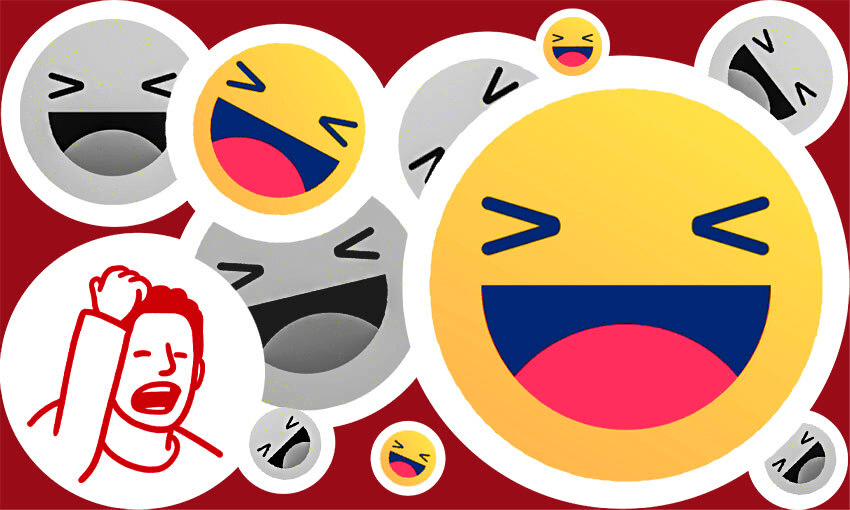 Facebook’s haha reaction was developed to enable users to express laughter, but it has turned into the emoji of ridicule and scorn.

The haha emoji is poisoning Facebook. Created 11 years ago to express laughter, the emoji – officially dubbed Grinning Squinting Face – has become the emoji of ridicule. Every time I see that little yellow ball of derision sitting at the bottom of news stories and posts, cackling at the pandemic, climate change, inequality – actually anything where someone is trying to make the world a better place – my faith in humanity slips a little further.

While I’m training myself not to click on Facebook’s comments section – and that addictive rush of outrage of reading the horrendous views of strangers – the haha emoji is unavoidable. It takes just one person to click that avatar of vitriol and the post and my newsfeed is tainted forever. Even on stories where the comments are turned off, you’ll still find that little androgynous face of scorn.

My experience of social media is now like being followed everywhere by Nelson Muntz from The Simpsons – like every earnest view I hold is a source of belittlement for the world.

In a way it has become the emoji of the moment. The emoji of Brexit, Donald Trump and the anti-vaxxers. A weapon of the trolls in the time of the culture wars.

The haha emoji started its life as the innocuous emoticon, XD, during a simpler time where lol, :) and MSN messenger were at the forefront of online communication. The emoji itself was developed in Japan and in 2010 was part of the first great global emoji cache known as Unicode 6.0 – a worldwide emoji standard, sometimes called the UN for emojis.

But Grinning Squinting Face soon fell into the shadow of its cousin, Tears of Joy emoji, another Unicode 6.0 alumnus, and part of the first batch of emojis available on iPhone. By 2015, Tears of Joy had changed the world’s communication and was named Oxford Dictionaries’ word of the year, the first time an emoji has taken the title. Interestingly, “post-truth” won the following year.

But not everyone was besotted with Tears of Joy. In 2016, Guardian columnist Abi Wilkinson called it an “obnoxious, chortling little yellow dickhead”.

“There’s something about this particular character – with its broad, cackling grin and the performatively prominent tears of mirth – that just feels inherently mocking and cruel,” Wilkinson said.

It wasn’t just the design that produced such a visceral reaction in Wilkinson, but how it was used – it could be found in comments on stories about refugees who drowned at sea and articles on the rise of hate crime in post-Brexit Britain. The emoji wasn’t being used to express joy, but hate. As she saw it, Tears of Joy had become a weapon of the right in the culture wars.

“When I look at its yellow face, I see the detestable, carefree smirks of Nigel Farage and Boris Johnson as they merrily dance through the current chaos – hop, skip and jumping over the cracks in society they’ve helped drive deeper and wider, safe in the knowledge they’ll personally be just fine no matter what.”

An Irish Times columnist called Tears of Joy “more beastly than any other [emoji]” and a “sobbing cretin popular with right-wing bullies and those with no imagination”.

But Tears of Joy soon took a backseat – 2016 was the year of the arguably more divisive Grinning Squinting Face. That year, Facebook made a momentous decision. The “like” –  the big blue thumbs up that had become a symbol of the social media platform – would be expanded to include a sweet of emojis: love, wow, sad, angry… and “haha”. Those bullies were gifted a new and more powerful tool.

As people were given more ways to express their views on Facebook, it soon became clear that, as journalist Daniel Walters wrote, the haha emoji is “an A-hole”. Walters said, rather than laughter, the emoji had been “pressed into service for a more sinister purpose: Derisive mockery of sincere statements”.

“Make no mistake, Facebook’s laughing face emoji is laughing at you, and it’s doing so in a way far more infuriating than simply a written-out ‘ha ha’ or ‘lol’.”

The sneering contempt of Grinning Squinty was used to belittle millions around the world. A journalist writing on Medium said the emoji had even been used to discredit victims of sexual abuse in India and the #MeToo movement.

“How do you expect women to come forward and report such crimes? It is one thing to not believe them. But it is worse when you laugh at them, mock them and reduce their self-worth to nothingness.”

This year, a Bangladeshi cleric actually issued a fatwa on the haha emoji, telling his 3 million followers that “if your reaction was intended to mock or ridicule people who posted or made comments on social media, it’s totally forbidden in Islam”.

There is also something about Grinning Squinting Face that seems objectively worse than Tears of Joy – the aggressive eyebrows angling forward and the slightly tilted back head, looking down on you. While most descriptions of the emoji say it is used to convey laughter, one definition gets closer to its true meaning: “Verb: Treat with ridicule or scorn; deride, mock, laugh, sneer”.

Elevating Grinning Squinty to the status of Facebook reaction has also given the “A-hole” emoji outsized power. The reactions at the bottom of the post are not weighted to represent the number of people who click on a certain reaction. A single click on Grinning Squinty and it’s anchored to a post and an ocean of hearts and likes can’t wash it away. In a global pandemic, when social media feels more toxic and divisive than ever, this has made Facebook feel even more like the home of sneering bullies.

But do we want social media to be forever polluted with this sneering face of contempt and division? After five years, there seems to be only one solution. Just like Lonely lingerie, Charlie Chaplin and all musicals, it’s time to cancel the haha emoji. Bring back the like and the lol if we must, but Grinning Squinting Face must be excommunicated from Facebook and purged from our newsfeeds forever.

Although I know which emoji I’ll see when this story pops up on Facebook.