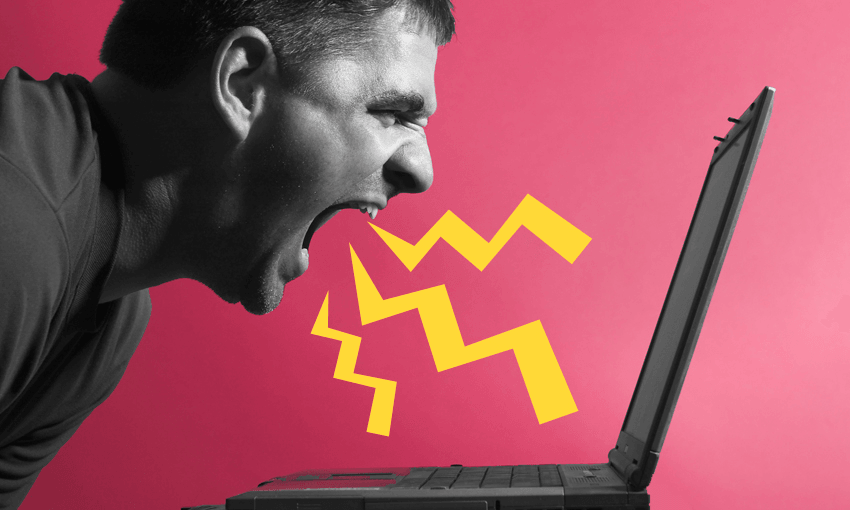 Australian media can now be sued for comments left on their Facebook posts. Could it happen here?

In a shock decision, Australian courts have ruled that media organisations are legally liable for defamatory comments left under their social media posts. Hal Crawford explains what it means for media on both sides of the Tasman.

This week the High Court of Australia decided that news organisations are legally responsible for the comments other people make on their posts on Facebook. The decision sent a little shock wave around the world: not only does it harm the media’s ability to use social media to generate traffic, it has serious implications for anyone who posts anything on social media. That’s a lot of people.

This case has been banging around the traps for years. The story begins with a 2016 expose of shocking treatment of prisoners in a Darwin youth prison. Footage shows one of the young inmates, Dylan Voller, strapped in a chair with a bag on his head. Many news stories about the case are written, and these stories are posted by news organisations to Facebook. On some of these posts, Facebook users make allegedly defamatory comments about Voller. Voller and lawyers decide to sue: the twist is that they go for the news organisations rather than the people who actually made the comments. Voller and team do not give notice so the organisations can take the comments down. They go all in, and they go for the people with the money.

Nasty, but beside the point

The thing about defamation cases is that you always get curious about what was actually said. You know, the bad stuff. As humans, we can’t help it: what words caused an underage felon to lawyer up and battle through appeals to the highest court in the land? Presumably my curiosity is contradictory to the purpose of the suit. That is often the case with defamation, and it’s not the point here. Whether or not the comments are actually defamatory is yet to be determined, a matter for another court case and perhaps several hundred thousand dollars more in legal fees.

Here the issue is whether the news organisations can be held responsible for what other people append to their social media posts.

I’ve spoken to a couple of level-headed MOPs (members of the public) about this, and they welcomed the decision. “I hate comments”, is the general take, and “anything that discourages horrible comments is good”. This is not my view. By my reading of the decision, responsibility for comments could easily extend beyond news media to business, charities, and indeed anyone posting material on social media.

I first became aware of the Voller case around 2019. I was working in the Newshub newsroom and when the first first ruling came down we were deeply concerned that the Australian precedent could spread to New Zealand. At that time, Facebook page admins could not disable comments on a particular post. You had to pick up nasty comments after they had gone up, or use a shonky workaround where you filtered out problematic words in a bid to prevent comments with those words appearing. Even with the resources of a big New Zealand newsroom, we had nowhere near enough people to moderate everything. We ended up avoiding posting stories we thought would invite potentially defamatory comments. All the time, I thought a higher court would step in and prevent a poor decision from being made law.

The High Court decision runs to 71 pages. I was expecting it to be a chore to read. Instead, I was taken on a ride through a strange and frightening world. In this world, events of 150 years ago appear as if they were yesterday, innocent servants are taken to court for delivering packages, racy poems are stuck to golf club notice boards, and pretty much everyone is on the hook for everyone else’s offended honour. You’ve got to hand it to defamation law in Australia: it’s a broad and rambunctious church.

The Australian High Court has seven members, and the Voller decision was not unanimous. The justices were split five-two. I did some analysis and it turns out the dissenters were the youngest members of the court, with an average age of 50. The average age of the majority judges was 62. I don’t believe this is unrelated to the outcome.

I was also gobsmacked to discover that one of the dissenters, the youngest member of the High Court, was my friend’s little brother. I hadn’t been keeping up. I remember him being pretty annoying. Justice Edelman’s dissent was magisterial and well-argued, and found that because people can make comments entirely unrelated to the original post, it is wrong to have a blanket rule that makes the original poster the “publisher” of all comments.

Don’t be happy, be afraid

The Australian High Court doesn’t have jurisdiction in New Zealand, but its approach may be influential. In the decision itself there is reference to a New Zealand case from 2014 – dismissed by the Australians with the legal equivalent of an eye-roll – and the similar legal system means that while no precedent has been set, it may be referenced in NZ courts.

In March of this year, Facebook introduced a feature where you can turn off almost all comments on posts. While this allows news publishers (and anyone else) to avoid most legal problems, it also significantly reduces the potential reach of those posts. Comments are signals to the Facebook algorithm of worthy content, and result in the post being shown to more people.

Probably more important is the potential application of the principle of commenting responsibility beyond news, to influencers, politicians, and anyone who posts on social media with the intention of drawing attention to themselves. Certainly in Australia, whether posters are aware of the nasty comment or not, they are on the hook. To quote from the High Court majority:

“A publisher’s liability does not depend upon their knowledge of the defamatory matter which is being communicated or their intention to communicate it.”

In closing, your honour

I don’t want to exaggerate the risk here. The Australian government is in the middle of a process of reviewing defamation law that will examine social media comments and hopefully restore the balance. The issue in the Voller case is muddied by the fact that the defendants are all news publishers, but there’s nothing in the High Court judgment that limits responsibility for comments to the media. Defamation law is broad and while there are plenty of defences, merely being the target of a claim is horribly expensive in both Australia and New Zealand. After this decision, reform is needed, and fast.