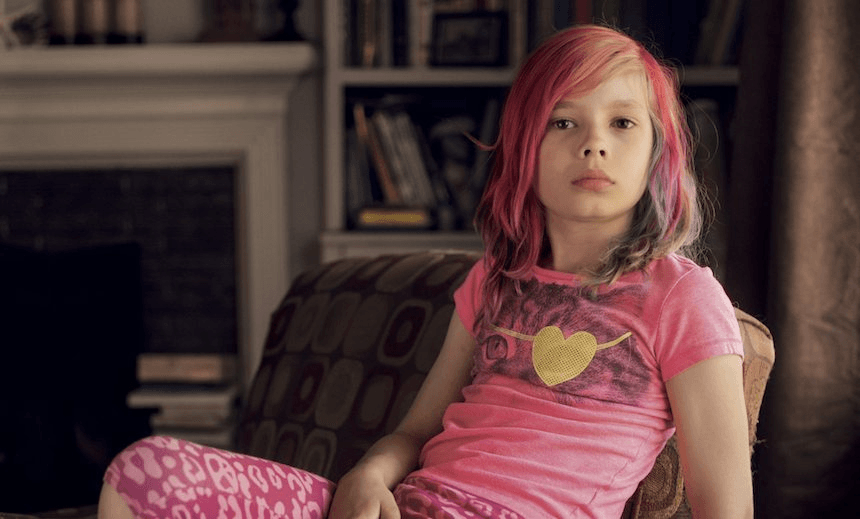 By Adrian Hatwell
Guest writer
Made possible by

In January National Geographic, the venerable publication of geography, history and culture, achieved a milestone: the Gender Revolution special issue marked the first time a transgender person had featured on its cover. Adrian Hatwell talks to the photographer behind the cover, New Zealander Robin Hammond.

When National Geographic‘s January 2017 issue went on sale late last year, the magazine joined the small handful of mainstream publications to ever feature a transgender model on their cover. Nat Geo‘s cover was probably the most radical of the bunch, featuring a pink-bedecked nine-year-old girl named Avery, living openly as a transgender person in the US.

Not typically regarded as a publication to rock boats other than the most literal kind, National Geographic received an unprecedented response to the cover image. On one side there was cheering and admiration from those who saw the depiction as a brave and necessary step in advancing diversity of representation in the media. On the other, the all too predictable wave of vitriol that decried the photo as evidence of mental illness, religious impropriety, and child abuse. The split was more or less right down the middle.

The photojournalist who shot the portrait, New Zealand-born Robin Hammond, is no stranger to charged subject matter. Over his distinguished career he’s covered the likes of mental illness crisis in developing nations, LGBTI communities living under oppressive regimes, and the experience of refugees building new lives in Europe. These long-form explorations of challenging social issues have required the photographer to develop a thick skin, so he’s not a ‘don’t read the comments’ kind of guy. In fact, Hammond has managed to find a kind of value in the parade of negative reactions to his portrait of young Avery.

“On one hand, it made me sad to hear that stuff. On the other, I think for many of us who move and work in circles that try very hard to be accepting of diversity, it’s really good to be reminded there are a big chunk of people who aren’t part of that world. We see this with things like Brexit and Trump.

“A lot of us, including myself, are very rarely exposed to the other side. I think it’s a really good reminder to those of us in my bubble of the work that needs to be done.”

The magazine feature from which Avery’s portrait comes was a massive undertaking that saw the photographer travel to diverse communities from eight different countries — including townships in Gaza; rural villages in Kenya; and a Native American reservation in the US — to interview and photograph nine-year-old children. The photo essay and article, entitled ‘I Am Nine’, compiled the kids’ responses to simple questions about gender: What is the best thing about being a girl? What would be different if you were a boy? What makes you happy? Hammond began the assignment the previous summer while visiting family in New Zealand. He took advantage of his sister-in-law’s schoolteacher status to round up some Kiwi kids and give his interview questions a test run.

Avery was one of 80 children Hammond eventually talked to in order to get the most varied responses possible. He says he found her to be as typical as any of the other children he worked with.

“I’ve done a lot of work on LGBTI rights, so when I met Avery, it wasn’t a big, life-changing moment at all. She was totally a girl, and the interaction with her was totally about her and her girlhood. But, to be honest, I didn’t really think too much about it.”

While he hadn’t set out to make a huge impact in shooting Avery, the photographer is extremely proud of the image and was glad National Geographic saw the portrait for what it could be, and took the risk they did in pushing it out to the world.

“You do a story about kids around the world, and you put a nine-year-old transgender girl from the US on the cover — especially with this new administration in the US, a lot of LGBTI people are particularly vulnerable — I think that’s a bold statement, and I think it is the right thing to do.”

In spite of the toxicity of the backlash the Gender Revolution cover has generated, Hammond says he’s taken heart from the positive responses. He’s been particularly touched by the reaction from Avery’s family, who have become huge advocates for the rights of transgender children around the world since their daughter began living as an openly transgender girl at the age of five. For them, and for advocates everywhere, having a strong, proud transgender portrait on a magazine with such reach is a significant victory.

“They have been fighting for so long to try and get transgender kids recognised in schools,” Hammond explains. “There’s this massive divide in America about LGBTI rights and LGBTI kids are not recognised for who they are. For me, the denial of something so fundamental to someone’s identity, it’s prejudice at its worst. It’s like a denial of their existence.”

Many schools in the US are hostile environments for LGBTI students, with resources and curriculum purposely absent any discussion of the rights and realities of LGBTI people. What many of these schools do have, however, are subscriptions to National Geographic. Hammond has been contacted by grateful teachers who are thrilled to be able to supply students with literature that affirms who they are.

“For little kids that age, where their world is their community and their school, that might be the first time they can recognise, ‘Here is someone like me’,” says the photographer. “To have that on the cover of National Geographic is pretty cool.”

To Hammond, this is the real work of a visual storyteller; to tell the stories that aren’t being told and shift people’s ideas. His target audience is neither those who already agree with him, nor those who are too stuck in their beliefs to change. He’s after the mass that sits in the middle — the confused, the undecided, the disinterested. Each time a story is put out about a transgender person simply being a normal part of the community is another opportunity to bring some of those people over to the side of acceptance.

“We’ve seen this in New Zealand,” he recalls. “When I was a kid going to school, the homophobia was just horrendous. But it was totally normalised. When I was in high school I wouldn’t have known a single kid to have come out, let alone a transgender kid.

“I look at my own family, the attitudes of my parents have shifted massively. I think what that is about, whether it be through photography or film or what they read or even personal interactions, is just being exposed to narratives, other than that homophobic narrative they carried in their head that they were taught when they were kids.”

Hammond says he may be naive to believe photographers and journalists can change the world, but the school children who have finally found something that reflects their own experience in that bold portrait of Avery would surely disagree. And it’s not a sentiment the photographer takes to heart either, if his unwavering energy to the cause is any indication.

Since finishing the Gender Revolution work he has travelled to Jamaica and Tunisia to seek out the LGBTI communities that live in hiding within those hostile societies. This is part of his ongoing Where Love is Illegal project, telling the stories of those impacted by bigotry, fear, and abuse around the globe. Next, he’s setting his sights on the US, where transgender people of colour make up the nation’s highest murder rate and the majority of homeless youth are from the LGBTI community.

“There’s still a long way to go, it’s such a divided society, and a lot of LGBTI people get caught up in that divide, and have difficult times as a result. I think now, more than ever, it’s important that their voices are heard.”