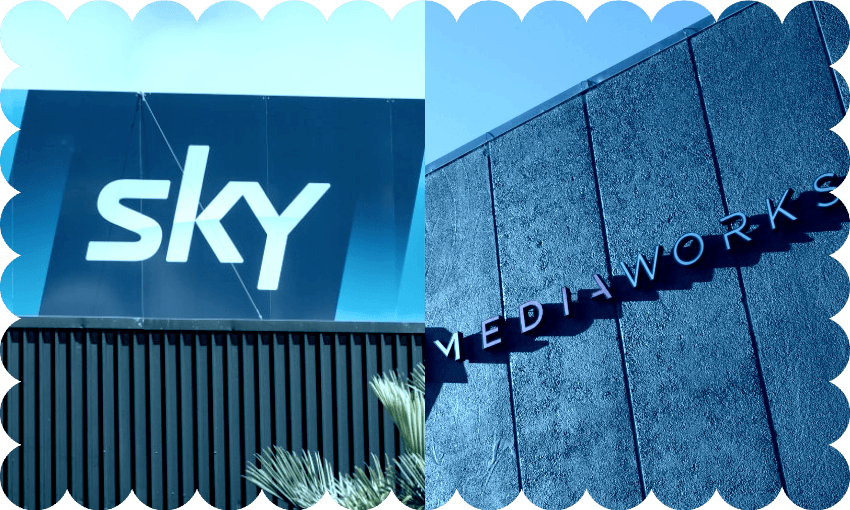 Last Tuesday our biggest TV company was about to buy a radio and outdoor advertising giant. Yesterday that dream died. Duncan Greive explains what happened.

Just over a week ago I was typing on this same laptop about the smouldering potential of a tie-up between pay TV colossus Sky and the radio and outdoor giant MediaWorks. Last night, just as TVNZ was entertaining advertisers at the launch of its rebranded streaming service, phones lit up with the news that the deal between Sky and MediaWorks was not happening.

“Just letting you know that we’ve made the decision this evening to not proceed with negotiations on the potential MediaWorks acquisition,” a very short email from Sky’s comms read. “We’re advising shareholders of the decision now, and I wanted to let you know directly too.”

It is a lot to take in. The Sky-MediaWorks deal had the appearance of the biggest media transaction in New Zealand since Sinead Boucher bought Stuff for $1 at the apex of the first wave of the pandemic. It involved Sky, by some financial metrics our largest media company, buying MediaWorks, a very serious player in two of the most stubbornly cockroach-like categories in media: radio and out-of-home (essentially, billboards). After a decade in which major media consolidation tended to take for ever before being blocked by the Commerce Commission (see: NZME and Stuff; Sky and Vodafone), this felt like the kind of consolidation the industry had been seeking for years.

Hadn’t they only just started talking?

It is very abrupt. Sky had been courting MediaWorks for months before news leaked to the Australian Financial Review, a business newspaper known for being a reliable location to leak to when a transaction is dragging its feet. While MediaWorks is (reluctantly) owned by private equity, Sky is publicly traded on the NZ stock exchange, which meant Sky’s owners gave their verdict very quickly.

The market didn’t like what was being proposed, sending shares down as soon as the deal became widely known. Analysts thought Sky shouldn’t be spending money, and should instead be returning any cash to its shareholders in the form of dividends.

Under normal circumstances, yes. But these are increasingly strange times we’re living in. The current high inflation we’re experiencing has central banks raising interest rates to get it under control. This means they’re making borrowing money more expensive, which in turn makes having money in the first place more enticing. Sky has a lot of money in the bank, so much that it could buy MediaWorks pretty easily. Unfortunately those who own Sky shares had other plans for that money. Like taking it themselves.

Sky can be viewed as a counter-cyclical business, meaning people use it more when times are hard. During the last recession, way back in 2008-2010, people stayed in and watched Sky, instead of going out and spending money on clothes or restaurants. MediaWorks, which makes almost all its money from advertising, is a regular old cyclical business. It makes money from advertising, which people buy more of when people are also buying clothes or eating at restaurants. So because there is more and more fear of a recession, a business like MediaWorks is suddenly viewed as a lot more shaky than one like Sky.

Is this kind of like what’s going on with Twitter? And something to do with the bear market?

Yes. Elon Musk agreed to buy Twitter (which is also, at the moment, an advertising-driven business), way back in the mists of April 2022. He currently spends most waking hours seemingly trying to back out that deal, because if he were walking into the giant business store right now he could buy Twitter for far less than the price he agreed to a couple of months ago.

This might be seen as a version of that – Sky being interested in buying MediaWorks at one point in time, and being less excited a bit (read: a week) later, when circumstances have changed. So the deal collapsing is not necessarily about MediaWorks or Sky so much as it’s about the global economic outlook, which is extremely stormy. Russia’s war on Ukraine, spiking oil prices, the crash in crypto and the bear market are all connected, and all played a part in sinking this deal.

How does it impact Sky and MediaWorks?

The deal falling over is most disappointing for the two people running the organisations. Each has been in their roles for a limited period of time and is looking to make a mark. For Sky’s Sophie Moloney this was an opportunity to scale and diversify the business and give it a different stake in its home market. For MediaWorks’ Cam Wallace it represented an opportunity to finish the endless saga of its owner’s reluctant role in New Zealand’s media market and move on to a different leadership role somewhere else.

Now each is somewhat chastened. Moloney has to face up to the fact the conservative investors who ultimately own Sky want different things to what she and her staff do, meaning change might have to come more incrementally. Wallace might have to stick around a little longer to see through the transformation and sale of MediaWorks, which was only 18 months ago still tied up with Three.

The deal might feel dead, but it’s not. Bear markets and recessions often push owners to sell things for less than they might have thought they were worth a few months earlier. It might be that MediaWorks’ owners will take another deal later in the year. Or that another buyer – Stuff, perhaps? – might still emerge.

The thing that has not changed is that New Zealand has a bizarrely fragmented media market. We have a similar number of scale players as Australia, with a fifth the population. At the same time, the demands for investment are huge – all of us would prefer to have more stuff to sell, and better technology underpinning what we do, for example. All of which would be much more easily accomplished spread across fewer entities.

So while this particular deal is dead, the need for mergers and acquisitions remains very present (that much is clear from the government’s still urgent desire to get RNZ and TVNZ together). What this means is that for people who work in or consume media (ie, all of us) this deal might be finished – but there is no doubt that something else will replace it.