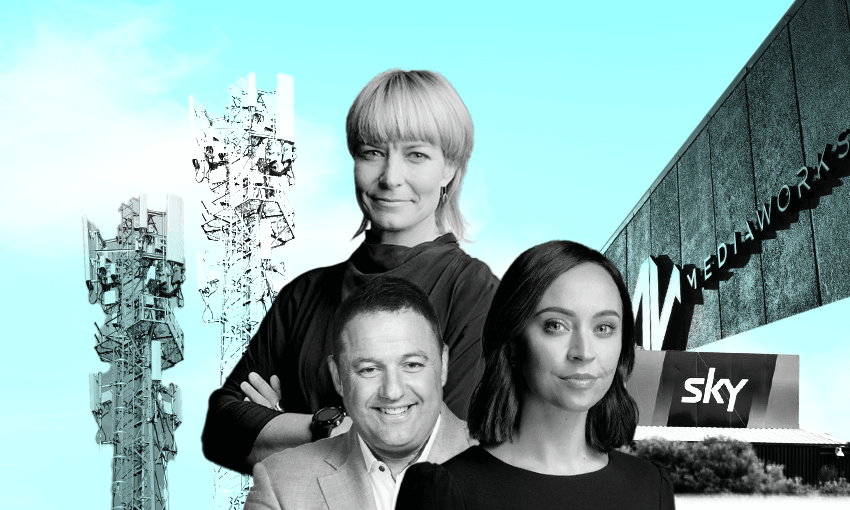 It’s merger season in New Zealand media, with Sky now in advanced talks to buy MediaWorks. Duncan Greive breaks down its impact on the market and audiences.

New Zealand’s pay TV giant Sky has confirmed this morning that it is in advanced discussions with the owners of MediaWorks, owners of radio stations like Today and The Rock, along with a large number of billboards and other out of home advertising sites. The move would combine two of our biggest media companies into one giant stretching into many areas of the traditional media sphere. It would have huge subscription revenues through Sky, as well as formidable advertising sales strengths through MediaWorks, and while it would require Commerce Commission approval to go through, that would appear to be little more than a formality.

Talks appear to be well-advanced, with major investment banks appointed to broker the deal, and a clearly energised Tova O’Brien talking up its prospects on Today FM this morning. The former Newshub political editor is part of a raft of former Three stars which make up the lineup on the new talk radio brand, and will be part of intriguing potential opportunities viewed by Sky’s newish CEO Sophie Moloney. Because there is almost no direct competition between Sky TV and MediaWorks, almost all of the business logic for the deal involves what they might do together.

New Zealand is a relative outlier in not having at least one 24-hour news channel. The obvious counter is that as a nation of around five million people, we don’t have the scale to sustain one. Yet in Today FM MediaWorks already has a lineup with heavy experience of live television – from O’Brien at breakfast, to Duncan Garner in the mornings to his former AM Show co-host Mark Richardson in the afternoon and Lloyd Burr during drive.

It would be relatively easy to fill out a primetime roster and rig the studios for video as well as audio, and while production values might be limited, as RNZ’s Checkpoint shows, even a small audience can capture outsize influence when amplified through social media, particularly during major news events.

Alternatively, shows like O’Brien’s and Burr’s could be funnelled into a revitalised Prime, the free-to-air channel which has been largely neglected in recent years. Regardless of how they play the talent, it would inevitably give Sky much greater local star power, which can be very helpful when courting advertisers.

Perhaps the most powerful synergy between the two organisations is the combination of Sky’s massive and relatively stable subscription revenues through its satellite TV and SVOD services, with MediaWorks’ huge sales operation, spread across radio and outdoor advertising. Sky brought in just $45m in advertising revenue, per its most-recent annual report, which is tiny compared to the likes of TVNZ and Discovery. This is in large part because its business focus has always been the subscription revenue it gains through satellite TV and services like Neon and Sky Sport Now.

MediaWorks derives almost all of its income through ad sales, and its staff would doubtless welcome the opportunity to sell the vast and diversified channel lineup of Sky. The long tail of channels targeting different demographics also maps well to MediaWorks’ existing inventory, making integration easier than it might otherwise have been.

The big story of 2022 has been the bumpy ride for streaming platforms, most notably Netflix, which has suffered a two-third decline in stock price this year. Part of its solution has been to announce a cheaper ad-supported tier, in an attempt to grow the number of households which access its service. This opportunity exists for Neon too, which is a relatively pricey streaming service – an ad-supported version might be able to grow Sky’s subscription revenues while also opening up a younger and more covetable audience to advertisers.

One thing Sky will be eyeing is all that inventory. Between its radio stations and out-of-home sites, MediaWorks has a vast amount of ad spaces available. Its plan is to sell as much as possible, but invariably there are slots which go unsold. Sky has historically been one of our most significant advertisers, and if it were able to purchase any unsold inventory at discounted internal rates it would have an outsize presence in front of the New Zealand public, without having to pay market rate.

If it goes through – and there is a sense that the deal is well-advanced – then it would represent an end to the epic saga of MediaWorks’ majority owner Oaktree’s relationship with New Zealand’s media. It has been here for more than a decade, and Sky got close to buying MediaWorks in 2015 for more than twice what it is likely to pay now (likely between $150m-$200m – though in 2015 it had Three as the centrepiece of the deal). It would represent a significant achievement for MediaWorks CEO Cam Wallace, who has had to rebuild the company after its separation from Three in less than two years, and for Moloney, who inherited a strategic muddle from former Sky CEO Martin Stewart.

It follows the TVNZ-RNZ merger as a potential major change in our media, after a decade of big transactions (Stuff-NZME, Sky-Vodafone) being thwarted by the Commerce Commission. And while little would immediately change, the potential of Sky and MediaWorks is tantalising, for talent, advertisers and audiences alike.