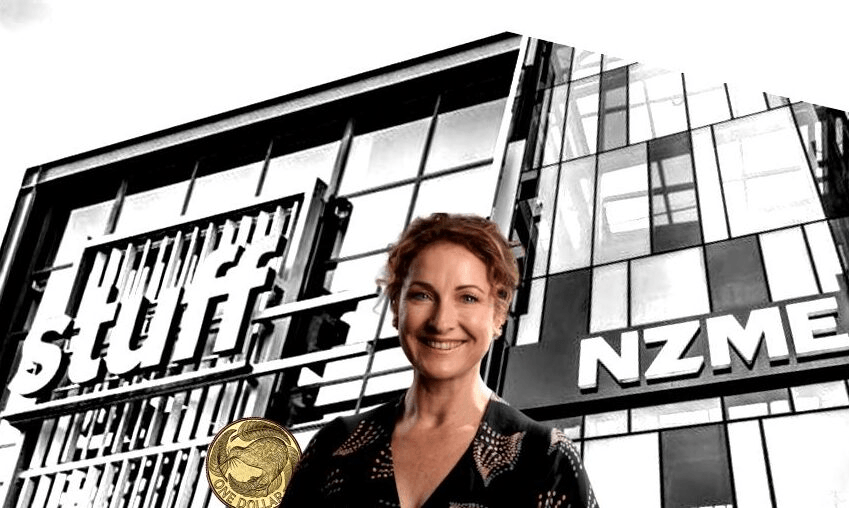 In the space of a tumultuous half hour New Zealand’s media landscape has been utterly transformed, with Stuff CEO Sinead Boucher completing an audacious management buyout from its Australian owners Nine, while hundreds of staff are about to be laid off at MediaWorks. The two companies are giants within their sectors, with Stuff New Zealand’s largest newspaper publisher, most-viewed news site and the biggest employer of journalists, while MediaWorks operates New Zealand’s biggest privately-owned TV channel, along with a huge network of radio stations, digital properties and outdoor advertising sites.

Boucher’s move to buy Stuff for $1 will send shockwaves through the industry, with it representing a brutal setback for NZME and its CEO Michael Boggs, who made an extraordinarily aggressive and public move to force a purchase through two weeks ago today. That ended in a humiliating defeat in court, and a savage column from Stuff political editor Luke Malpass which said that Nine’s posture now was that it was willing to sell Stuff to “anyone but NZME”.

During court proceedings subsequent to NZME’s bid, it became clear that another bidder had emerged, with speculation mainly focusing on external parties. Sky TV, NBR owner Todd Scott and TVNZ were among those floated, but most missed the possibility of Boucher reviving the management buyout option she had contemplated last year.

“I am pleased to confirm that I have agreed a deal with our owners, Nine Entertainment Ltd, to purchase Stuff Ltd, bringing the business and all its mastheads back to local ownership,” said Boucher in a statement.

“Our plan is to transition the ownership of Stuff to give staff a direct stake in the business as shareholders. Local ownership will bring many benefits to our staff, our customers and indeed to all Kiwis, as we take advantage of opportunities to invest in and grow the business.”

The prospect of staff becoming shareholders gives it a real point of difference, in a New Zealand media market where the scale operators are either publicly listed, government-owned or held by offshore private equity-style funds. It will make it a far more attractive proposition for government support, whether through subsidy or loan, than its previous status as an unloved element of an Australian conglomerate. Its ability to either sell off local papers, or mount a more convincing campaign for reader support, will also change radically with this new ownership structure.

Meanwhile, the scene at MediaWorks, jointly owned by vulture fund Oaktree Capital and Australia’s QMS, could not be more different. CEO Michael Anderson held an all-hands meeting to inform staff that 130 jobs were likely to go in a restructure across the company. “As of today, we must begin reducing the size of our business and we are now entering a restructuring process across our sales, out-of-home and radio divisions,” wrote Anderson in a follow-up email. “It’s proposed that in the region of 130 of our friends and colleagues will have to leave our business.”

This was particularly shocking as outdoor, sales and radio represent the previously profitable parts of the business, and pointedly exclude television – the arm which was put up for sale late last year. There was also a suggestion that the news division had its own announcement coming, with an all-hands meeting scheduled for 10.30am, though sources have told The Spinoff that news is unaffected by the layoffs, and that while TV remains for sale the intention is to spare it from layoffs.

MediaWorks’ situation is particularly troubling, as it was the company most directly impacted by the government’s $50m media bailout package. The fact it is laying off more than 100 staff less than a month later suggests that the forecasts for the whole advertising-funded side of the industry remain very bleak.

For today though, Stuff will be ignoring that to focus on the positive of finally having local ownership and a CEO with complete control of her company. The sale brings to an end a four year long saga, during which rival NZME – publisher of the NZ Herald, along with multiple digital and print assets and a radio broadcasting giant – attempted to first merge with, then acquire Stuff. For years it was a joint process, with both parties appealing to the Commerce Commission, then ultimately to the court of appeal. As recently as December, NZME began agitating for a law change and “kiwishare” arrangement to allow it to complete the merger, a possibility deputy prime minister Winston Peters voiced support for.

The process cooled, with the government focusing instead on a proposed merger of its own entities in TVNZ and RNZ, until Covid-19 and the associated lockdown hit the New Zealand media with a savage blow. Advertising disappeared from almost all outlets, with one issue of Stuff’s flagship Sunday Star-Times having just four paid advertisers in its pages.

That changed with a shock announcement two weeks ago, when NZME CEO Boggs announced publicly that he was seeking to purchase Stuff for $1, and requested emergency commerce commission approval to do so. Nine responded with fury, saying that their exclusive sale talks had broken down the previous week, and successfully fighting an attempted injunction from NZME trying to force it back to the negotiating table.

Today’s announcement sets the stage for New Zealand’s most long-running media rivalry to be maintained, if not strengthened. Nine CEO Hugh Marks said in a release that the company was happy to be releasing Stuff back to New Zealand ownership.

“We have always said that we believe it is important for Stuff to have local ownership and it is our firm view that this is the best outcome for competition and consumers in New Zealand,” said Marks.

News of the buyout and layoffs swept aside a release from Sky saying that it had successfully raised around $120m through a new share offer. Between the three announcements, it amounts to something like a reset of New Zealand’s media market. Yet given the ongoing stresses of Covid-19, this is unlikely to be the last historic day we see from the embattled sector.