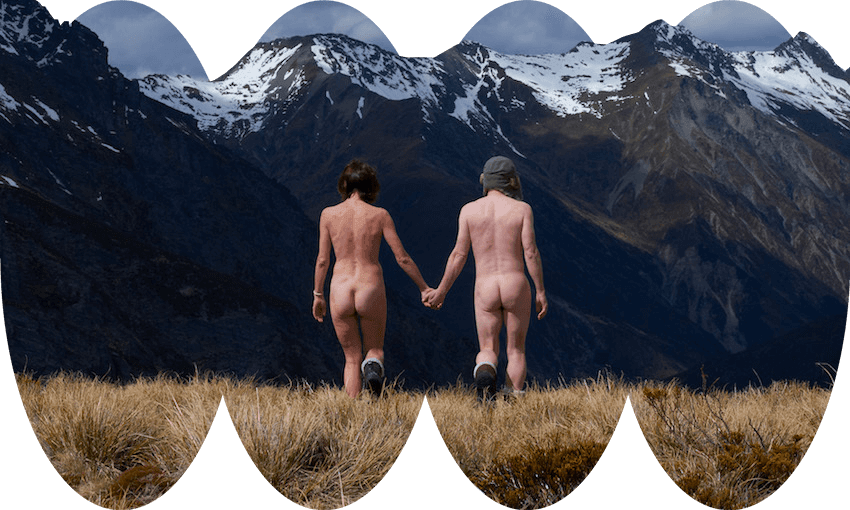 Nude Tuesday is almost definitely the most starkers New Zealand film ever made. Alex Casey talks to the makers about how much work goes into wearing not that many clothes.

When writer Jackie van Beek and director Armağan Ballantyne started pitching a local film project called Nude Tuesday more than five years ago, the pair quickly came to realise where people’s interest lay. “Put it this way: people were less interested in the Tuesday aspect and had way more questions about the Nude,” van Beek laughs over Zoom.

They weren’t selling the surreal comedy, spoken entirely in gibberish, as the most naked New Zealand film ever made, but they both agree they might have accidentally taken out the title. “I imagine you’re right,” says Ballantyne. “I hadn’t even thought about it in that way – it just felt like an inevitable act for the story.” The act she is referring to is the final 15 or so minutes, where the film goes full frontal among the flora and fauna of the deep south.

Having followed the journey of a buttoned-up, middle-aged couple as they head to a woo-woo camp in an attempt to save their stuffed relationship, it should hardly be a surprise to viewers that Nude Tuesday ends up absolutely starkers. “We thought about where we could place them that would be so confronting that it would bust them out of their malaise,” van Beek explains, “and very conservative suburban couples tend to not enjoy walking around nude.”

Although it makes sense for the story, the nudity in Nude Tuesday serves a bigger, more symbolic purpose. Both Ballantyne and van Beek share a love of European and in particular Scandinavian cinema, where nudity is far more common and far less sexualised on screen. “You often see characters in the nude or half-undressed where it’s not during a sex scene,” says van Beek. “Nudity is just much more normalised in those countries and therefore in their films.”

In films from Australasia, however, van Beek has felt frustrated by the narrow use of nudity. “Any time I see a character in the nude, they are often having sex or thinking a sexual thought, whereas when I’m nude in my life I often just want to have a shower or lie on a beach and get an even tan, rather than bonk.” In that respect, she says Nude Tuesday did have a slight agenda to normalise nudity outside of strictly sexy scenes.

But making a film with this much full frontal nudity isn’t quite as straightforward as simply disrobing and rolling the cameras. Tandi Wright, one of New Zealand’s leading intimacy co-ordinators, became involved in the project after the film was cast, with a star-studded list including Jemaine Clement, Karen O’Leary and Chris Parker. “The production had been super clear that they were going to be naked, so that was always part of the deal,” says Wright.

“But it’s one thing to say ‘yes I’m fine with that’ and it’s another thing to actually have to do it.”

Wright met with each actor individually multiple times throughout the pre-production and filming process, as well as holding group meetings for the men and women in the cast to share their concerns. “It’s quite an emotional journey to traverse, she says. “Good actors make it look easy.” What helped was the location itself – the crew and cast were staying in a campground not dissimilar to the quarters that feature in Nude Tuesday. “There was nowhere else to go except the local pub at night, so we would hang out there and it was great for those quiet chats.”

Based on those conversations, Wright communicated a set of ground rules to the entire crew, including that eye contact was to be maintained with the cast at all times and only anatomically correct language was to be used on set. “We don’t say ‘tits, cock, ass’, we say ‘breasts, penis, buttocks’,” Wright explains. “It is professional language, it’s not pejorative, it’s not infantilising, it’s clear and precise.” With clear guidelines around conduct, Wright says they were able to maintain a “safe and supportive atmosphere” throughout the production.

Over three memorable days of filming, these ground rules were put to the test. The cast was choppered to a snow-capped, alpine location to shoot the climax of the film, wearing little other than hiking boots and knitted hats. Thankfully, Wright had met with the costume department prior and they had already rehearsed their robe distribution strategy. “We figured out where the actors would be positioned, and then we’d have to find rocks and things to hide behind, then we would run towards them across the snow with the robes whenever we weren’t shooting.”

Unfortunately for Jemaine Clement, who plays the kaftan-swishing camp leader Bjorg, the robes were no match for the icy alpine lake that he stoically wades into during the sequence. As was Hollywood reported by the Hollywood Reporter, he was diagnosed with “mild hypothermia” after the stunt and required a brief stint in hospital. “Poor Jemaine,” sighs Wright. “He was incredible that day, but he went in really, really slowly into that lake – I was thinking, ‘god you could speed this up’ – but he was so fully in character, he was just amazing.”

When the cast and crew made it down off the mountain, Ballantyne remembers a newfound sense of camaraderie. “We all gathered around the fire and celebrated the fact that we pulled off this really complex thing and the actors were so brave and so magnificent, and it just felt really wonderful.” There was even a spate of voluntary skinny-dipping in an icy pool. “Leading up to something like that, of course everyone had a level of trepidation,” says van Beek, “but afterwards the relief factor allowed for lots of people to just de-robe and dive in.”

Even 10 years ago, shooting a sequence like this would have been a very different story. Before the intimacy co-ordination boom, in which Aotearoa was a world leader, shooting sex scenes and nudity was a much more haphazard process. “I’m not sure that everyone would have come out of it in such a good space,” says Wright. “Intimacy co-ordination definitely opens up possibilities, because we can talk it through, figure out the storytelling involved, and the actors are much more willing to explore these scenes and make them better because they are safe.”

Despite decades in theatre and film, van Beek had never worked with an intimacy co-ordinator prior to Nude Tuesday, and says the experience is worlds apart from her early acting experiences. “When I was younger, I just didn’t really feel like it was my place to ask about things I was uncomfortable with. Now it is very much the thing to do, people are being very encouraged to be clear about their boundaries and asking what is in place to keep them safe.”

Ballantyne hopes the care that went into the process shows on screen. “Watching these actors go through this and become more confident, there’s such a beauty to it,” she says. “I hope that we can remove that sense of shame that is so often attached to nudity and that it might instead be a celebration of the freedom you have when you are at home in your body.” Van Beek agrees. “I really hope audiences feel like it is a celebration of something, anything, really. There is something about the film in that it kind of encourages you to dare to be different.”

One of the many enduring and spectacular shots in Nude Tuesday comes at the end of the film, when our two main characters face out towards the mountainous landscape, both absolutely butt naked. “It’s really beautiful to see on the big screen,” says Wright. “They both just look like insignificant animals in this vast landscape which, I suppose, is exactly what we all are.”