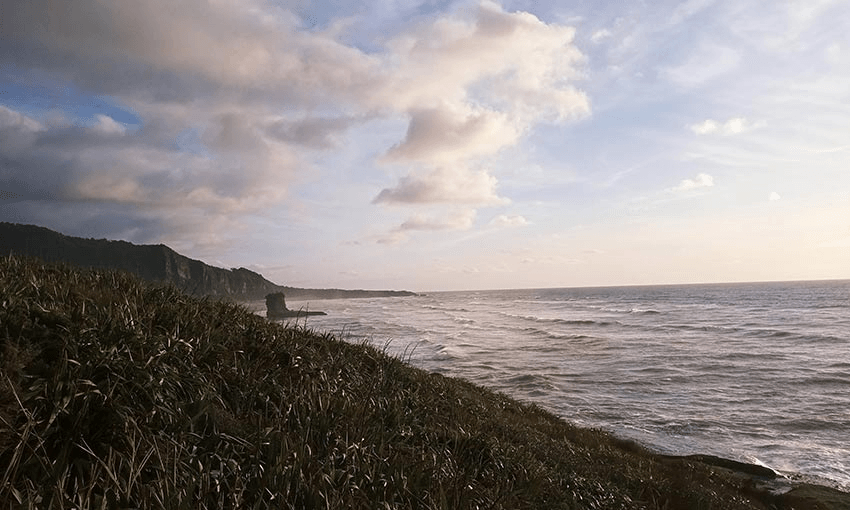 The stunning view down the coast from St Highway 6 near Punakaiki. Photo: Michael Andrew

The stunning view down the coast from St Highway 6 near Punakaiki. Photo: Michael Andrew

Between the city and the coast lies an insurmountable gulf, or so they say. Fresh from university, Michael Andrew decided to test that by interning at a local paper in the West Coast and found himself beguiled by the strangeness and the beauty.

I had never smelled fresh newsprint coming straight off the press before.

Then I went to Greymouth and interned as a reporter for the Greymouth Evening Star, and I got to smell it everyday.

At first it’s unnatural; the astringent, chemical odour of ink, like something from a textiles factory. But then it grows on you. Coupled with the whirling and humming of the Goss press – which at the Grey Star, is located adjacent to the newsroom – it came to cast a certain magic that would define my whole experience on the Coast.

I didn’t know much about the newspaper before I came to Greymouth. The internship was a requirement for my university journalism course and I had the opportunity to apply to any newspaper in New Zealand.

I picked Greymouth because I wanted an excuse to travel to an enchanting and fascinating place, which I thought was constantly being misunderstood.

In Auckland, where I live, seldom do we receive any news from the Coast other than stories about dying towns, receding glaciers, angry miners, angry farmers, angry weather and a rampant blood feud between conservation and coal interests. I’ve read enough news by now to understand that whenever a place is portrayed that simplistically, it is invariably far more complex.

But even if those issues did exist, what better place for a novice, city-based millennial journalist with fairly progressive ideals to escape his own echo chamber and challenge his own biases?

I packed my van and started the long drive down the country, setting a leisurely pace until I emerged on day six on the western side of the Buller Gorge and felt my heart open wider than the grey Tasman sea spread out before me.

If ever there was a place where someone can feel free, it is the West Coast. It’s wild, remote and hauntingly beautiful. It refuses to accommodate comfort-seekers or pretension and moves to the roll of its own furious waves.

I took the coast road south from Westport, hugging that narrow strip of land between the primeval Paparoa National Park and the surging ocean smashing boulders into sand and pancakes.

From the first day, my time at the Greymouth Evening Star was magnificent. I walked into the art deco building – home to the paper since the 1940s – in the centre of town and was immediately put to work writing stories.

I covered struggling tourist operators at Fox Glacier, a long lost collection of heritage notebooks returned to the library, the end of controversial white baiting season and a local lawyer’s appointment as a notary public.

After filing a story I would sit at my desk and listen to the sound of the thriving newsroom; the four reporters making phone calls, the subeditors typing away and chatting, the police scanner beeping on the desk, filling the room with stories from the quirky underbelly of the West Coast: intoxicated teen stole friend’s car, intoxicated man stole friend’s chickens, campervan driving up State Highway 6 with rear tyres on fire.

Steve Braunias’ words went through my head as I sat and listened, waiting warily to hear a report about someone “giving the bash”, one of the most common crimes he covered as a court reporter with the Grey Star in the 1980s.

Then the newspaper would appear on my desk; a freshly printed afternoon broadsheet with a bold masthead, still warm from the press with my story, and byline on the front page.

Sure, some of the stories were quaint, but that’s the magic, and necessity of community news. They were local stories, about local issues for local readers, informing them about what’s happening in their town.

While regional and metro newspapers across the country are closing or haemorrhaging readers and circulation numbers, the 150-year-old Grey Star is still holding out. It holds the title for the newspaper with the highest readership per capita in New Zealand.

Through my reporting, I found the people of the Coast to be among the most courteous and friendly I’d ever met.

The region was also, as I expected, far more politically diverse than it is nationally portrayed. Even to my highly sensitive urban-progressive gaze, I did not encounter the notorious faction of “blue” conservatism that I was told dominated the region.

In fact, I found a melting pot of ideologies – indicative perhaps of the Coast’s long history of unionism and workers rights – The New Zealand Labour Party, after all, was born just over the hill in Blackball.

I heard an owner of a bookshop which specialised in Russian literature espousing the compassionate ideals of socialism.

I heard an old man who looked like Walt Whitman sitting at a bar and cursing the Labour Party, calling them turncoats and scoundrels.

I heard a pensive fisherman say the only reasons he whitebaits wasn’t so much to catch the fish but to escape his wife for a few hours.

And I heard a pair of scruffy youths discussing the medicinal properties of puha – a miraculous native thistle that is frequently treated as a weed.

The Coast is not simple, nor is it dull. It’s a mad, proud, delightfully eccentric place where a hairdresser with no political experience can be mayor and where the name Eugenie can prompt more outrage than the name Trump.

After my internship, when I told Paul Madgwick, the encouraging editor of the Grey Star – and also the chairman of local iwi Te Runanga o Makaawhio – that I was planning to write a story about my experience on the Coast he gave his blessing.

I couldn’t see the warts. But if they were there, it’s because they needed to be there. They were as natural and normal as the sand flies that attack your feet whenever you stay stationary for a minute, or the rain that tumbles in biblical blankets from the grey heavens, or the smell of fresh newsprint – pungent, industrial yet carrying with it the promise of stories.