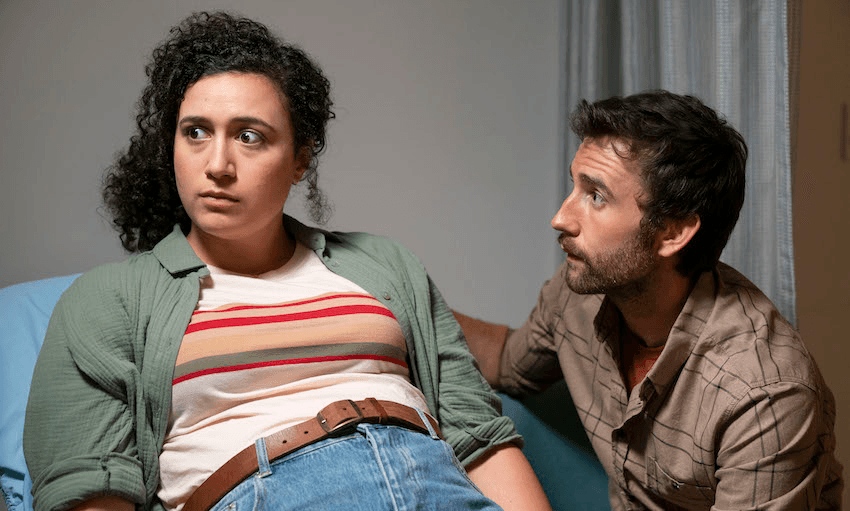 Review: Rose Matafeo will make you laugh and make you cry in Baby Done

The comedian stars opposite Matthew Lewis, the artist formerly known as Neville Longbottom, in a charming new New Zealand comedy about a pregnant woman completely losing her shit.

Recently I watched all of series one of Duchess, the Netflix vehicle of comedian Katherine Ryan, based on her life as an unconventional single mother. I’m a huge fan of Ryan’s stand-up and wanted to love it but it proved that great writing can’t make up for a lack of acting skill – something that realistically takes years to hone. I’d be lying if I said I wasn’t a little bit concerned Baby Done would suffer the same fate.

As it happens, I needn’t have worried. Award-winning stand-up comedian Rose Matafeo has proven her comedy chops in Funny Girls, Temps, and as part of the excellent Australian ensemble in Squinters, but here she shows a full palette of colours as an actress. Her personal brand of self-deprecating humour works well in-character, this time as Zoe, a fearless, tree-scaling arborist. Her fellow arborist boyfriend Tim (British actor Matthew Lewis) is careful where Zoe is impetuous – they’re different and complementary in the way the best relationships are, and the chemistry between the pair initially crackles.

Zoe finds out she’s pregnant just prior to qualifying for the world tree-climbing finals in Canada. Determined not to settle for domesticity like her other child-burdened friends (“I want to have a baby – I just don’t want to turn into a mum”), she becomes obsessed with completing an adventurous to-do list that becomes increasingly untenable thanks to her expanding belly and declining emotional state. Zoe works herself into a state of denial that becomes the catalyst for a run of disasters and forces poor responsible Tim into a position he neither wanted nor asked for.

Zoe’s very natural fears around parenthood are parlayed into neuroses for comedic purposes, but the story is still told lightly and truthfully through director Curtis Vowell’s lens and Sophie Henderson’s script. The screenplay sits comfortably among a group of beautifully weighted comedies penned by women from the past decade, about the crossroads of freedom and motherhood, namely Spinster by Jennifer Deyell, Gillian Robespierre’s Obvious Child and Jennifer Westfeldt’s Friends With Kids. Under less subtle care, or for, say, an American audience, Zoe’s ute-driving, chainsaw-wielding bravado might have been treated as something to be “cured”, or positioned her as anti-other women. In this case it was neither, rather a tribute to bold women who still get to be flawed and frightened. One of a million reasons to love stories written by women about women’s experiences.

Producer Morgan Waru and Piki Films, the production house started by Taika Waititi and Carthew Neal to champion diverse voices in New Zealand film-making, have left no doubt they are setting the agenda for the industry. With a body of work written, produced and directed predominantly by women and people of colour, the meritocracy crowd are gonna have to find a new tree to bark up, because the fact is, the Piki team are producing, and nurturing, some of the best film talent in recent history – with nary a Māori gang member cliche in sight.

Emily Barclay (In My Father’s Den, Sisters) shines as best friend Molly, the deadpan social justice warrior (and willing participant in the world’s worst threesome) who’s always ready to pour cold water on a nice time by highlighting the plight of women and children in third world countries. The b-story scene-stealer, though, is Brian (The Brokenwood Mysteries’ Nic Sampson), a pregnancy fetishist, or “preggophile”, that Zoe seeks out at a particularly low ebb. Rather than playing for laughs at what a weirdo, lecherous creep he is, Brian is kind and his kink is treated humanely (OK, he’s a tiny bit creepy). In explaining his reasons, he gives Zoe a much-needed self-esteem boost, providing the most surprising “awww” moment of the film.

Baby Done sometimes left me wanting more from the supporting cast. The film features cameos from nearly all of Auckland improv troupe Snort, whose famed wit felt under-utilised in places. We were, however, treated to note-perfect turns from Madeleine Sami as a no-nonsense obstetrics nurse and Rachel House as a principal with a finely tuned bullshit detector. I also thought more could be made of the couple’s relationships with their apprentice – sweet, troubled teen Sonny – and their dog Bear, to explore the nurturing instincts that can exist in a “chosen family” context.

Ultimately, the whole film belongs to Matafeo’s star performance as the brave, vulnerable and overwhelmed Zoe. She’s made us laugh before but what she hasn’t done is made us cry. In the film’s penultimate scenes, as the reality of what she’s done comes into stark relief during a difficult (and yet somehow still achingly funny) labour, she had me weeping with sympathy. As someone on the cusp of turning 40, reckoning with an inevitable loss of freedom and youth is something I’ve had time to ponder this year. I haven’t reached many conclusions, except that new milestones are both scary and nothing to be scared of. What Matafeo portrays so well is that trying to comprehend both of those things can sometimes make you feel like you’re downing.

It’s another prestige accomplishment for the Edinburgh Festival Award winner, one that should, in a just world, lead to bigger roles. I’m absolutely confident she could carry many more films, made for international markets.

I came out of the cinema wanting to see more… a lot more. And with a powerful urge to climb a tree.

Baby Done is in cinemas October 22.