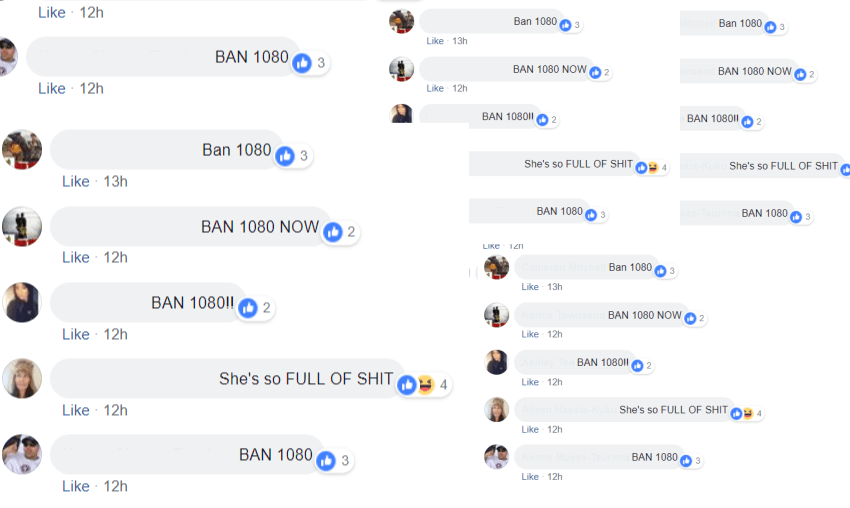 Livestreams posted on Facebook by our major news organisations have been overrun by an army of anti-1080 activists. Hayden Donnell goes in search of the source of the spam campaign.

Yesterday the government announced new wheel clamping regulations. As it often does, the Herald posted live video of the press conference on Facebook. It was pretty standard political fare: Phil Twyford and Kris Faafoi said “cowboy clampers” roughly 300 times as they explained their half-hearted new rules. In the comments, though, a different story was playing out. Virtually no-one there cared about cowboy clampers or even Phil Twyford. Comment after comment flooded in, all variations on the same plea. Each carried some version of the words “ban 1080”.

I was watching the livestream for my fix of parking legislation information, but those comments were all I ended up seeing. There were just so many, and they were so insistent. The Herald’s moderator couldn’t control them, and appeared to have given up trying. It had to have been a concerted campaign. But who was organising it? And how often did this spam army strike?

I got in touch with a Herald social media manager, who said she first saw the mass 1080 comments about a month ago, mainly on live videos. A social media manager at Stuff.co.nz said the #ban1080 brigade had regularly deluged his website’s Facebook page in recent times. He’d noticed the comments first on a Facebook Live video of prime minister Jacinda Ardern’s press conference after returning from maternity leave. He’d tried to hide them but there were too many, and they came too fast. One News said something similar, as did Newshub. Every major news organisation’s Facebook feed had become riddled with anti-1080 fervour. They may have tried to do live videos on every topic from child poverty to wheel clamping, but the comments were always about 1080, and they were just about impossible to police in real time.

Where was the flood coming from? My Herald contact had a clue. She’d traced some of the comments on her page back to the newly formed Facebook group, Operation Ban 1080.

The page started up about a month ago, and has already grown to nearly 40,000 members. It’s mostly good-natured for Facebook. But if there’s one thing that fills its members’ heads with rage like buzzing swarms of wasps, it’s 1080. They believe it’s murdering the animals, waterways, and probably babies of New Zealand, and they won’t rest until it’s banned.

I searched the site’s history for evidence its members had overrun the Facebook pages of our major news organisations. The first hint I could find of the campaign came on August 1.

The campaign escalated after that. On August 6, a live video of Ardern was targeted.

More Ardern live videos were targeted in the following days.

At first the troll army limited themselves to political live videos. But the targets widened as time went on to other live videos, and any international stories.

There was some dissent, but mostly the group was united behind the cause of spamming every live news video with irrelevant calls to ban 1080.

Eventually the pages of every major news site had been spammed.

Not even the Green Party could escape the barrage.

I asked one of the site’s moderators how the spam campaign got started.

“It wasn’t really something that was promoted by anyone, all of a sudden it just started happening,” he said. “I saw a few of my mates commenting on a few live feeds then next minute it was just going [crazy] … Now every live feed I see from any news organisation that are streaming it just gets hammered in the comments from Supporters to Ban 1080 in Aotearoa.”

He said there was no strategy behind the campaign other than to get government and media to listen to the anti-1080 message. “It’s just a simple plea to the government to [hear] the [tens] of thousands that oppose the use of 1080.”

At the very least Operation Ban 1080 has exposed a fissure in Facebook’s already terrible moderation tools. Its live videos are almost impossible to monitor with any amount of effectiveness. Comments come in faster than people can moderate them. If Operation Ban 1080 has proved anything, it’s not that 1080 should be banned, but that a committed group with a moderate following can overrun the social media feeds of our biggest news organisations with little-to-no organisation and minimal effort. That feels like a problem that could have some serious real world implications if it was seized upon by groups with worse intentions than some misguided environmental campaigners. It’s almost enough to make you want to ban Facebook.