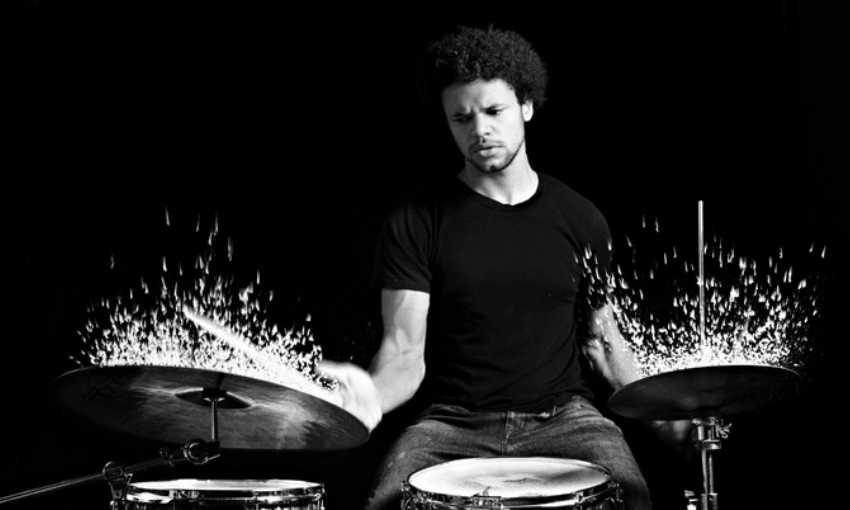 Beyond RNZ Concert: Myele Manzanza on musicians’ struggle to make a living in NZ

With moves underway around RNZ Concert and a new state-funded music station, how will experimental and less commercially-focused musicians be affected? The Spinoff spoke to New Zealand-born and London based jazz musician Myele Manzanza about the cultural and financial landscape for non-mainstream artists in Aotearoa.

The future of publicly funded music platforms is currently in flux, with the confirmation that Radio NZ is looking at setting up a new youth-focused music brand.

At the moment, it isn’t clear how focused such a brand would be on commercially viable music, though there will be obvious temptations for the organisation to target the largest possible audience.

What also isn’t clear is where RNZ Concert would fit into the wider mix. RNZ spokesman John Barr told the NZ Herald that “there are no plans to close RNZ Concert”. But with funding for the RNZ group tight, and being pulled in many different and important directions, it’s difficult to imagine a scenario in which the station ended up financially better off.

Part of the problem for RNZ Concert is that it is decidedly not youth focused. Many perceive the station as a bastion of elitist boomer culture, subsidising music for people who have the means to be paying for it themselves.

That’s probably an unfair perception for a few reasons. Firstly, RNZ Concert does a lot of recording of, well, concerts, and in doing so both helps the financial viability of such events, and opens up access to anyone with a radio. It’s also the only mainstream radio station that ever plays experimental and non-commercial music, which can throw those musicians a crucial lifeline to survive in a difficult industry and small market. And it can also give local composers a rare chance to have their cultural contributions be heard.

So what is the reality of trying to build a career playing non-mainstream music? And should the government be in the business of supporting that kind of cultural output?

To discuss those questions, The Spinoff got in touch with Myele Manzanza. He’s been a professional percussionist for more than a decade, putting out jazz records under his own name, along with being part of an extensive list of other projects and touring bands, and is now based primarily in London.

The Spinoff: How long did you try and stick it out in New Zealand first, or was going overseas always the plan?

Relocating overseas was always an ambition of mine. I had been able to scratch the international itch for a while having done tours and ‘seasons’ in the northern hemisphere fairly consistently over the last 10 years, but I had been hitting a glass ceiling for a number of years being based in NZ. It was only over the last year where my life circumstance had opened up enough to consider a proper move overseas.

How does your life as a professional musician look different now?

The level of opportunity being based in London compared to New Zealand is astronomically higher for a niche artist like myself. It’s only anecdotal, but with the size of the country and the way arts are treated in the broader New Zealand culture, I’d say if you’re a non-mainstream artist based in New Zealand you have about a five-year window, where you have perhaps four or five profile building concerts a year that you can do, before you’ve maxed out your exposure to the market and the audience has moved on. After that point you’d need to either invest time and money into building an international audience, divest from being a performing artist and move into music education or another field of work, or just accept the limitations of location and be happy with your lot in life.

In comparison, since moving to London I’ve been able to get six good strategic profile building concerts in the UK / EU in the last 3 months, with various smaller scale bread-n-butter shows that enable me to sustain a performance career and build toward more major tours and collaborations.

In terms of your career, have other projects sort of subsidised your ability to pursue less commercially focused work?

Currently my main bread and butter is 100% performance – my own “Myele Manzanza” projects, DJ sets and session work for other artists, as well as a little drip feed of APRA royalties now and then. However over the years when I was based in NZ I’ve had other work outside of music, for example as an area manager and sales rep for Phantom Billstickers, as well as private drum tuition.

Was Concert the first station in NZ to play your work? Are there other stations around the country that have played much of it?

Radio Active in Wellington would have been the first station to regularly feature my work, and I’ve had notable support from the Bnet and independent stations around the country. There has also been play on Radio New Zealand, and notably RNZ Concert since Nick Tipping has taken an active role in jazz programming there.

I’ve seen you make comments before about how difficult it is to get jazz onto mainstream platforms in NZ. Some would argue that’s just because the genre has declined in popularity. Why do you think jazz matters?

To be honest, I don’t know if jazz matters all that much. What I think is more important, beyond any genre definitions, is cultivating a culture where boundary-pushing New Zealand art is invested in and respected. Jazz doesn’t matter as much as a progressive, pioneering spirit.

Do you think this is an area the government should be involved in? If so, why?

To take it a step into geopolitical territory, it’s undeniable that America has been the single biggest influencer of global culture over the last 100 years, and its cultural influence is inextricably linked to its geopolitical dominance. As much as its economic, manufacturing, technological and military strength have made it a super power, its art, music and movies have undeniable shaped the cultural consciousness of the world. This level of cultural influence over hearts and minds has done as much (arguably more) to assert America’s standing in the world through the 20th century.

Inevitably, as the USA’s superpower status diminishes, it will create an opening for global cultural influence as well. Nations with a savvy, progressive and forward thinking approach should see the opportunity this presents and begin investing aggressively in their arts sector. New Zealand could be the nation to do this, but it will require a long term vision, a 100 year plan. It’s not something that will see a return on investment within an election cycle. I would argue that Helen Clark’s 20% NZ music quotas in the early 2000s directly helped foster an environment that could enable an artist like Lorde to achieve as highly as she’s done on the world stage 15 years later. The Outward Sound investment in Fat Freddy’s Drop’s initial European expeditions helped enable them to break down doors for numerous New Zealand soul bands who have gone on to influence and be part of the global conversation of music of their era.

Right now, New Zealand’s young jazz and experimental musicians are writing and performing incredible music and making brilliant innovations that sadly, whether due to population, lack of funding and platforms, or just the broader attitude of our audience culture, aren’t getting the investment and recognition they deserve. It’s my sincere hope that that changes and our best and brightest talent not only doesn’t get wasted, but is utilised to the full to raise New Zealand’s standing in the world.