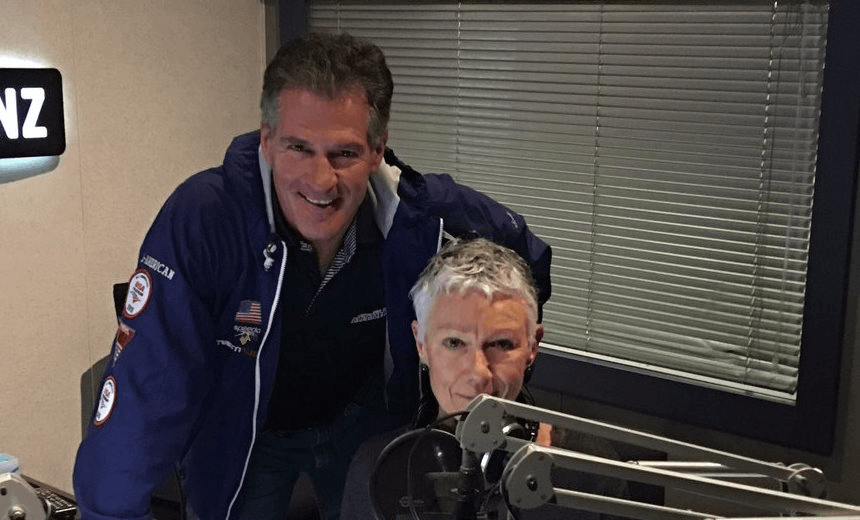 Over the weekend, US Ambassador Scott Brown had what he probably thought was an interview scheduled with Kim Hill. What actually ensued was a brilliantly shady media boxing match. Sam Brooks gives his play-by-play.

My prevailing memory of Kim Hill is from something I once taped on One, back in the dark ages where you would tape things on video and not just watch them online. This was back when Face to Face with Kim Hill was on TV, and an ad for it popped up.

Who was this woman who moved around the screen with no regard for framing or camera position? What was that voice? That accent? She radiated intelligence and charisma, she was like a lost Tennessee Williams heroine who, instead of having a tragic life, had found her rightful place in the world of broadcasting.

I don’t often listen to her on the radio, because as a hated millennial I often forget that the radio exists, but when people were tweeting around her latest interview this rainy weekend, I had a spare hour and decided to lay back and listen to what was less an interview and more a verbal boxing match.

What follows is my play-by-play of Hill’s interview with US Ambassador Scott Brown, covering topics as awkwardly broad as Trump’s misogyny and potential impeachment to Scott Brown’s upbringing and his daughter’s country music career:

00:33 – Almost immediately, Kim Hill brings up Scott’s ‘America’s sexiest man’ title, which he won in the 70s, and does so in a way that it is absolutely intended as a compliment, but it doesn’t really sound like one. This sets the tone for the interview that follows.

02:15 – “Here YOU are.” It’s all in the inflection. If Hill was sympathising with someone who had to take the bus to work that morning, this would be the inflection.

05:38 – “Because you have such extreme levels of poverty in America, it seems absurd you’re such a wealthy country” is said in the same tone that someone might comment that their steak is overcooked. A robust discussion of welfare, poverty and jobs follows, and I can imagine Hill’s face is similar to her face from her famous John Pilger interview:

09:50 – “What’s y’background in music?” Said with the trained disinterest of a professional interviewer. Scott Brown namedrops someone from Cheap Trick, which I understand is a rock band of some kind, who Scott Brown has also played with once at some point for some reason? I tuned out because Kim Hill stopped talking, and I don’t tune into a Kim Hill interview to hear who she’s interviewing.

15:53 – After Cheap Trick’s ‘Surrender’ plays, Scott Brown talks about how he’s going to play with Alice Cooper when they come, which is… a thing? Kim Hill continues to sound professionally disinterested.

17:35 – “You never took cocaine. Why would you not?” After hearing about Scott Brown’s wilder days in the ’70s-’80s, Kim Hill asks the question that I’ve often thought but never had the guts to voice.

21:38 – After a lot of political talk which is fairly dull, Hill says “You’re also a songWRITER” with the most strange emphasis but with such confidence that I think we’ve been saying it incorrectly all along.

Scott Brown defends Trump’s tweeting as valiantly as someone with a brain but who is still on the payroll possibly can.

30:50 – Scott Brown says overseas governments have been interfering with elections forever, which is a fun assumption to make! He then pivots to talking about the Democratic Party throwing Bernie underneath the proverbial bus. I can hear Kim Hill roll her eyes.

34:05 – “You don’t think he should have disaffiliated himself from [his businesses]… he’s put it in the hands of his children.”

Again, Kim Hill puts an emphasis on children that makes me believe wholeheartedly that rest of the world is incorrect.

The fact that Kim Hill forgets the name of American Idol brings me no end of joy.

They play a song by 13th-place finisher Ayla Brown, Scott Brown’s daughter, and they talk about her on the show, in a masterful gear shift. Ayla Brown’s song ‘My Hometown‘ is played, and it’s a catchy pop country song that I would probably be caught listening to in my darkest moments (Brown himself has played this song onstage with her at some point, for some reason).

42:00 – “Even I can kayak.” Shade, pure and simple. I would also pay to see Kim Hill kayak, if anybody has that footage.

43:10 – Scott Brown says “All Blacks” with the incorrect emphasis and it is absolutely incorrect. He does not have Kim Hill’s skill of being able to twist words to his will.

44:00 – And this is the start of the most beautiful, intense five minutes of the interview, where Kim Hill pivots like a goddamned ballet dancer at whatever the Dance Olympics are, going from talking about Scott Brown’s country-music toting daughter to addressing Donald Trump’s misogyny:

“Talking about women… one of the main problems people have had with your president is his apparent misogyny.”

Other burns, or you know, just facts stated in this section are:

“He addresses women on their appearance rather than their merits.”

“We watched him on the campaign trail when he was taking on Hillary, and that wasn’t taken on merit, he was making faces… it was misogyny.”

“We’re talking about a president who says on record, he clutches woman by the pussy.”

And then there’s the most genius moment, where Kim Hill appears to channel Ursula the Sea Witch at her most violent and deadly. Scott Brown says that Donald Trump paid a price for saying that and Kim Hill replies, “What was the price?”

She repeats, suddenly channeling Eartha Kitt at her most lethal and dangerous, “What was the price?” (The emphasis is my own, but I guarantee you that Kim Hill is perfectly fluent in spoken italics.)

“He was criticised for it, and that was the price he paid? … Can you apologise for a basic attitude of misogyny?”

47:08 – “Are you suggesting Donald Trump is getting a hard time because the media is disaffected?”

47:30 – “It’s unbelievable to me that all women don’t find Donald Trump disgusting. He is on the record for his distaste and disgust for women!”

“So he doesn’t always keep his word.”

“I’m not twisting anything. I am simply taking you at your word. You’re telling me that Mr. Trump keeps his word. I am saying that he obviously doesn’t.”

“Well that was bullshit then during the campaign.”

“At what point does he start telling the truth?”

I have no idea how Kim Hill manages to deliver that with complete truth while also making it sound like a performative lie, but kudos to her for that.

53:45 – Kim Hill asks if Scott Brown misses the cut-and-thrust of Washington, as though he hasn’t just been skewered like a meat slab at K’ Rd’s Turkish Cafe.

“I mean you’re just talking to me, relax.” That chills me to my soul, listening on tinny laptop speakers. I can only imagine what it would sound like sitting maybe a metre away from the tiger herself.

The interview wraps up quickly but not unpleasantly after that.

So kudos to Kim Hill for doing what Kim Hill usually does, and I encourage you to watch excerpts from Face to Face on NZ on Screen to see what a formidable interviewer she actually is, and we should all be taking lessons from her.

And god forbid anybody who gets in a boxing ring with her.

Listen to the full massacre here