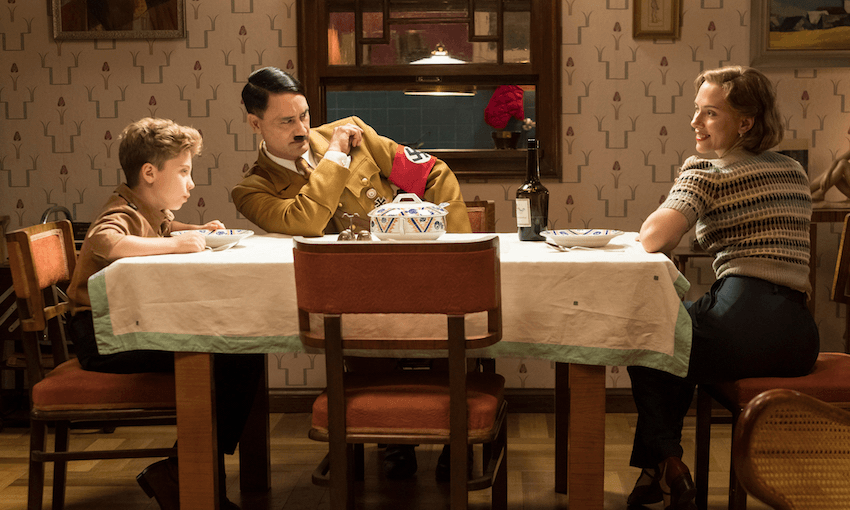 Jojo has dinner with his imaginary friend Adolf, and his mother, Rosie. Photo by Kimberley French.

Jojo has dinner with his imaginary friend Adolf, and his mother, Rosie. Photo by Kimberley French.

The latest film by New Zealand’s celebrity director Taika Waititi, Jojo Rabbit, is out in cinemas now. Spinoff writers offer their thoughts on the ‘anti-hate satire’, and whether it lives up to Waititi’s catalogue of hits.

I had a lovely time watching Jojo Rabbit – it’s an enjoyable, tense coming-of-age film that leaves you wrestling with some ideology. But my main takeaway was how Taika’s new film fully justifies Rebel Wilson’s whole deal. Wilson’s has a weird career: she was the next big thing right up until people realised that nobody wanted that much of her and her loud schtick. Which is a shame because when she’s given the right role (she’s also very good in Netflix’s Isn’t it Romantic), she’s a delight.

Jojo Rabbit uses Wilson as a highlighter rather than a backbone, playing a sort of hyperactive sidekick to Sam Rockwell’s Hitler Youth camp leader – remember how joyous she was back in the first Pitch Perfect? This is that Rebel Wilson. She gets the film’s biggest laughs, and in a film like Jojo Rabbit, any laugh is much-needed.

Who would have ever thought that ScarJo was capable of being warm, maternal and… funny? She and Thomasin McKenzie were easily the standouts of Jojo Rabbit for me, their relationship blossoming in claustrophobic, candle-lit moments as Rosie (Johansson) gets to know the Jewish teenager Elsa (McKenzie) hiding in her walls. As Elsa’s only point of contact with the world (or so she thinks), Rosie’s twinkly-eyed musings on hope, life and womanhood, punctuated with swigs of wine, left me tear ducts scammed, bamboozled, and hoodwinked.

Me eyes also pricked every time Jojo hugged his ridiculously lovable little mate Yorki with his little arms, especially as the nightmare descends. What else? Thomasin McKenzie is ferocious. Stephen Merchant stars in the role he once joked about nailing on old podcasts. Alfie Allen wears a touch of mascara. Rebel Wilson is Rebel Wilson. And Taika Waititi as stroppy, zany, imaginary Hitler pops up every now and again but is thankfully much further from the central focus than the trailer would have you believe. Just go see it FFS.

Thomasin McKenzie is not in Ferndale any more

Joel Coen says that film directing is at its essence “tone management”, and Taika Waititi has confirmed himself as a virtuoso in that craft. It is an unoriginal thing to suggest, but Jojo Rabbit really shouldn’t work. The format and plot ingredients ought at the very least make for something discordant or earnestly Brechtian. But Waititi is so good at what he does – universe-creating – that you don’t pause to wonder why the fuck an effete, Māori, anachronistic Hitler keeps wandering into the frame of an otherwise tender period movie.

That’s not to say you don’t think about all of that, just that it never stalls the engine. It’s funny, it’s moving, it’s beautiful to behold – and Thomasin Harcourt McKenzie and Roman Griffin Davis knock it out of the Olympiastadion.

A fog of fear descended around Jojo Rabbit a few months ago, a sense that now was not the right moment to be having a laugh about Nazis, and that either the movie or Waititi or both might be cancelled as a result. This resulted in the big bold lettering reading “an anti-hate satire” on the posters. The fear clearly can only have emanated from those who had not seen this sweet coming-of-age comedy, because its mild manners are present at every turn, from Waititi’s eager, insecure Hitler, to the comically inept Gestapo, to the well-worn haze of the soundtrack’s 60s-90s stalwarts.

Jojo Rabbit is essentially the same film he’s been making for a while now, familiarity making the trick a little more twee and gentle each time. It’s frustrating because he’s clearly a towering genius, and his public pronouncements have a brilliantly arresting quality that his films are beginning to lack. They’re now just funny when they could be that and so much more. Ultimately a little electric current of fear and danger is precisely what Jojo Rabbit lacks, and needs.

Taika Waititi is the Māori Wes Anderson. You know it, I know it, anyone who watches Jojo Rabbit definitely knows it. Jojo Rabbit‘s arts-and-craftsy set design, all dark wood and jewel tones? Pure Royal Tennnbaums. The stylised, shiny-button uniforms? Grand Budapest Hotel. The retro pop soundtrack? Um, where to start. And it’s not just the look and sound of Jojo Rabbit that owes a debt to the American auteur. An early section set in an adventure camp for boys so closely mimics the scouting scenes in Moonrise Kingdom that Anderson really should look into royalties.

The thing is, I love Wes Anderson films – and firmly believe there’s a lot more heart beneath their art directed surfaces than they’re given credit for – so it’s hardly surprising that I liked Jojo Rabbit too. It’s weird and funny and sad and sweet – and yes, whimsical as fuck, but that’s fine with me. If your tolerance for quirk is lower than mine, I’d advise treading carefully.

Taika Waititi has stopped just short of humanising those who dehumanise others. The most “Nazi” character is Jojo, who is described by his mother as a “fanatic”. The adults all laugh at Jojo when he describes how weird Jewish people are. “We’ve got bigger problems than the Jews,” says Yorki, an 11-year-old soldier. Captain Klenzendorf (the ridiculous Sam Rockwell) is too busy designing the flamboyant costume he’ll fight the Allies in to care about hunting Jewish people. Jojo’s mother, a witty, high-energy Scarjo, is sympathetic to the Jewish girl hiding in her roof.

Ahead of Jojo Rabbit‘s release, we were all terrified the phrase “anti-hate satire” would prove more meaningless than it sounded and that this film would be a mess. We had nothing to worry about. Child/teen actors Thomasin McKenzie and Roman Davis carry the emotional weight of Nazism and dehumanisation better than any adults on screen. They’re allowed to feel fear and grief. In short: no-one’s making light of the war, but also this movie is funny.