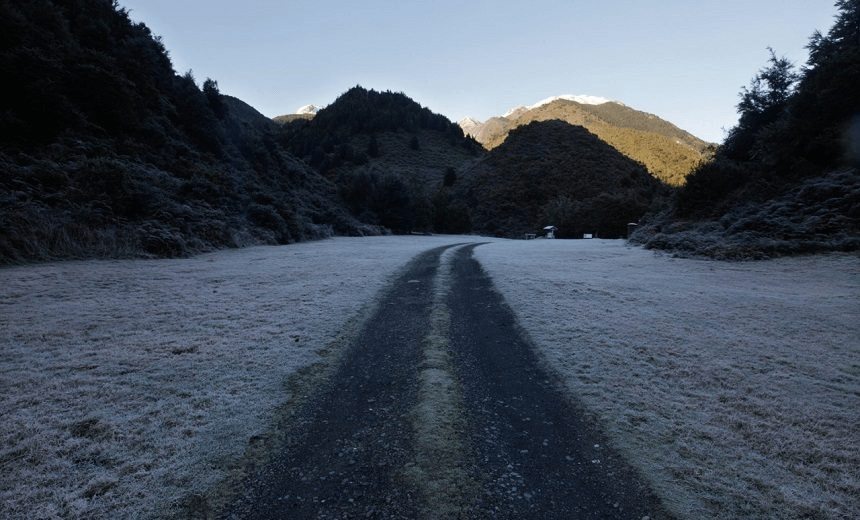 Swallowed by the wilderness: Naomi Arnold on her epic feature tracing the last steps of a vanished tramper

Just before Christmas, 2012, hiker Alistair Levy disappeared forever in the Kahurangi National Park. In the latest issue of New Zealand Geographic, Naomi Arnold retraces his steps, and speaks with the last people to have seen Levy alive. Here she talks about writing, getting lost, and how to justify a story that is guaranteed to hurt.

Getting lost in the outdoors is still a visceral fear for us townies. My father lost a close friend tramping when I was about 10, and I recall the phone call, my dad saying “Oh no,” and then him crying and hugging us. He was an outdoorsy guy and it was always possible the same thing might happen to him. It really stuck with me. Dad said “They say he died doing what he loved but that’s no comfort at all. It would have been terrifying.”

I got lost once, when I was about 13 on a Saturday Harriers bush run, and vividly remember blundering up and down hillsides, not knowing where I was going. I eventually found the track and my friend’s dad running back up it to find me. I was lucky. Living in Nelson surrounded by three national parks, there are tramper deaths and near-misses every summer, and as I like to go tramping too you do always wonder if you’re going to need that emergency blanket. Anyone can have an accident.

You mean other than me being a freelancer who is paid by the word? Well, when James asked for this piece he said “It could be 2000 words or 9000” and when I started writing it, it just kept going, and James helped me arrange it and cut the superfluous “ego holidays”, as New Zealand Geographic deputy editor Rebekah White puts it – those bits where you think you are writing all fancy but it’s just annoying for the reader. It is more than double anything I have written in the past, so it was hard. Luckily there was an obvious narrative – a tramp through the wilderness.

Where did you get all the detail?

The hut book, which handily lists the names of everyone in the area at the time, the dates they were there, what they were doing, and the weather. Then it is a matter of reading news stories, finding people, calling them, getting other names, and keeping on finding and calling until you can assemble a picture of what had happened, corroborating with others and matching media and police reports while not taking anything as gospel in case it’s wrong or everyone’s just assuming something’s true.

Forgive me for quoting Donald Rumsfeld: There are the known knowns, which you can confidently address. The known unknowns, which you write around, papering over the cracks. And the unknown unknowns, which are terrifying and keep you up at night in case you’ve got something wrong but don’t realise it. So you have to keep calling people because that 20th person might have a different piece of information that turns everything else on its head. For example, I had assumed Alistair Levy walked alone to the hut – but when I managed to find Sirus Lin it turned out Levy had picked up a hitchhiker and they’d walked together, and Lin remembered him well. But then Lin stopped replying to messages and doesn’t have a phone – he is still travelling – so that was as far as we got. There might be lots more.

The narrative is an approximation – you don’t know for sure what happened and even if you do know the “facts”, every person’s interpretation and memory is different. Time might reveal further info. I guess the best thing you can say is going on current information it’s as close as you can get.  There’s a reason they call journalism “the first draft of history”. You do want to keep reporting forever but then there are those deadline things to think about. That’s what’s good about the web – stuff can be updated.

How do you report something like this that is difficult for the family?

With a great deal of angst. The family did not want to be involved, so my first preference would be to just not do the story – I hate upsetting people. I get no pleasure from stirring up a fuss and in fact I get massive anxiety about it – heart palpitations, nausea, the whole bit. It’s why I find straight news reporting so exhausting.

The dead don’t get a say, and only their family are left to speak for them. Like Janet Malcolm said, “Journalists justify their treachery in various ways according to their temperaments. The more pompous talk about freedom of speech and “the public’s right to know”; the least talented talk about Art; the seemliest murmur about earning a living.”

So you find ways to justify it. You convince yourself you are doing good deeds because how can you live with yourself otherwise? And besides, the editor wants the story. So I was driven by wanting to spark some interest in cavers continuing to look for Mr Levy’s body while they are up there on Mt Owen. That was based on what someone close to him had told me at the very beginning – that it couldn’t be over for them until he was found. I recalled interviewing Nelson search and rescue legend Sherp Tucker a few years ago. He has been on thousands of searches and he said “It destroys people” not finding a body. No closure.

Then someone else close to Levy pierced my hubris by telling me that as far as they were concerned, Levy was buried there forever and any other search efforts were a waste of time. Cue another round of agonising. Why stir it up again, cause fresh grief, maybe help one person but upset another? And why, indeed, turn people into characters in a story at all? You’re never going to accurately represent the planet-like complexity of a human being through a story. Is it to stop other people from making the same mistake on Mt Owen? To try and find his body? To get Search and Rescue some recognition and donations? To simply tell an outdoors yarn? To offer a few minutes of idle entertainment? It depends on your point of view on the role of the media. I battle with it every time I write something difficult.

I asked my now-husband Doug to come with me; his grandmother’s farm is next door to Mt Owen and he grew up exploring those ranges and worked on them for DOC, so at least I had some local knowledge.

As we went over the maps, something didn’t add up. Levy’s route would have taken a superhuman effort to make it from the hut over the mountain and out to the road the next day, but it was clear that was what he had intended. It’s an hour away from Nelson and is an achievable wilderness trip for your average desk jockey but is still country not to be sneezed at; the sort of thing that Nathan Fa’avae-type adventure racers take on – and indeed they did, running GODzone there a few days later (there is a cool video at that link).

We had intended to go down into Castle Basin too, where Levy had intended to go, but I fell sick on the way up, and when I got to the summit – where Levy hadn’t been, but it was a good place to get an overview – I looked down into Castle Basin, and thought “OMG no.” It was immense and broken, like looking down into a city after an earthquake; shattered tenements and deep valleys. It is beautiful, but a hell of a place at the same time.