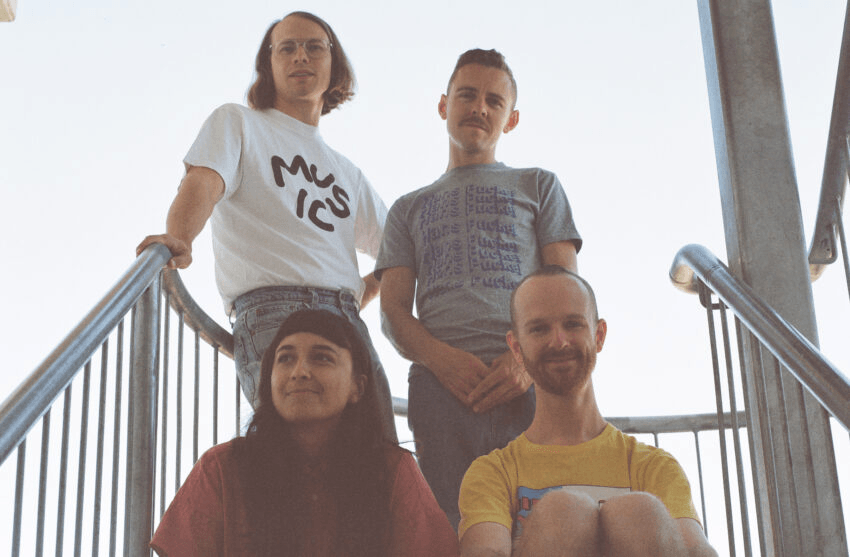 Live from our living rooms: How The Beths accidentally made a variety show

With the world in lockdown, and a new album set for release, The Beths decided to keep playing live – from their living rooms. As the band prepare for their first show in front of a crowd in months, they tell Josie Adams the stories behind Live From ‘House’.

When The Beths decided they wanted to reach their locked-down global fanbase with a series of live streamed acoustic shows, the first hurdle was logistical. With the four band members split over three houses, planning Live From ‘House’ involved finding a way to get all of them into the same video.

“We were trying to figure out how to put us in the background of the live stream,” bassist Benjamin Sinclair says. The solution: place a camera in the living room of Liz Stokes and Jonathan Pearce’s shared home, with Sinclair and drummer Tristan Deck on a computer screen behind them

“In the first one it was just a laptop, with these two floating there, extremely budget,” says Stokes (vocals/guitar). “We would make it up as we went along.”

Another challenge came from the way video streaming technology is designed, says guitarist Pearce. “These platforms crush the audio so much, and optimise it for the voice. So you see heaps of people go straight into Facebook, and all you can hear is the voice.”

“There’s also a weird noise cancelling thing with the guitars,” says Stokes – not a huge deal for acoustic sets, but a real problem for anyone looking to make a ruckus.

When The Spinoff met The Beths at an Auckland cafe last week, three cheese scones were ordered for four band members. There could have been ructions, but the mathematical quandary was solved by Deck. “We all get a half, and then we get a half of a half”. This band are problem solvers.

Faced with Live From ‘House’s audio quality challenges, Stokes took it upon herself to learn how broadcasting software worked. “By the third one, we were able to have a multi-camera set up and have our friends come in to help with the stream, and we had graphics,” she says. “We got a lot of What Now comments, which was quite inspiring.”

Fun, flashing graphics and hand-held roaming cameras meant they could build variety show-like segments. There was a time zone check, where viewers typed in where they were in the world and what the time was: Edinburgh, quarter past midnight; Ohio, 7.15; Whangarei, 11.15.

Q&As ran between songs, with the band answering hard-hitting questions sent in by fans: Who’s Pearce’s favourite left-handed batsman? Why does Stokes play an Indonesian G&L guitar? Do they remember playing in Boston and eating Boston snacks? Pearce likes Tom Latham; it’s cheaper and her mum’s Indonesian; yes, the cookies and donut holes were especially memorable.

Fan favourite the Snack Cam involved spontaneously running toward the band and shoving Pringles and biscuits into their mouths. “It wasn’t something you’d get at a gig, and you wouldn’t want it at a gig,” says Stokes now.

Now that Live From ‘House’ is reaching its end, does the band have plans to stream their upcoming shows for live music-starved audiences overseas? Pearce thinks it might be overkill. “Live snack cams roaming the audience would just be too much for American audiences, who are already freaked out that four of us are in the same room.”

The latest Live From House asked viewers to donate to the Marsha P. Johnson Institute, which supports the human rights of black transgender Americans, and to bail funds associated with the Black Lives Matter movement. Previous episodes encouraged people to stay at home, and to focus on finding happiness in lockdown – even if all they did that day was put on pants.

“People with a platform have a responsibility to amplify the message,” says Pearce. “The message was stay inside, and take care of yourself – mentally, especially.”

The shows were as much about the audience as the band, says Sinclair. “It felt like because we weren’t able to go touring when we were scheduled to, that it was kind of a condolence thing to play songs our audience would have heard [on tour],” he says. “We tried not to totally abandon our overseas audience.”

There have been three Live From Houses so far, and fans should expect at least one more. “We’ll complete our quadrilogy of live streams,” says Stokes. “It will be a lot like the last one, but with a small audience in the room. Even more What Now vibes.”

This period has been the longest The Beths have gone without playing to a crowd, and Saturday’s show can’t come soon enough. After selling out Auckland’s Powerstation in under a week, they’re doing what they do best and hitting the road. From August 27 they’ll be touring the country in support of their new album, Jump Rope Gazers, starting in Raglan and finishing up at the Gisborne Beer Festival in November.

This content, like The Beths’ new album Jump Rope Gazers, was created with the support of NZ on Air.