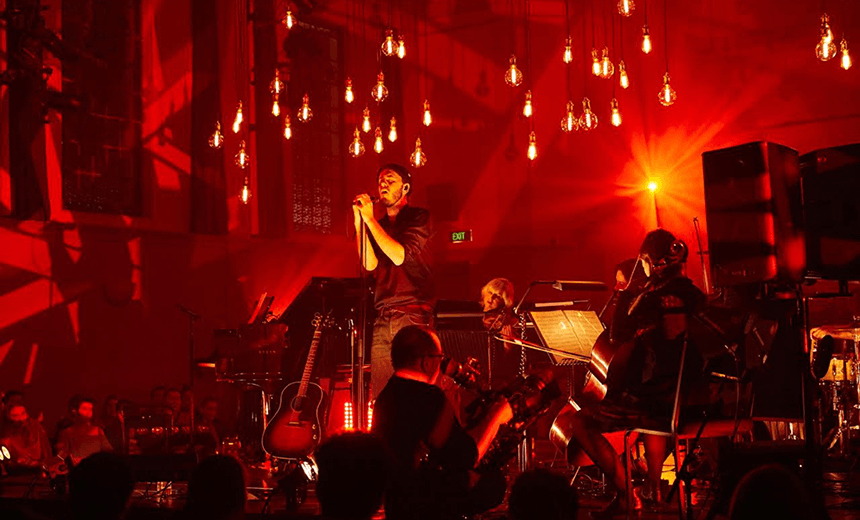 In an attempt to reclaim their position atop the music industry, MTV are going back to basics and reincarnating their most iconic series. Don Rowe attends the first ever MTV Unplugged in New Zealand.

Back in a time when the M in MTV stood for music and not ‘mediocre reality shows for munters’, the channel was almost single-handedly responsible for bringing the freshest tunes to the lounges and bedrooms of the last generation before the internet. Alongside endless hours of VJ-hosted video shows, a key component of their catalogue was the Unplugged series, featuring acoustic sets by everyone from Aerosmith and Elton John to Jay-Z and Nirvana. As the channel moved in the direction of Jersey Shore and Catfish, however, music took a backseat and Unplugged was shelved.

But last year, in an attempt to claw back their jaded audience, MTV announced the return of the show, shooting it straight in the neck with a hypodermic syringe of marketing money and a worldwide format. And so Evan Sinton, 3rd place winner of 2012’s New Zealand’s Got Talent, took to the stage last night for the first ever MTV Unplugged in these fair isles. Sinton, who these days goes by the stage name Maala (“it looked cool on paper”) cut an awkward figure at first. Accompanied solely by strings and a percussionist, the set was a long way from the pop beats that typify Maala’s recent releases.

“Far, I’m so nervous eh,” he said, shielding about a tenth of his body with the mic stand. “Couple songs though and we’ll be alright.”

And we were. As crooning doyen Jason Kerrison noted back in the halcyon days of 2012, Maala’s voice is both ‘distinctive and unique’. By the opening chorus of ‘Kind of Love’ the pipes were warmed up and, stripped of studio enhancement, Sinton’s voice carried through on its own merits. He was brooding, hopeful, hurt, joyous. He was pretty damn sexy in his little skux beanie.

There were slow points. A few grand piano ballads were sleepy though beautiful. Several of the more dance-y tracks fell flat with only padded drumsticks for percussion. Maala never quite reached Kurt-Cobain-surrounded-by-funereal-white-flowers levels of intensity – but who does? That was some heavy shit.

And the crowd were somewhat… flacid. Even without 808 trap beats, tracks like ‘Touch’ are undeniably groovy. Unfortunately it seemed the collective spine of the audience had been replaced with rebar – with the exception, that is, of one sauced old bird who alternated between trying to start a mass-clap and, honestly, a Waisake Naholo chant.

But recording a live set is undeniably a weird buzz. The camera demands reaction. Cellphones were banned to avoid shots of glowing blue foreheads staring into their laps. Songs were repeated to make post-production a little easier. Fortunately Maala was a consummate professional despite the nerves and managed to hit every mark, delivering an enjoyable set that looked as good as it sounded.

The greatest casualty of the filming process, however, is the bathroom break. There was a strict one-way policy on the door and halfway through the set my bladder had swollen like an angry pimple. It was at alpine-fault levels of potential danger. Something would have to be done before I exploded, showering the balcony and stage with urine and entrails, my intestines hanging from the Town Hall’s lighting rig like grisly party streamers. As the gig wound down I slipped into the night, the inaugural MTV Unplugged a success by any measure. Long may it live.