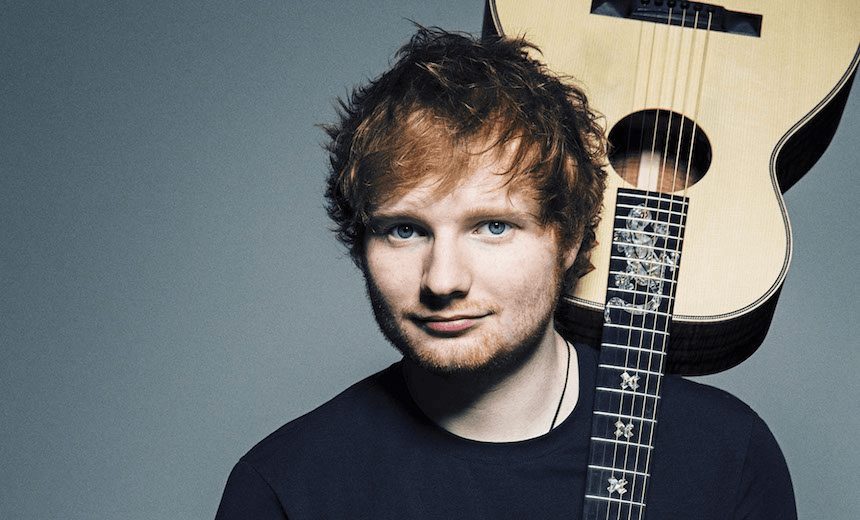 By Mitchell Houlbrooke
Guest writer
Made possible by

Last week, The Spinoff’s music editor wrote a negative review of Ed Sheeran’s new track, ‘Shape of You’. Mitchell Houlbrooke read that review, disagreed vehemently, and sent us this response.

Many people, including The Spinoff’s own Henry Oliver, are not impressed with the new Ed Sheeran single, ‘Shape of You’.

It has been variously accused of being:

I tactfully disagree. Someone has to stand up for this radio-hungry monstrosity and it looks like that person is me.

Ed Sheeran’s first album is mostly acoustic pop with occasional bones thrown to other genres. Guitar strumming and relatable lyrics are his stock in trade. He did more of the same on album no. 2, except he wisely realised he needed to get a bit of big-budget pop production on there to keep the hits coming and appealing to a wide audience. That album had some much more radio-relevant songs on it, and did deservedly well.

We’ve seen this trajectory before. This is Taylor Swift with red hair. This is Bruno Mars from London. Ed more than anything wants to make as many people happy as he can. That overrides his desire to stay in his natural ‘safe-zone’ of updated Jack Johnson tunes. All we are seeing with this track is a continued slide in that direction. And just to show he hasn’t lost touch with his roots, the other song released with this one, ‘Castle on the Hill’ is a pretty typical Ed Sheeran song, just with a more grandiose arrangement. People have rightly pointed out that that song is more one for the core fans.

‘Shape of You’ is supposed to be the hit. The track that storms its way up the charts not by brute force, but by overwhelming earworm-factor. It does so by way of the great pop trend of 2015/6, tropical house. Turned into an art form by producers like Kygo, Felix Jaehn and Robin Schulz, it throws a mountain of steel drums, congas etc. on sparse arrangements that emphasise the sweetness of melody above all. Forget bass drops, breakdowns, and epic synth rave-ups – tropical house is laid back but builds to its own type of climax using repetition and subtle layering. The quantity of songs in this style has certainly decreased lately, but does that mean Ed has missed the yacht?

Imagine if Daft Punk had heard producer Josh Ramsay reviving disco in grand fashion with Carly Rae Jepsen’s ‘Call Me Maybe’ back in 2011 and decided to not bother going down that route with their next album? We’d never witness the peak of the early ‘10s disco pop craze. Every person who has ever declared a genre as ‘done’ has been proven wrong.

On the balance of things, ‘Shape of You’ is a pretty damn good tropical house single. What it gets right more than anything is restraint. Tropical house shouldn’t smack you in the face. It should wash over you. Gently. Until the bliss is too much to take. Well, this track is a masterclass: Beginning with a percussive synth loop and some muted guitar strumming, there’s not a squelch of bass to be heard. Ed’s vocal is pretty bare until the pre-chorus, where it gets double tracked, at first at the same pitch, and then an octave up. This trick has been used a million times before to great effect. (Remember the critically-revered chorus on Smash Mouth’s Doors-inspired ‘Walkin’ on the Sun’? No?) And aside from that, precisely nothing is added to the chorus. But you know it’s the chorus. Behold the power of a well-written melody.

Throw in a more muscular post-chorus, a mercifully-brief bridge, and a slightly augmented final chorus and you have a textbook hit on your hands. Yes, the lyrics are silly, but they work well enough to not raise any uncool alarm bells with the teen demographic, and for everyone else – ignore them. How good do you need your pop lyrics to be?

I first heard this track in a social situation where I had no idea who the artist was. It was pure pop magic. It snuck itself in amongst some (actually banal) Chainsmokers and ZAYN tracks and got me while my guard was down. So before you decide you hate this track, let your guard down too. Because Ed sure as hell did making it.

Editors note: I haven’t seen La La Land, but I’ve had one scene recalled to me: Ryan Gosling, a jazz snob, says to Emma Stone, not a jazz fan, “What do you mean you don’t like jazz?” To which Emma Stone replies, “When I listen to it, I don’t like it.” That could be Mitchell and me, but about this song. – Henry