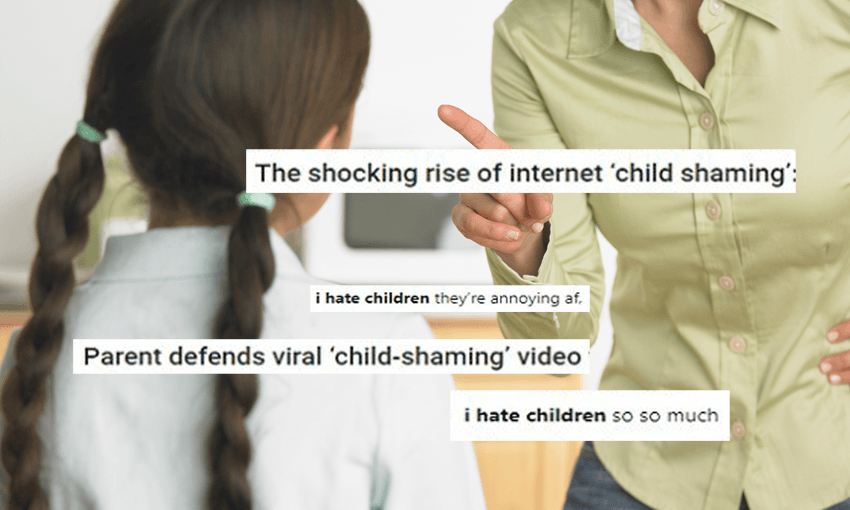 Why are we rejoicing in the punishment of children?

Child shaming and rejoicing in the punishment of children is horrible, and it’s part of a wider trend of the hatred of children becoming acceptable. Emily Writes asks what we can do to turn this shit around.

A parent, in a fit of anger, smashed their child’s iPad the other day. It’s not the first time it’s happened, so you might be wondering why it’s news.

The incident made headlines because the parent is one of those expert types, Kirstie Allsopp, best known as co-presenter of property show Location, Location, Location. She took great delight in sharing without shame what she’d done on a TV show in the UK.

She was congratulated by the person speaking to her. Others praised her “old-fashioned parenting”. She’ll continue to be celebrated by some for losing control. And let’s face it – she did. Any backpedalling about how it was all part of some lesson doesn’t wash with me. We break things in anger. We hit in anger. This is what humans do. There’s a reason why we claim differently. Deep down, I think it’s because we know it’s very wrong.

The commentary around this particular style of “discipline” or “punishment” of children was as it usually is, with lots of good on her! Kids today need to be disciplined! You could easily create a bingo card: “feral children”, “kids these days”, “no punishment”, “about time they got put in their place”, “no boundaries”, “in my day”.

There’s something about western society that really rejoices in the humiliation, shaming and belittlinging of children. We have videos of children being forced to hold signs saying they’re awful kids and they get hundreds of thousands of views. A dad drives over his son’s Xbox. A mum reads out texts from her daughter’s phone. Breaking things that are precious to children is a popular way to “teach them a lesson” on Youtube – and it’s apparently hilarious.

And people will argue that smashing a child’s iPad isn’t a big deal.

I wonder what people would say if I said: ‘My husband smashed my phone today. I was using it when he didn’t want me to. It’s OK though – I learned my lesson.’

Would that be alright? If not, what makes it OK to do this to a child? A child with less power than an adult? A child with less strength, less autonomy? A child that completely trusts and relies on the big people in their life to protect them and keep them safe?

Do they feel safe if they know anything precious to them will be smashed by the people who they love the most?

In an online mum group I left last year, a mother shared a photo of her daughter. Her daughter looked no older than five. Her eyes were so red – full of tears. Her hair was roughly shorn. She looked absolutely broken. Her mother had decided to shave her head to teach her a lesson. I can’t remember the reason now but does it matter? I thought of that little girl being held down by the first person she trusted in her life, and having her hair shaved off. I thought about that little girl being forced to stand still so her mother could get a photo to share online and have validation for her rage against her child.

And I can’t help but wonder if it’s all part of a continuum. Children are told over and over again to harden up, don’t cry, don’t be a sissy, a baby, a wimp, be a man. A Unicef report found New Zealand’s youth suicide rate – teenagers between 15 and 19 – is the highest of a long list of 41 OECD and EU countries. Do you think it’s connected?

Do you think the way we dehumanise children to the extent that somehow you’re not sure if people are talking about a dog or a human being has anything to do with our child abuse rate?

Do you think the way we insist children must be seen and not heard, must be kept out of public places, must be silent around adults, has any impact on their ability to speak out if they’re not feeling safe at home? How does that impact New Zealand’s body count when it comes to child abuse?

Is it really that much of a stretch to say that watching videos of children being punished, breaking their things in anger and being told this is “good” parenting, celebrating child shaming, ageism, the treatment of children in public, the mothers are called breeders and kids called crotch nuggets, the celebration of hatred of children is all connected?

Parenting is hard – there’s no doubt about it. It’s the hardest thing I’ve ever done.

I’ve felt so angry at my children I’ve wanted to scream at them. I’ve yelled and raged and ranted and then had to apologise. I lose my cool – most parents do. But losing your shit at your kids because you don’t have the resources is a signal that you need support. When my husband and I realised we were yelling at each other because we were exhausted, we did a crash counselling course to get tips on talking to each other kindly when you’re so tired you can’t focus.

Finding a village is also hard, there’s no doubt about that. But finding a village when it feels like a part of the population relishes in shitting on mums is even harder.

This isn’t about blaming parents for getting angry. We all get angry.

But we have a responsibility to our kids to get help with creating boundaries if we can’t do it without shaming or humiliating our kids or breaking their shit!

When you’re hurting, lashing out seems normal. It isn’t. Lashing out at your kids, breaking their stuff, humiliating them, shaming them – they’re signs you need to call on others to give you a hand.

Shaming children is abuse. Breaking something your child loves because you’re angry at them isn’t good parenting. It isn’t an effective punishment – never has been.

And this message really isn’t just for parents or people who are caring for kids – it’s for everyone. When you celebrate and rejoice in child-shaming or public punishments, or give your shitty 2 cents about it, you’re ensuring that it continues.

We all have a responsibility to protect children from humiliation and emotional and physical abuse. The repercussions of abuse can be endless.

Hurt people continue to hurt people. We see that every day.

To stop it – we all have to do our part. If you’re not a parent, don’t want to be a parent – society is a rough place. Women are shamed all the time for not having children – this is rooted in misogyny.

But it is not the fault of the children around you that you are shamed. Shaming them won’t change our society – it will just make it worse.

No matter where you are in your life – consider what you can do to stop this trend of hurting kids. There are ways we can do this together.

Looking at the way we talk about children matters. Considering what role we play in the way society views children is important.

Unpacking your views of children and how and why you talk about them the way you do is a great start in working towards a better New Zealand (and world, really) for our tamariki. Calling in people and having conversations with them about what their language means matters too. When people say they hate kids or mothers, talk to them to see why they feel that way. Consider whether you’d think it was acceptable if they called for a space without elderly people because elderly people irritate them. Would it be OK to say “I hate elderly people and their carers”? Why is it OK to say this about kids? Would you feel comfortable in joining a group where the main activity is shaming elderly people and their carers? Why then do you think it’s OK to be in a group where members comment that they enjoy reading bad things that have happened to children? What are you doing to challenge the toxic culture that suggests it’s edgy and cool to hate small vulnerable humans?

When you’re organising an event, if it’s appropriate, consider if you can make it child-friendly. Consider that the world is set up to be difficult for children to navigate. Ask what you can to do make their lives a little easier.

Talk to the children around you – celebrate them, delight in them. The child you speak kindly to might not have had anyone speak kindly to them in a long time. Treat children the way you wish to be treated.

Remember, children are listening. Wherever you are. I have had people literally joke about “hating” children around my children. Imagine how that feels for them? How would you feel if people openly talked about hating people like you?

Create the kind of world where kids feel safe. You have the power. It’s time to use that power for good.