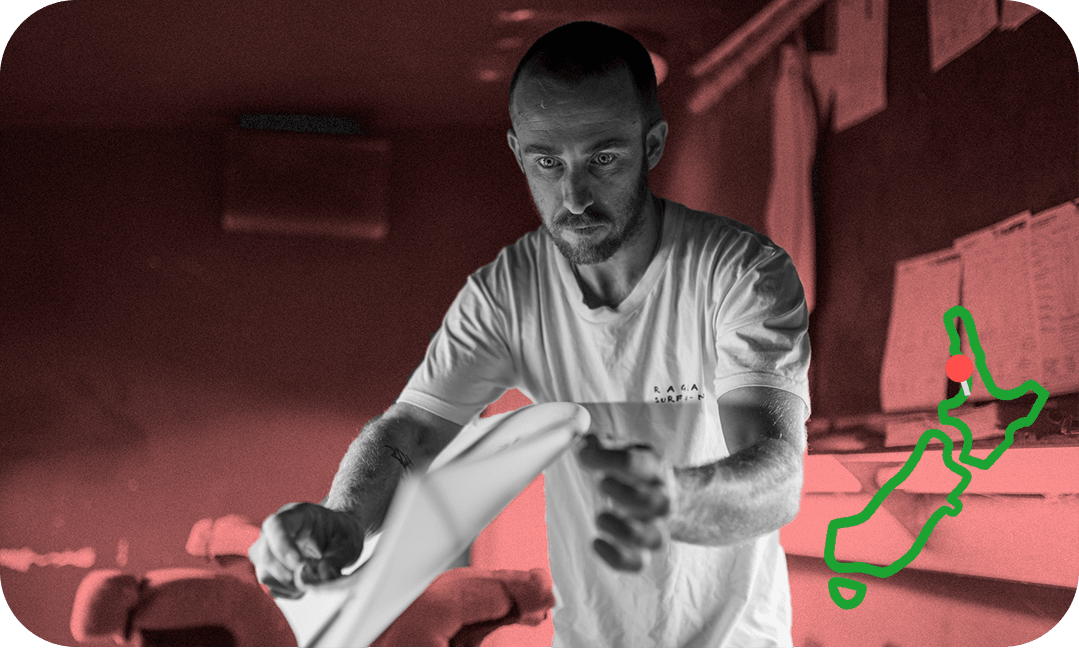 In this story from the Electric Highway, Don Rowe visits a stalwart business in his hometown to learn how regional Aotearoa is growing and changing.

For decades the small Waikato town of Raglan has been in flux. In the early months of the new millennium, after the clocks ticked over and planes didn’t fall from the sky, the New Zealand Herald published a story breathless in disbelief at former All Black Josh Kronfeld’s “architectural statement” in Whale Bay, rumoured to have been worth around $400k. Today, that money wouldn’t buy you a car park outside.

Every time I go home, there are new houses, new shops, new cars. As I pulled into town in the BMW iX, I was pleasantly surprised to see there’s even an EV charging station outside the old town hall now. But as consistent as Manu Bay’s world famous left hand surf break has been the Raglan Surf Co, which celebrates 30 years in business this year.

Founded by legendary board shaper Craig Hughes and wife Liz in 1992, the Surf Co has survived Raglan’s notorious seasonal fluctuations, increasing gentrification and the difficulties of Covid-19 to remain one of the most enduring family-owned businesses in town. And with its continued existence has been a preservation of the values that make Raglan such an iconic surf town, even as the population has exploded.

“In 1992, on a quiet day, you could see the tumbleweeds blowing through,” says Liz. “If you went to a cafe you could have a white bread sandwich and a cup of instant coffee – which I did quite regularly.”

But everything changes, and year-on-year the crowds began to grow. Access to the internet became ubiquitous, the word was out, and online surf reports and webcams made deciding whether to paddle out as convenient as a click of a button – despite the efforts of some locals, who from time to time took the cameras out of operation.

“I’ve got a sneaking suspicion as to who may or may not have done that. You could say, well, that’s really selfish, but you know, when everything is done for you, you don’t earn your brownie points in getting to a position that gives you some sort of qualification status, reading the isobar and learning about the ocean.”

The original Surf Co was both a workshop and retail store, unmissable on the main road from town to the beach. Craig worked out back, drawing on his own love and experience for surfing to create custom boards with a reputation for quality and attention to detail. “He had the sensitivity which makes a good shaper, that makes a good sculptor, that makes a good artist,” says Liz. “When you have the knowledge behind it because you actually walk the talk and you know what it feels like to do an incredible reo or a floater or a full cutback, you know what surfers are looking for, and you also understand the aquadynamics as well. I think creativity comes from the same place of love. And it’s a gift.”

Luke Hughes, the oldest of the three Hughes kids, is a successful but self-effacing competitive surfer in his own right. Growing up in the shop, he picked up the trade by osmosis, inheriting Craig’s principles of shaping, as well as expectations of quality.

“We’re in a small community in a small country,” he says. “And, you know, quite often I’m out surfing with the people that I’ve made boards for. It was the exact same thing for Dad. He would be out surfing with the guys and girls that he’s made boards for, and he could see how much enjoyment his craft was able to give people. And for him that was the motivating factor.”

But in 2013, after a decade-long battle with cancer, Craig Hughes passed away. Hundreds of mourners packed the Raglan School Hall, lining the room with old Hughes custom boards. The family were left grieving the loss of a dad and husband, but also with the task of continuing his legacy, and that of the shop.

“You’ve gotta be resilient, you’ve gotta have a bit of staying power and grit,” says Luke. “You’ve gotta roll with the punches. I feel like we as a family learned that pretty early on when Dad was diagnosed with cancer. Obviously that was a shock to the system – he’s the keystone of our family, who has been diagnosed with a terminal illness. There were a lot of conversations about the longevity of the business, the big picture, the succession of it all.  He was the fundamental player in that equation.

“And therefore when he was removed, there was gonna have to be significant change for us to continue. It wasn’t just that dad was sick, it was the fact that if we don’t do anything, the future of business… it’s our livelihood. It is who we are. It’s what we do. That was all at risk.”

The Hughes family realised that in the increasingly crowded retail market, the way forward was to play to their unique strengths: community, reputation and authentic lived experience. Where any of five different shops might stock Levis, only Raglan Surf Co sells the iconic Raglan Surf Co merch and Hughes custom surfboards. Relationships with suppliers, established when Luke was just a grom at domestic surf tournaments, could be leaned on. And with the entire family still actively in the water, the sense of community spirit remained prevalent in Raglan.

“It is as much a lifestyle as it is a profession for not just me, but our whole family. I guess that’s something that complements the fact that we’ve been here for 30 years, because we’re not just turning up to the day job and that being it, you know.”

In 2017, Raglan Surf Co moved a few doors down the street to what locals know as the Vinnie’s building, named after an institution of the aughts and one of the oldest structures in town dating back to the 1800s. Craig had had his eye on the place for years, says Liz, but converting the space in practice was difficult. Daughter Ariel took time off university to help, as the shop added a coffee bar with prime people-watching views and doubled down on providing the real Raglan experience.

While the shop has moved, and the boards are now shaped in a workshop at home, the Hughes legacy is being established for the next generation to carry on.

“Luke holds the reins now,” says Liz. “Luke is the one that has enabled us to carry on because of his hard work and his common sense and his own gifts. And you know, that the feelings of doubt he must have had, ‘my father’s got such a huge reputation, I’ve got huge boots to fill.’”

“But at its heart it’s all surfing. It’s totally about surfing. That’s who we are.”