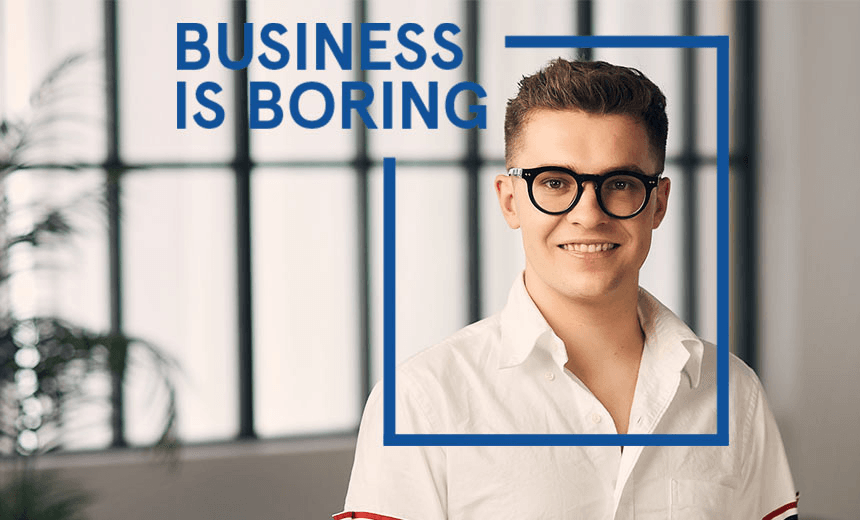 Business is Boring is a weekly podcast series presented by The Spinoff in association with Callaghan Innovation. Host Simon Pound speaks with innovators and commentators focused on the future of New Zealand, with the interview available as both audio and a transcribed excerpt. This week Simon talks to Jake Millar, CEO of entrepreneurship-focused video company Unfiltered.

Prime minister John Key visited the scene and Jake wrote to thank him. A hand-written note reply came from the prime minister who wanted to meet Jake, away from the media. As someone who had also lost a father young and gone on to great success, Jake credits this meeting and example as part of what’s led him to go on and do what he’s done.

And what a lot of that there is, already.

Always entrepreneurial, Jake became driven. He set goals and got them. Head boy of school and house, check. He landed a $40,000 scholarship and then rather than take it, he took advice from a book by Sir Richard Branson that said “Screw it, Let’s Do it”. He gave the scholarship a miss and started a company that months later he was selling to the New Zealand government.

His second venture, Unfiltered, sees him travelling the world, spending most of his time in North America, talking to business leaders about how they succeed, and selling it to people and great companies all over the place. It’s going great guns and backed with serious investment. He’s even interviewed Sir Richard Branson.

At 22 he’s just getting started but already giving back. He’s in New Zealand doing fundraising for Lifeline, raising 55 thousand dollars with a charity dinner. In conversation with Simon he talked career, what it takes to succeed and giving back, right from the get-go.

I think we did it probably too early, to be honest. I don’t regret when we did it, but it was definitely very early on in the journey. And that was because I always wanted to build a US company and take it offshore. I’ve always loved America and wanted to spend more time over there. I had this idea and I really wanted to take it there. I remember I went on an experiment called Think Week, which was Bill Gates-developed: take a week out from your business and spend it in nature, thinking and reflecting.

I was reading Richard Branson’s book again at this point, maybe two years after I read it for the first time, and thinking “man, I’ve gotten a bit safe.” Everything was a bit easy: the business was going well, I was living in a nice place in Auckland. It was just a bit easy. I remember thinking I needed to disrupt my normal and take a big risk.

I went back to Auckland and I got on Skype with a guy called Stephen Jennings, he’s a New Zealander who’s built cities in Africa and investment banks in Russia. I was talking to Stephen and he was like “you’ve got to get into a bigger market” and I was like yeah, that’s a good idea. I just booked a one-way ticket to San Francisco and thought “I’m moving”. It was a month away. I realised afterwards that you actually need a return ticket to get back into the country but I made the decision to move to America on the spot. When I say “move” I mean go over and spend a large amount of time over there really trying to expand this business into the US market. That was probably only six month after we launched Unfiltered, maybe even less. I just went over and made a start.

Good. We’ve got an office up in New York and from a content perspective it’s becoming easier and easier because we’ve filmed some amazing interviews recently and it’s just getting a lot easier to secure these incredible interviews in America. I think last time we were over there we filmed five founders of billion-dollar unicorn companies within the space of about a month. And these are all companies that were founded within the past five to ten years that have grown into incredible companies. Those interviews are hard to get because these people get hit up all the time and we filmed about five of them in the space of a month so that just gives you an idea of the access that we’re getting, which is amazing.

We’re heading over next Sunday and we’ve got an interview with Kimbal Musk, Elon Musk’s brother, for an hour. We’ve got Sara Blakely, we’ve got Brad Keywell, who co-founded Groupon and Uptake and many billion-dollar companies. So we do have some incredible interviews coming up and it’s just becoming easier to get these interviews which is awesome.

Tell me about access. Because in many ways, what you’re doing here is the same thing you were doing at Christchurch Boys High, where you were providing access to the most inspirational and interesting people that you could get hold of. What did those first times of jumping on the phone and trying to call people, of just reaching out, teach you? And what are you still doing now?

If I look back to the very early interviews we had, it was so hard. Everybody’s getting hit up for interviews. Everybody wants to interview these really successful people and they have to choose what they say yes to. When you’ve got nothing to really show them it’s so easy to say no to it. But we got our first few through relationships, persistence. I mentioned the speakers programme I ran at the school. That was so helpful because so many of those people I’d built relationships with. So I was able to pick up the phone to Don Brash and Rhys Darby and all these people and say look, can I just do another interview with you to digitalise what we did at school? And all those people said yes. That provided me with my initial base.

If I had interviews, for example, with Elon Musk, Oprah, all these amazing people, and then went into the US now with another ten Bransons on the site, we could probably pretty much get anyone we want. Everybody wants to be in that company. It literally is that easy, quite often. People want to be in the company of other influential business people. If we approach people, they generally really want to be a part of it, they generally know about us already. We don’t have to do the big spiel as to why they should do it anymore. We just say “We’re Unfiltered, this is what we do and do you want to be a part of it?” And generally it’s a yes. So I think that’s what we’re building towards in the US. It’s all about a track record, it’s all about viewership, about who else is doing it, is it reputable: all those things.