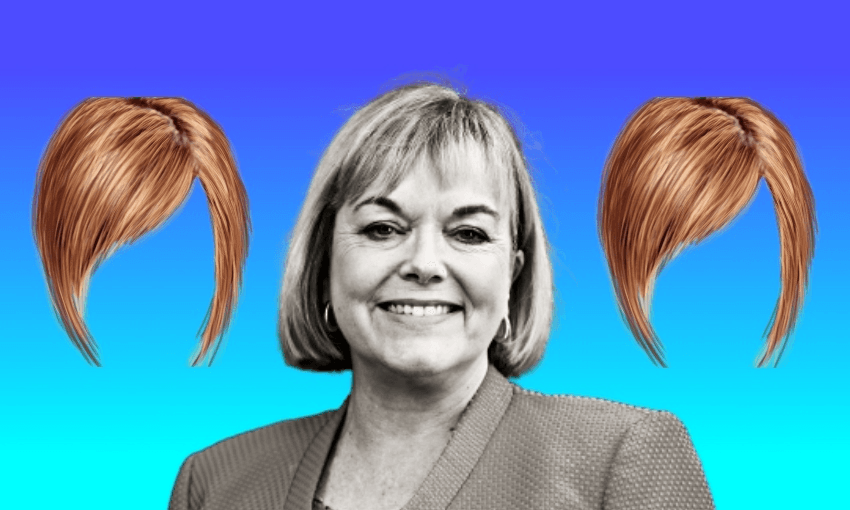 Collins and the Karens.

Collins and the Karens.
Opinion

Fresh on the heels of heated debate in the New Zealand House of Representatives, The Spinoff investigates.

How many of you have ever felt personally victimised by someone calling you a Karen? How did it make you feel? Did it make you want to call the police? If it did, lo and behold, they were right.

But as Judith Collins found out this week, being called a Karen does not a victim make. With new hate speech laws currently being proposed by the government, Collins raised the question on every middle-aged white woman’s lips: “Will calling a middle-aged white woman a ‘Karen’ now be a crime under Jacinda Ardern’s law?”

Collins got an answer from the prime minister during question time on Wednesday. “I also, as it happens, disagree with [Collins’] statement on Twitter that somehow it will become illegal to call someone a Karen,” Ardern said. “That is absolutely incorrect, and I apologise, that means these laws will not protect that member from such a claim.”

Labour MPs erupted with laughter, Ardern sat down triumphantly, and Collins doubled down.

“Apparently insulting women for either being named Karen and/or for being middle aged white women is fine, under Jacinda Ardern’s new law,” she tweeted.

Calling someone a Karen isn’t illegal and the proposed strengthening of hate speech laws won’t change that. So with the law on my side, I set out to answer the question on everyone else’s lips:

Before we assess the evidence, some background. A Karen is loosely defined as a middle-aged white woman who needs to speak to the manager, though of course anyone can be a Karen. A Karen is essentially a form of narc: asking to speak to the manager, demanding that strangers answer your nosy questions, and calling the police on people (usually people of colour) who are just trying to go about their day.

Being a Karen of sorts is a requirement for opposition MPs. The very nature of the role is to find faults in the service that the government is providing and demand to speak to the manager aka Jacinda Ardern. David Seymour is the biggest Karen in parliament, but this investigation is not about Seymour because Seymour didn’t bring it up.

In the same vein, not everyone named Karen is a Karen. The Spinoff’s accountant is named Karen and despite literally being “Karen from accounts”, she’s the least Karen in the entire office. ACT MP Karen Chhour being named Karen doesn’t automatically make her a Karen. But sending out a press release demanding that the prime minister “apologise to every Karen from the Cape to the Bluff” absolutely does.

Karen tendencies can be found in each and every politician and that’s something for them to think about in their own quiet time.

But back to Collins.

Collins fits many of the stereotypical descriptors of a Karen. The name itself reached peak popularity as a name for newborns between 1957 and 1965. Collins was born in 1959. Karens are typically white. Collins is white, despite knowing a few Sāmoan words. But most importantly, a Karen is someone who has privilege and power and who uses them to respond to perceived wrongs at a level that is disproportionate to the thing itself.

There are many valid concerns to be raised regarding the proposed hate speech laws, which were a response to 51 Muslims being murdered in a terrorist attack. Seeing the words “hate speech” and thinking “Karen” is a hallmark of Karen culture.

‘I am a woman of colour’

In 2019, Collins reached across the political aisle to support a ban on female genital mutilation but in the process referred to herself as “a woman of colour – the colour white”. Supporting a good cause is great. But inserting oneself into an issue that doesn’t affect you personally and somehow bringing your whiteness into it? *That’s amore voice* That’s a Karen.

‘Is there something wrong with me being white?’

When asked in 2020 if Collins was concerned that National’s front bench was looking a bit monoethnic, Collins replied, “is there something wrong with me being white?” Reframing a valid question into a perceived slight on one’s own ethnicity while also being in the best position to address the problem raised? You got it, that’s a Karen.

‘Demonised for my ethnicity’

The next day, Collins defended her earlier remarks by saying she is “someone who is utterly sick of being demonised for my ethnicity thank you very much”. See above for the ruling on this one but bonus Karen points for ending a sentence with “thank you very much”.

‘My husband is Sāmoan’

So talofa. It was the greeting heard around the world, and by world I mean New Zealand, and by New Zealand I mean my head for the past nine months. I cannot get that line out of my head. Help me fa’amolemole. Collins, during a 2020 election debate, responded to a question that happened to be asked by a Sāmoan student, with “I understand actually, my husband is Sāmoan, so talofa.” What a moment. When people (myself included) made fun of Collins for her clunky attempt to use her husband’s ethnicity for brownie (lol) points, she retaliated, saying she was disgusted by the insinuation. “I thought, how dare people try to disrespect my husband like that,” she told Tagata Pasifika. No one was disrespecting Collins’ husband but she had once again used him as a shield against her own racial insensitivity. By my calculations, that’s a Karen.

If I couldn’t read I’d assume this has “live, laugh, love” typed all over it. I can’t explain it but National’s new “values” banner holds a strong energy of she-who-shall-not-be-named.

Having carefully weighed up the evidence and free from fear of being arrested on the spot, I hereby declare Judith Collins a Karen. And in doing so I will have no impact on her life, career aspirations, or livelihood. She will continue to be an extremely highly paid and powerful person with a platform to say more ridiculous things, because that is the privilege of being a Karen.