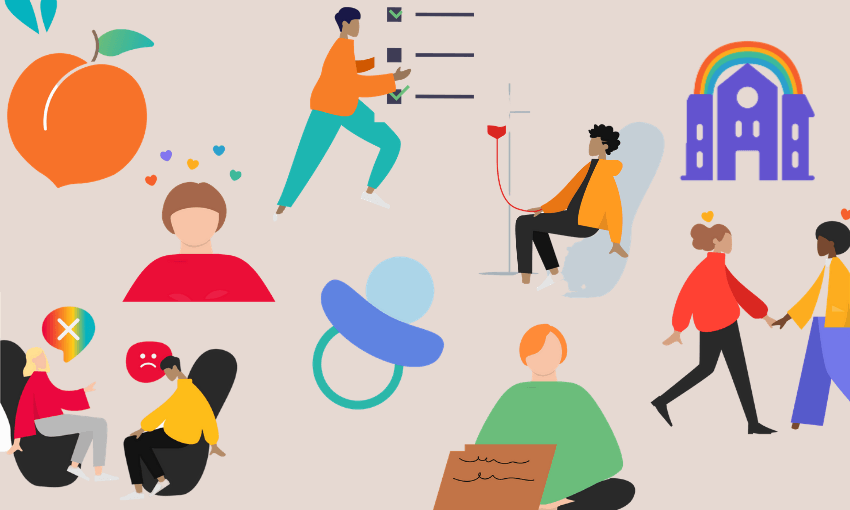 Rainbow Election 2020 highlights LGBTQI+ issues – and a lack of policy

Just because few parties have released LGBTQI+ policies doesn’t mean the rainbow community won’t hold them to account. A new policy tool highlights the rainbow policies that matter this year, and which parties support them.

“For Queer people, politics is personal – we neither have the luxury nor privilege to keep our lives outside politics.”

If you take a look at Policy NZ’s overview of New Zealand’s political parties, you’ll find that only two have so far released policies directed at the rainbow community: the New Conservatives want to require transgender students to use bathrooms based on their assigned gender at birth, while the Greens want to ban conversion therapy. But when it comes to National, NZ First, the Māori Party, The Opportunities Party, Act, and Labour their slots remain glaringly empty.

So how are members of the rainbow community, their friends, whānau and allies expected to make informed political decisions? It’s a community that’s often felt disenfranchised and misrepresented by politics, and there’s just not a lot of research on rainbow community engagement within these spaces.

Frustrated by the lack of discussion of rainbow policies leading up to the 2020 elections, university student Jess Dellabarca and recent graduate Noor* have launched Rainbow Election 2020, a policy tool designed to highlight some of the most pressing issues faced by New Zealand’s LGBTQI+ community.

The Spinoff: How did the two of you get started on Rainbow Election 2020?

Dellabarca: Noor and I are part of Rainbow Law, a student club at the University of Auckland. Projects like this are the reason I went into law school. I think lots of people go into law school wanting to do human rights, wanting to fix everything … and then they graduate and do a corporate job. So it feels really worthwhile to be able to use those skills for a community project.

What groups are you hoping to engage with through this tool?

Noor: It’s a two-tiered approach. We’ve noticed a rise in rhetoric of “we gave the gays marriage, what else do they want?”. The website is for the general public to understand the issues that continue to affect the rainbow community and find ways they can help such as lobbying local MPs.

But we also want to highlight these issues to politicians and those in power and say: “Hey! This is something you can actively work on. We are literally giving you solutions and suggestions in collaboration with other organisations that have the expertise and lived in experiences”.

This is a wake-up call to politicians. We want them to go, “oh crap we should do something about it”. So far, only two political parties have released their policies on the rainbow community.

We’re a month and a bit away from the elections. What’s been happening in terms of policy for the rainbow community?

Noor: It’s been quiet, it’s been slow. We’ve still got the pandemic going on in the background. But even though we’ve been in a state of emergency, we really want to get the conversation going.

Jess and I attended a Rainbow Youth event with a panel of politicians speaking on rainbow issues. Only some of them said that they’d even thought about it and [explained] what they’d advocate for on rainbow issues. The other half were there to listen and learn from the rainbow community. While we would’ve hoped for something more substantial, we appreciated that they recognised the limits on their experience and took the time to listen.

Originally we wanted our tool to look like [something that shows how] Labour supports this, National supports this. But from looking online at the policy documents on their websites and contacting the parties, it just wasn’t something that’s on the radar for them. At the moment, there’s just not enough drive and commitment for the rainbow community in this upcoming election.

Dellabarca: We’ve sent out so many emails. Apparently Labour is coming out with a policy soon, but they said this to us a month ago. The Greens replied, and while NZ First and the Māori Party acknowledged they received our emails, it hasn’t gone up the funnel. There hasn’t been any substantial action from any political parties we’ve been in contact with.

What are the policies and issues you want to highlight with the new Rainbow Election 2020 tool?

Noor: We’ve got 15 policy issues in total and they’re set up in four categories: legal, health, education and community. And within those, there are three we’d really like to see a focus on: banning conversion therapy, gender-affirming healthcare and improving accessibility of mental health services for the rainbow community.

What’s an issue that not a lot of people are aware of?

Dellabarca: Medical intervention of intersex babies. Intersex community issues are often ignored, even in the rainbow community. But we know that invasive medical procedures are performed on intersex babies in the first few years of their life. Of course, they’re unable to consent and parents are also not given enough resources to make an informed decision for their kids. Overseas and New Zealand research shows that this procedure is really harmful, invasive, it isn’t medically necessary, and there are often difficult and awful long term consequences from it.

There’s a lack of information, statistics, and research on the rainbow community in general. Is this something that has affected your research?

Noor: A lot of the data including how many people identify as LGBTQI+ in New Zealand is quite outdated. If we look at overseas studies, the population is increasingly more open to fluidity in their sexuality and gender. In the US, only 48% of Generation Z identify as strictly heterosexual, compared to 65% of millenials. However there has been no study conducted in NZ. So even if it’s a relatively small population right now, it’s only going to increase. It’s important to protect these communities now so in the future we aren’t shooting ourselves in the foot.

In terms of statistics, it’s really limiting. It is about recognising that the community is very diverse, so for example when it comes to homelessness experienced by the rainbow people, the barriers faced by some who are takatāpui would be different compared to someone who isn’t.

Which rainbow organisations have you collaborated with? As you mentioned, New Zealand’s queer community is a very diverse one. So how do you determine the best solution for these issues?

Dellabarca: We made a very considered effort to collaborate with as many organisations as it was possible. We want as many different people that fit under the rainbow to be represented. There are 13 organisations [including Inside Out, Gender Minorities Aotearoa, and Te Ngākau Kahukura] that we worked with to make sure policies fit the diversity.

At multiple stages throughout the process, we’ve gotten in contact with individuals and organisations to make sure, for example, that we’re using the correct language to best represent that community. We also want everyone to better understand why these policies matter and why people should be voting for the rainbow community, even if they themselves aren’t part of it.

What do you hope changes from this policy tool?

Noor: Ideally we’d want cross-party recognition of rainbow issues. Our bottom line is that we want public awareness across the board on the number of issues there are still affecting the rainbow community. And hopefully, this will be a wake-up call to political parties that they need to implement some policies. That can’t say it’s not just not a big deal because we’re not that large of a voting block

Anything else to add?

Dellabarca:  It’s been incredible seeing the community response from this tool. We crowdfunded the launch of the website and we reached our target so quickly. The response from the rainbow community has been so positive and everyone we’ve spoken to have agreed that there is a gap in rainbow-specific policies.