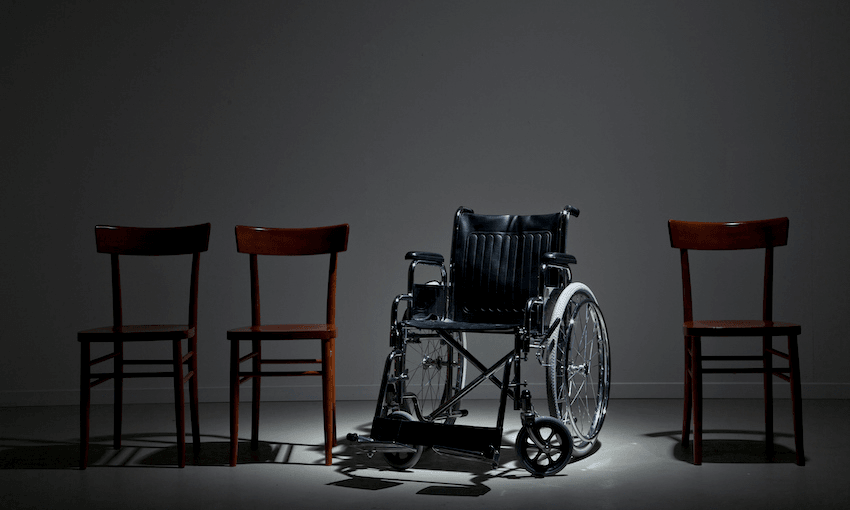 Disabled people like me need more than lip service. We need politicians to show up

The disability community should stop making excuses for candidates who don’t take the opportunity to hear from us directly – and that includes the prime minister herself, writes disabled journalist Michael Pulman.

This time four years ago, forums promoting the disability vote gave the politicians who showed up a chance to hear directly about what they could do to improve inequalities faced by the disability community – one that encompasses over a quarter of the total population.

These forums were nothing new, but they gave those who spend their lives tirelessly advocating for the rights of disabled people an opportunity to speak. And they led to some truly stirring moments. Few of us who were there that day in Auckland, for example, could forget when fearless advocate Dr Huhana Hickey grabbed the microphone and gave politicians what-for about how the housing crisis was further growing the divide between the disabled and general population.

But sadly, little from those forums in September 2017 got much over the line. Disabled people got to say their piece, and then a week or two later they cast their votes. Now,  three years later, the disability community will soon be talking again about how their voice matters. Already invites are going out to MPs, requesting their presence at events designed to put disability on the agenda this election.

The impetus is now back on the politicians to show up. This is not the time to be making excuses for those who don’t make the effort, even if one of them is the prime minister herself.

To be clear, I’m not suggesting Jacinda Ardern hasn’t been an ally to some in the disability community. She’s appeared in videos practising sign language, and promoted IHC’s IDEA Services during the lockdown, for example. It would be inaccurate to say she’s done completely nothing.

But there is a big difference between appearing on a video screen and actually speaking directly to disabled people who feel marginalised by the very systems the government claims to be putting in place to promote equity.

Remarkably, there are still some within the disability community itself who make excuses for Ardern’s silence – most commonly with the “she’s very busy” line. John Key didn’t get the same pass, nor did Helen Clark before him or Jenny Shipley before her.

Are we judging Ardern fairly or are we simply backing the political brand we pin our hopes on? If we are doing the latter, brace for another three years of uncertainty.

Try to make that same “too busy” excuse to disabled people who struggle to even get out of bed in the morning because they don’t have someone to help them into the shower. Try making it it to the mother of a disabled teenager who battles the schooling system on a daily basis so her child can get a fair go.

Listen to the disability community and they’ll tell you: all they want is an acknowledgment, and maybe just five minutes of Ardern’s time so they don’t feel like they only matter to the MP with the relevant portfolio.

To excuse the prime minister as “too busy” smacks of fandom, of a voter who has climbed happily, unquestioningly on board the Jacindamania hype train. But it goes deeper than that. New Zealand’s disabled community makes up over a quarter of the population. That’s over a million people in the “team of five million”. While not all are eligible voters, and many will choose not to participate, that’s still a hell of a lot of potential votes – perhaps even enough to tilt the election one way or another.

If you want to look at it purely from a political perspective, why wouldn’t the PM see the incentives on offer here? Why aren’t her people bending over backwards to make time for an appearance or two?

I sense that any reluctance on her part, or at least on her office’s part, could be down to discomfort about their own lack of awareness in this area. Call me crazy, but that could well be a good thing. The disability community would absolutely rejoice at hearing the prime minister acknowledge that more work is to be done to make society more equitable for them, to say that further work is to be done for New Zealand to adhere to the Convention on the Rights of Persons with Disabilities (CRPD).

Even if just for a few fleeting moments, the boost from such statements would be enough to show New Zealand’s disabled that the government actually hears them. Silence from the prime minister, on the other hand, will only re-enforce the impression that few in the Beehive place much value on those living on the margins, particularly those close to the poverty line.

Let’s hope that we aren’t having still this conversation in September. By then it will be too late.