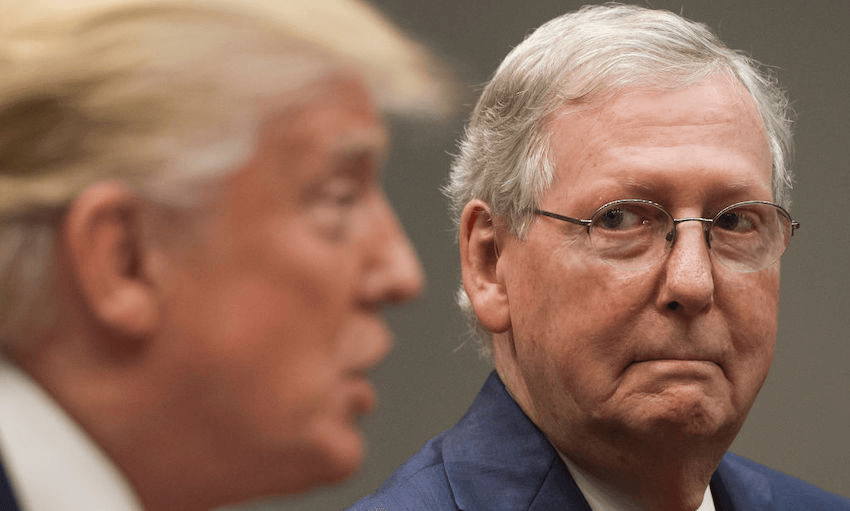 Why the US Senate matters, and why this election spelled disaster for Democrats

The Democrats started this week high on hopes for winning Senate elections up and down the map. It didn’t quite work out that way, as Catherine McGregor explains.

Hooray! President Trump is about to be booted out. That means things are going back to normal, right?

Not so fast. There’s no doubt a Biden presidency will make the US government more competent and less terrifyingly corrupt, and his wide-ranging executive powers will go a long way to undoing the damage of the last four years. But in a surprising turn of events, his ability to implement sweeping reforms is set to be severely constrained, and it all comes down to what’s happening in the Senate.

The Senate. That’s one half of the government’s legislative branch, alongside the House of Representatives (“the House”). Between them, the House and the Senate draft all legislation, and laws must pass votes in both chambers in order to become law. The Senate also has a number of exclusive powers, including the approval of cabinet officials and federal judges (including Supreme Court judicial appointments) who have been put forward by the White House.

Those powers – to pass or vote down legislation, and to approve or deny key government and judicial appointments – give the Senate enormous control over how the next four years will play out.

Going into the election, the Republicans held the Senate 53-47. Under Republican control, the Senate has been widely criticised for failing to pass much meaningful legislation beyond a massive tax cut for corporates and the ultra-rich. In fact, the current Senate term has been characterised by inaction – except when it came to approving hundreds of mostly under-qualified, uber-conservative judges to lifetime appointments, culminating in Amy Coney Barrett’s appointment to the Supreme Court last month.

And the Democrats were hoping to change that?

Indeed they were. This election, 35 of the Senate’s 100 seats were up for election; promisingly, most of those were Republican-held seats, putting Democrats on the offensive. As polls showed Republican senators underwater in races across the nation, this seemed like a prime opportunity for Democrats to make a net gain of at least four seats, thereby winning control.

With control of both the House and Senate, the Democrats hoped to pass a raft of legislation including immigration reform, coronavirus relief funding, gun control laws and voting rights expansion, while setting the wheels in motion for even more ambitious changes. Many expected an early vote on eliminating the filibuster, a 60-vote threshold that makes it almost impossible to pass major legislation through the Senate (though the filibuster itself can be eliminated with a simple majority vote). Others were pressing for a vote on expanding the Supreme Court, a move that would counter the strong conservative majority created by Trump’s three judicial appointments. There was even talk of finally granting statehood to Puerto Rico and Washington DC – both of which would likely be reliably Democratic strongholds for generations to come.

Which seats did the Democrats hope to pick off?

They started 2020 with a handful of vulnerable Republican incumbents in their sights, including unpopular Trump ally Thom Tillis in North Carolina and the famously mealy-mouthed Susan Collins in Maine. As polls showed Republicans’ fortunes fading on the back of Trump’s disastrous Covid response, Democrats widened their net, eyeing seats in South Carolina, Iowa, Montana, Georgia and even Texas.

With their electoral map continuing to expand, Democrats dared to dream of a future with both legislative and executive branches under their control – Senate, House and presidency.

The problem with big dreams is that it hurts that much more when they don’t come true. Republicans’ unexpectedly strong showing this week not only dashed Democrats’ hope of a Biden landslide, but also to a Senate no longer under the control of the smirking, cynical Mitch McConnell. Despite record-shattering small-dollar fundraising – much of it from Democrats furious about Coney Barrett’s last-minute appointment to Ruth Bader Ginsburg’s Supreme Court seat – Democrats failed to make the gains the polls had suggested were theirs for the taking.

In South Carolina, Jaime Harrison spent more than US$130 million failing to unseat never-Trumper turned Trump-toady Lindsey Graham; in North Carolina, a late-breaking PG-rated sex scandal appears to have put paid to Cal Cunningham’s hopes of replacing Thom Tillis (though this race is still yet to be called). Most shockingly, in Maine, Susan Collins defied months of disastrous polls to retain her seat.

Democrats did make two pick-ups. In Arizona, Republican Martha McSally, appointed to John McCain’s seat after his death in 2018, lost to former astronaut Mark Kelly; in Colorado, popular former governor John Hickenlooper easily beat incumbent Cory Gardener. But with Doug Jones failing to hold onto his seat in deeply conservative Alabama, the Democrats ended the night with a net gain of one, and Mitch McConnell lived to smirk another day.

So that’s that, then?

Well, not quite. An unusual sequence of events has provided the Democrats with a hail mary in the state of Georgia where, due to a vacated seat, there were two Senate races this week: the regularly scheduled contest between Republican incumbent David Perdue and boy-wonder challenger Jon Ossoff, plus a special election, where Republican Kelly Loeffler ran against an open field including Democrat Raphael Warnock. Under Georgia state law, a Senate candidate needs to achieve 50% of the vote to win. In both races, that appears not to have transpired, meaning Perdue and Ossoff, and Loeffler and Warnock, are likely heading for runoff elections in January.

Wins by both Ossoff and Warnock would give the Democrats 50 seats – and that’s enough for control, since Kamala Harris’s vice-presidential powers include the ability to break a Senate tie. With control of the Senate in the balance, these are set to be two of the biggest, ugliest, and most expensive Senate races in US history.