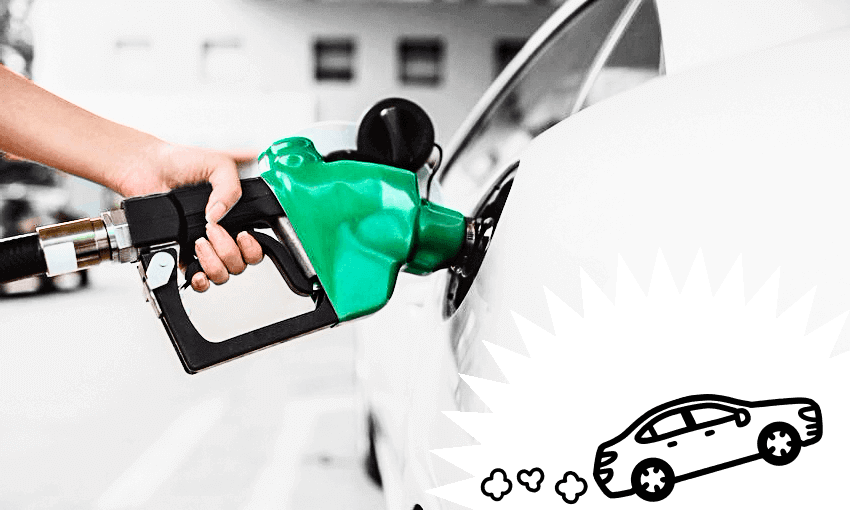 What’s up with the price of petrol?

Petrol prices are soaring to new highs across the country. Stewart Sowman-Lund finds out what – or who – is to blame.

I bought a Honda Fit because I thought it would be cheap and, for about two years, it was. Filling it up from nearly empty was about $60-$70 and as a student at the time, I was content with that.

But since the middle of last year, around the time we went into lockdown, things have changed. Now, the closest petrol station to my house in east Auckland has 91 unleaded sitting around the $2.70 mark. According to Gaspy – an online tool that lists nearby petrol prices – I could maybe get it for around $2.50 if I headed out west but even then that is hardly cheap. And if I need to urgently fill up after work, the Mobil down the road from The Spinoff ‘s office is currently sitting on a chill $2.80.

If you pay for premium fuel, like 98, you could easily be paying more than $3 per litre at the moment.

It’s now about $100 to fill up my little hatchback and before the DMs flood in, I just can’t justify splashing out on an EV or even a hybrid right now. Petrol – like everything – seems to be getting more and more expensive. So what’s up with that?

In 2020, facing similar pressure over the growing pain at the pump, the government pledged to pass legislation that would increase competition and drive prices down. It was prompted by a Commerce Commission report into the fuel market and, according to Jacinda Ardern, would “break the stranglehold” enjoyed by big fuel companies.

Then-commerce minister Kris Faafoi said the rise of discount retailers like Waitomo and Gull would help generate competition. “We have a local example here [in Wellington] where Waitomo petrol came to town earlier this year and they dropped their prices by 32c a litre and, mysteriously, 24 hours later their competitors did too,” said Faafoi.

His other example: “When Gull came into Wellsford and prices dropped by 18c a litre.”

Faafoi estimated that those price drops – of 18 to 32 cents per litre – would be replicated across the country.

I put this to Faafoi’s successor as commerce minister, David Clark. He told The Spinoff that prices dropped by around nine cents per litre on average as a result of government action in 2020. “This means a family filling a 50-litre tank with petrol once a fortnight would have saved around $117 a year,” he said.

Those declines were brief, however. Prices have now climbed back up above where they were before the market study. “The government recognises that petrol prices are high,” Clark said. “However, this has largely been due to increases in global crude oil prices which have been experienced the world over. It is not necessarily indicative of retail fuel margins or anti-competitive behaviour in the sector, which was the focus of the Commerce Commission’s market study.”

Clark said the government was concerned with more than just petrol prices. The market study led to better accessibility of fuel terminals, he said, and saw Gull expand its services to the South Island. The Fuel Industry Act 2020 was also introduced, making it mandatory for retailers to clearly display fuel prices of all grades of fuel from this month. “This will help consumers make informed decisions about what price they’ll pay at the pump.”

During an interview with Newshub’s AM this morning, prime minister Jacinda Ardern acknowledged that fuel “prices are high”. However, she said the government had not – and would not – make it worse. “Cutting healthy spending is not the way to resolve the issue of inflation that we are seeing many of our counterparts experiencing as well.”

Provisional statistics from the Ministry for Business, Innovation and Employment, which routinely tracks petrol prices, would suggest that fuel companies might in fact be taking more than their fair share. That claim’s been roundly rejected by the retailers themselves, although MBIE’s stats show a steady rise in importer margins over the summer period.

AA’s fuel prices spokesperson Terry Collins says the real issue is the cost of bringing fuel into the country in the first place – and it’s not entirely fair to blame the government for prices rising, either.

There are multiple elements involved. First, the price of getting the refined product – that’s the cost of oil, shipping and refining. “That’s an international price driven by supply and demand and availability,” said Collins. The second component is domestic tax and excise and levies, which make up about $1.25 of a litre of petrol. “The only bit that’s been moving is the ETS, which has increased from around eight or nine cents per litre to around 16 cents as the price of carbon goes up,” he said.

The final component is the margin: that’s the profits for the wholesalers and retailers who have to store the fuel, transport it and then sell it. While margin may be nudging up, it really comes down to the international market: “We’ve had our highest landed prices in the past year. There’s an international energy shortage, prices are going up, and there’s a constraint on supply.”

As for the government’s desire to bring prices down by 32 cents a litre? “That ambition was fairly unrealistic,” Collins said. “There is not enough squeeze in the margins for the oil companies to give up 32 cents – that was never gonna happen.”

He added: “I don’t think it’s fair to say that the government’s responsible other than for the large tax and duty take that contributes to the price of petrol.”

With the cost of living rising across the board, both National and Act have criticised the government for not doing enough to help. Act’s David Seymour said parents shouldn’t have to choose between swimming lessons for their kids and a tank of petrol. “Rents are up, mortgage rates are on the rise, the cost of food is up, petrol is up – but wages aren’t keeping up. It’s time Kiwi battlers got some relief.”

National’s Simeon Brown, the party’s transport spokesperson, took particular issue with Auckland petrol prices due to the added regional fuel tax. Recent media reports revealed that only half of the money recouped by that tax has been spent on the intended transport projects. “The regional fuel tax should be scrapped given the revenue isn’t being used,” said Brown. “This will also benefit Aucklanders who are hurting from the cost of rapidly increasing fuel prices and high inflation.”

With the fuel tax set to stay, and fuel excise duties not due to be reviewed until July next year, prices at the pump are expected to remain volatile over the coming months. So maybe it’s time to buy a scooter?

This article was updated at 9.30am with comment from prime minister Jacinda Ardern.