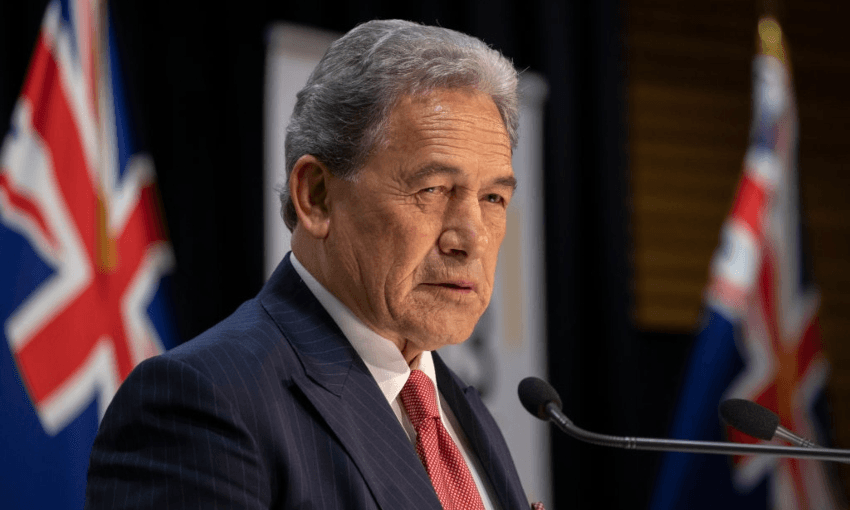 To survive from here, Winston Peters will need to reach new Houdini heights

From shambolic interviews to dismal polling, it’s hard to see how the NZ First leader can save his party ahead of the next month’s election, writes Ben Thomas.

In boxing, there’s a saying that “power is the last thing to go”. After speed, coordination and stamina are long gone, the oldest fighter still knows how to punch.

Perhaps that explains what happened with New Zealand First leader Winston Peters, whose social media “bad boys” have portrayed him as a photoshop pugilist, in his bizarre interview on TVNZ’s Q+A programme on Sunday.

He was hesitant with answers about his criticism of the government’s (his government’s) handling of Covid, refused to engage on the question of the Serious Fraud Office investigation of his party’s fundraising foundation, and insisted he couldn’t answer on other matters without being briefed. The only time the deputy prime minister sounded fluid and enlivened was unleashing a barrage of insults at host Jack Tame, muscle memory kicking in to roll out his greatest hits of disdain and contempt for the media.

Struggling to explain his newly strident public criticism of parts of his own government’s Covid response, he said the difference between then and now was “the House [of Representatives] rose and we went into an election period and that’s why I can speak freely”.

It’s certainly true that governing Peters and campaigning Peters may as well be two different people. Danyl Mclauchlan pointed out in an excellent column that his campaign promises and what he delivers in government have long been largely separate bodies of work. He campaigns on immigration and Treaty-baiting, but delivers millions to the racing industry and funding for the diplomats who attend him as foreign minister.

Others are exploiting this disjunct. No sooner had parliament adjourned than fisheries minister Stuart Nash announced $60 million was to be rolled out to equip all commercial fishing vessels with surveillance cameras over the next three years.

NZ First is understood to have repeatedly stalled the introduction of this regulatory scheme (which aims to prevent overfishing and catch dumping) for the past three years, after it was set up and ready to be implemented under the previous National government.

While Peters and Shane Jones’ links to the fishing industry are well known, stymieing cameras was never a promise they made to the Kiwi battlers who could bring his party back near the crucial 5% threshold. Peters can’t create chaos in the halls of power while he’s busy bussing around the country.

More significantly, the announcement suggests a high level of confidence that Peters and Jones will not be around after October to reverse the decision. It follows Andrew Little’s decision to create a $40 million fund for commercial lease mediations using executive powers as an end-around-run of his intransigent coalition colleagues. In other words, those best placed to know – hooked up to internal polling and focus groups – are acting as if NZ First is already gone.

Other parties are ignoring it, as Peters used to do to them. In 2017 he refused to attend minor party leaders’ debates with his customary sneer that NZ First wasn’t a minor party. This year, according to TVNZ promotion, he’s taking to the podium with the Greens and Act.

David Seymour would snipe at Peters in the hope of a reaction and the spotlight of publicity for much of the last three years; the positions are now reversed, with the resurgent Act shrugging off NZ First’s attempts to get into bunfights.

Where communities of interest have previously risen to the bait of Shane Jones’ calculated provocations, the sensible reaction now simply seems to be to wait six weeks and let the problem take care of itself.

Never write off Winston Peters, the saying goes, echoing through the ages. But against the ropes, it’s hard to see which of his traditional reserves the veteran can draw on in the month before polling begins.

Immigration can hardly be cut back more than it is in a closed pandemic world. His go-to favourite, Treaty issues, could hardly be more distant in the minds of most voters. As National has hugged the government closer on the Covid public health response, Peters has charted his own path to criticising Labour, only to find Act, the New Conservatives and the fringe Advance NZ party already there fighting over a single-digit potential voting pool.

Late to the party, he’s nowhere near extreme enough to satisfy the obvious crazies, and nor can he claim to have been a handbrake on the Covid Committee he sat on with Ardern.

That leaves Peters’ legendary campaigning, which helped deliver an extraordinary win in the Northland byelection in 2015. Four years earlier, he became the first (and still only) person to successfully lead a party back into parliament in the MMP era after the public dumped NZ First in 2008. Noticeably, NZ First’s social media footage of his trip to Otago University yesterday was a slick edit of Peters playing table tennis (with little footage of his opponent or where his ball landed), emphasising an impression of vigour so absent over the weekend.

Yet even the hardiest campaigners are exhausted by the parliamentary year, by the pandemic, and by the unplanned extension of the contest by a further four weeks. Photos of Peters’ admittedly brief bus tour before the second lockdown showed small crowds. The old razzle-dazzle is looking old, but not particularly dazzling.